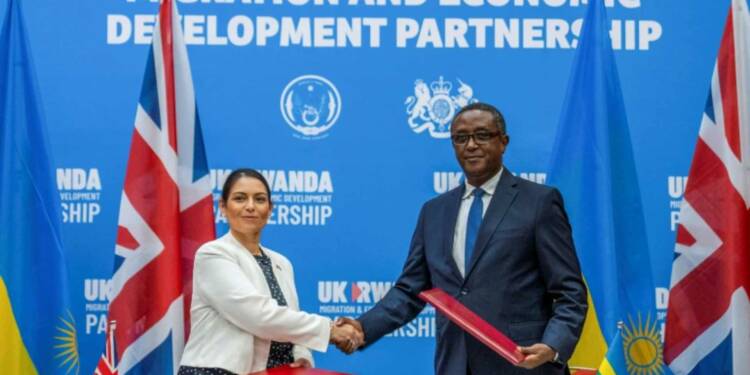 The United Kingdom and Rwanda agreed to the Migration and Economic Development Partnership on 14 April 2022. The arrangement allows the UK to send an unspecified number of its asylum seekers to Rwanda. In return, the UK is providing £120 million for a development fund and to cover processing costs for resettled asylum seekers. Since the announcement, the asylum arrangement has received criticism from several international and domestic actors. The agreement could spell a doom on an already battered African country.

According to recent reports, the British judiciary gave the green on light Monday to the deportation to Rwanda of asylum seekers who arrived illegally in the United Kingdom, a highly controversial project that the government wants to deploy as soon as possible.

One of Brexit’s promises was to combat illegal immigration, and the Conservatives have made this a top priority.

But there have never been this many migrants travelling in small boats over the English Channel.

The government of Boris Johnson and Kigali came to an agreement in April to return all asylum seekers who entered the country unlawfully to Rwanda, regardless of their country of origin, a measure intended to restrict small boat crossings of the English Channel that has received heavy criticism. Now that the court has given its decision, the government of Rishi Sunak wants to move quickly.

Despite assurances of seamless operations from the UK government, it is unclear how asylum seekers who have been transported from the UK would be settled in Rwanda, beyond short-term plans to turn a former hostel into a prison facility. Furthermore, it is unclear what would happen to those who are refused refuge.

Also Read: Rwanda ought to be sanctioned, yet receives $319 Millions to fuel unsettled DRC

Human rights, international, and religious organisations are disputing the legitimacy of this procedure. However, this effort to outsource the immigration process is not original. It is a part of a larger policy used by the strong governments of wealthier countries, from Australia to the EU, to deter undesired immigration by fostering hostile or inhumane conditions.

And while they outsource migration management to low-income countries, these richer countries are furthering their own geopolitical interests. Human displacement is becoming a motor for what experts identify as 21st-century imperialism. Migration is not merely a consequence of poverty, inequalities, conflict and environmental crises. It is a political tool.

Sending asylum seekers to another country strips them of their right, as afforded by the International Refugee Convention, to have their cases considered in the country in which they have chosen to seek refuge. It denies them agency. It doubles their displacement. And it exposes them to prolonged uncertainty and further risk, namely, Rwanda’s worrying human rights record. In 2018, in particular, a dozen refugees were reportedly killed by Rwandan police after protests outside the offices of the UN high commissioner regarding refugees in Karongi district.

Research shows that plans like these are a strategy of empowerment for already powerful nations. They allow them to offload, unwanted migrants, back to poorer countries, especially those who come from outside of Europe. At the same, they give those richer nations a political and economic foothold in regions of interest.

The UK’s offer of £120 million to kickstart this partnership is attractive for Rwanda precisely because it comes under the aegis of development.

Additionally, we are aware of the extent of administrative corruption in Rwanda. Most of this money would be devoured by the government, leaving no funds for the general public.

Besides this, Rwanda is notorious for its history of genocide. In just 100 days in 1994, ethnically Hutu extremists massacred around 800,000 people in Rwanda. Regardless of their ethnic background, they were targeting members of the minority Tutsi group as well as their political adversaries.

A nation with such a turbulent ethnic past would undoubtedly not be a good recipient of asylum seekers from different nationalities.

The Rwanda plan reveals unsettling echoes of the UK’s imperial past, including the colonial transport of slaves and indentured labourers across continents and oceans and the empowerment of the imperial heartland through the violence that accompanied its historical atrocities, for which reparation will never be fully accomplished. It forces Africa to once more serve the UK’s interests in exchange for only transient financial gains, in a repetition of colonial politics. Africa’s long-term demands are still unmet.