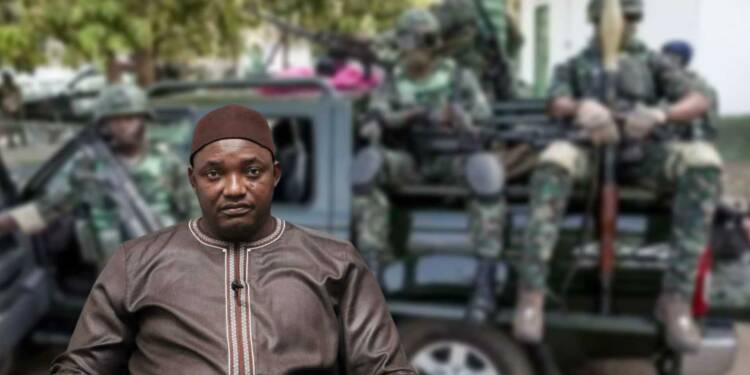 Gambia Military coup : Being an ally of the US has proved to be costly for African nations. Many countries in Africa today are going through one or the other crisis many of which are created by the neo-colonial policies of the West. Africa is in chaos and one of the most pressing issues of the continent is the unrelenting coups that have wreaked havoc across Africa. As a matter of fact, out of 486 attempted or successful coups carried out around the world since 1950, Africa has seen 214, the most of any region, with 106 of them successful. Now, there’s another attempt of coup in an African nation recently.

As per a report, Gambia government has confirmed an “attempted” Military coup in the country against the administration of President Adama Barrow and authorities have arrested four people. This marks the first such defiance to the government of Adama Barrow, who defeated Mr Jammeh, whose 22-year rule was marked by state repression and brutality, in December 2016, and won a second term last year.

The government of Adama Barrow has lost its popularity and the trust of Gambians after many of his antics. His government is backed by the US and enjoys strong support from the Biden administration. However, recently, strong anti-West sentiments have swept through Africa. It is the Western countries which prolong their presence in Africa in the name of security or economic assistance to meet their own geopolitical goals. Countries like the US have tried to achieve their own goals even at the cost of pushing countries into chaos by various means.

Gambia will meet the same fate

In countries like Burkina Faso, the anti-west sentiments have become stronger than ever. French military’s presence in the country has been rejected and demonstrators also attacked the French embassy in the capital after a Military coup.

The US for long has only exacerbated the crisis in DRC by indirectly backing Rwanda and its M23 rebels but threw Rwanda under the bus to absolve itself of its crimes.

The US is also responsible for the refugee crisis in Malawi as people from neighbouring Democratic Republic of Congo are fleeing violence and destruction caused by the M23.

In the case of Tunisia too, the West abandoned it after the Russia-Ukraine war and fuelled a crisis by taking away its supplies coming through European waters.

Read More: One vote against Russia turns Tunisia into a parasite nation deriving aid from US

Thus, examples of the US abandoning or aiding its “allies” in Africa according to its convenience are plenty. Now it seems, Gambia too is on the same path. So far, it has been an ally of the US and received US aid in the past.

Now, it was only likely that Gambia’s puppet regime lose public’s confidence over time. The support for the Gambian government have been declining and Barrow has been losing credibility throughout the country now for quite some time and he has only himself to blame. As per reports, many senior officers left the army after Mr Barrow took office. He has been distrustful of the military and has troops from neighbouring Senegal in charge of his personal security. Further, the main international airport and sea port are guarded by troops from Nigeria and Ghana respectively. This is one of the reasons which has made him unpopular among Gambians who feel that he has undermined the country’s sovereignty by relying on foreign forces.

Finally rising opposition against his government has resulted in a Military coup in Gambia. Chaos looms large on Gambia today. Only time will tell if the popular discontent in Gambia will be addressed by its government or it will become another African country standing on the verge of massive domestic chaos and conflict with a helpless US puppet leadership.