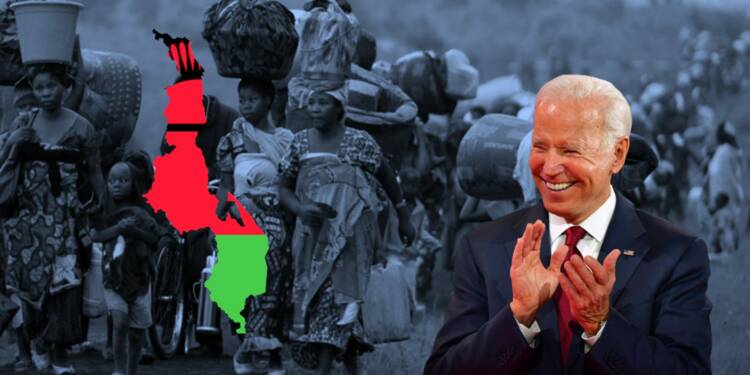 Malawi, a southern African nation, is currently struggling with a refugee crisis. People fleeing violence and destruction in the neighbouring Democratic Republic of Congo are coming in huge numbers. The refugee camp in the country, known as the Dzaleka, which has the capacity to accommodate 10,000, is witnessing 56,000 refugees.

A representative of the UN food aid agency said, “Conflicts in the Great Lakes region, particularly in the Democratic Republic of Congo, have resulted in a steady flow of refugees into Malawi for more than two decades, with a recent surge in new arrivals.”

Last year in March, Malawi saw 49,000 refugees in its camp. This is causing a major issue. Just this week, refugees attacked and took control of a World Food Programme.

DRC’s eastern territory is dealing with frequent attacks from the M23 terror group resulting in a refugee crisis. Refugees from DRC are filling into the neighboring countries and Malawi is one of them. The border of Malawi has also become a transit route for refugees from nations like Ethiopia.

In fact, this year a mass grave was discovered in northern Malawi’s district of Mzimba which contained thirty bodies. The investigation revealed that the deceased were Ethiopian nationals who were travelling in a truck when they suffocated which suggested a case of human trafficking.

Similarly, police intercepted 221 migrants this year, out of which 186 were Ethiopians. The Malawian government is also going to deport six hundred Ethiopians currently in its custody.

Read more: M23 goes all guns blazing against West, and it has William Ruto written all over it

Malawi: A Puppet of Biden

When it comes to foreign policy, Malawi has close relations with the West. In fact, US president Joe Biden praised the Malawian president Dr. Lazarus Maccathy Chakwera for taking action against corruption. The Secretary of State Anthony Blinken commended Chakwera for reinforcing the anti-corruption bureau of Malawi.

In September, the US provided Malawi with $350 million financial assistance for its infrastructure projects and hailed Chakwera’s governance. The fund was meant for a road network connecting rural and urban areas of the country. Blinken stated, “These projects will be transparent. They’ll be collaborative and built to meet the highest standards of quality.” (sic)

Malawi also supported the West in its attempt to counter Russia by voting in favour of Ukraine during the UN resolution vote. Chakwera joined other Western nations in condemning Russia for its military action, stating, “The declaration and acts of war by Russia against Ukraine are a disturbing and destabilizing development, since Malawi’s national anthem is a prayer petitioning God for peace over our land, we pray for peace for the people of Russia and Ukraine and their lands,” (sic)

During a phone conversation with Ukrainian president Volodymyr Zelensky, Chakwera assured him of Malawi’s support and held Russia responsible for the rising food prices and inflation.

The West is responsible for Malawi’s refugee issue

Now, we at TFI explained how the M23, the terror group wreaking havoc in eastern DRC, is financed and backed by the US and Europe. On the instructions of Biden and his partners, the group has taken control of several areas of DRC which are rich in mineral wealth. It has created an atmosphere of fear, due to which many Congolese people are compelled to leave their homes and possessions and migrate to neighbouring countries like Malawi. In fact, most refugees in Malawi are Congolese.

In Ethiopia too, the US backed TPLF’s war crimes has led to many people fleeing their homes and migrating to Malawi.

Both M23 and TPLF have created a catastrophic situation for Malawi which doesn’t have enough resources and wealth to deal with the refugee problem. The very leaders which Chakera considers as partners are responsible for current refugee crisis.

Malawi will soon realise that establishing relations with the West was a blunder. As the West is fond of overthrowing the democratically elected governments and establish influence in Africa through tyranny.