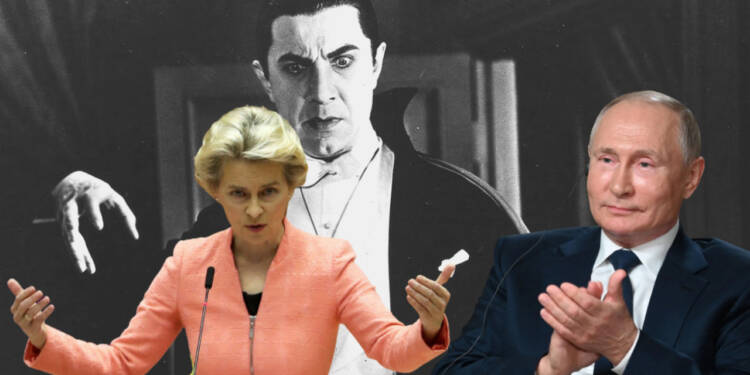 The West imposing sanctions on Russia was mere brow-beating. The EU thought of threatening Russia with a spate of sanctions but what actually happened? Did Russia stop its military operation in Ukraine? Or did it hurt Russia’s economic prospects? The EU imposed sanctions with the view of wiping billions of Euros from Russia’s coffers but the EU’s ended up digging its own grave. It now finds itself stuck in a quagmire. So, the EU came up with a plan. A plan to mislead the Europeans. It still continues to buy goods from Belarus evading the sanctions it imposed. On paper the EU has still sanctioned Russia but sneakily it has accepted Russia’s hegemony.

Little did the West know that by sanctioning Russia, it was playing with its own fate. It is only after this move Europe realised its over dependence on Russia. Be it oil, gasoline or even wood Europe is surviving at Russia’s mercy.

Shortly after placing bans on wood imports from Russia and Belarus, Europe experienced an influx of timber allegedly from Kazakhstan and Kyrgyzstan. Authorities claim that sanction violators are increasingly mislabelling wood as Central Asian in order to continue smuggling it into the EU.

In response to Ukraine’s invasion, the European Union prohibited wood imports from Russia and Belarus, two of the bloc’s main suppliers, threatening to wipe billions of euros from their budgets.

However, according to a new investigation conducted by the Belarusian Investigative Centre (BIC), Siena, and a network of OCCRP partners, timber businesses are circumventing these limits by submitting false paperwork saying that their shipments are from Kazakhstan or Kyrgyzstan.

Read More: Spain reaps the benefits of being neutral amid the Russia-Ukraine war

Reporters discovered many organisations openly offering to supply bogus papers for Russian and Belarussian wood so their clients can illegally sell it in Europe, as costs for many timber products have skyrocketed since the EU imposed sanctions.

On paper, the EU’s imports of wood from the two Central Asian republics increased from roughly 445,000 euros in 2020 and 2021 to more than 30 million euros between June and October 2022, when the sanctions were imposed. Despite this, Kazakhstan and Kyrgyzstan have limited forests — trees comprise less than 6% of their land area — and both have stopped exporting most forms of wood since late 2021.

According to Eurostat trade data, the majority of the ostensibly ‘Central Asian timber’ has ended up in Lithuania, Poland, Germany, Denmark, and Latvia. From June to October, these five countries accounted for 93 percent of the wood entering the EU reportedly from Kazakhstan and Kyrgyzstan.

But, this data is designed to just mislead the world. The same countries that never shy away condemning Russia on the world stage are sneakily filling their reserves with sanctioned Russian goods.

Customs officials in Lithuania and Latvia, which border Belarus and have historically been significant transit routes for Belarusian commodities into the EU, are scrambling to keep up with the unexpected surge of doubtful timber.

Read More: EU gulped down $200 billion of Russian money without a single burp

Inside shipments of wood purportedly from Central Asia, he said, “we find markings on packaging, extra sets of documents that directly show that the goods come from Russia or Belarus.”

Well, no matter how hard the EU tries to deceive the world, its longstanding dependency on Russia is a well-known fact. Now, the Union has realised that it itself has thrown its fate into the abyss. So, now the EU is in a bid for course correction although sneakily.  EU must not forget, that no matter how much one tries to bury the truth, eventually it will prevail.