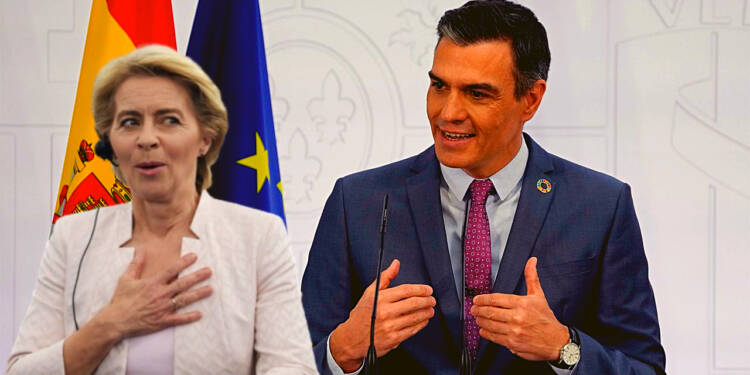 Russia invaded only Ukraine but the whole Western world came forward to share the brunt. The war has seen some really powerful behemoths of countries falling to pieces. They themselves pushed their fate into the abyss by blindly following the Western diktats, but some countries were smart enough to stay neutral. One such country was Spain which is now reaping the benefits of toeing a fine line between the West and Russia.

The Russo-Ukraine war had most parts of the world imposing sanctions on Russia which did nothing but propelled those nations into crises of sorts. From gas and oil to even food insecurities, these nations came to a consensus with the reality of their dependence on Russia. Europe in its bid to counter the Russian hegemony in the energy sector forgot that it survives on Putin’s mercy.

They later realised the importance of Russian imports when winter came knocking their doors, but then they were left with no options rather than to face the ire of Russia. However, some nations were blessed owing to their neutrality over the issue. Spain was one of them. Putin’s energy diplomacy has been quite successful in Spain, where Russia even overtook Algeria as the traditional gas exporter to this nation to become Spain’s second-largest natural gas supplier in terms of volume. Hence, turning Spain into the most Russia-dovish country in Europe.

Moreover, the country also signed an accord with France ensuring more energy security for the nation. Spain and France have reached an agreement to build an underwater gas pipeline from Barcelona to Marseille, effectively cancelling a long-stalled pipeline project that would have linked the two nations over the Pyrenees. The pipeline will allow Spain and Portugal, two of the world’s largest importers of liquefied natural gas (LNG), to transport excess supplies to France and other European countries.

LNG has emerged as the go-to commodity for replacing the massive quantities of Russian gas cut off by the Kremlin since the start of the Ukrainian war. While other countries are struggling to survive the chilling winter, Spain is busy ensuring its energy supplies. The agreement was announced by Spanish Prime Minister Pedro Sánchez, French President Emmanuel Macron, and Portuguese Prime Minister António Costa, ahead of an EU summit in Brussels on the energy crisis.

“This is very good news for Europe,” Sánchez told reporters, before heading into the meeting. “This solidarity is coherent with our green transition.”

“The objective is to be better connected to the rest of the continent for Spain and Portugal,” Macron said. The deal means that the MidCat project is officially abandoned, the leaders confirmed.

This historic deal guaranteed Spain’s energy needs as well as those of its European regional allies. Simultaneously, Spain and Portugal also agreed to complete another gas interconnection, CelZa, between Celourico do Beira and Zamora. In addition, Spain and France also agreed to work together to establish a new electrical connection over the Bay of Biscay, as well as identify similar initiatives.

Read More: The Spanish government is going to slap a €600k fine on you to fund its sanctions on Russia

The country that remained silent on the issue of the Russia-Ukraine war unlike its counterparts, is now emerging as a ray of hope for them. While the mindless lot of European countries led by Germany and the UK were busy exacerbating their self-made crisis by taking an anti-Russia stance, Spain secured its nation’s interests first. While the other countries were scrambling to find alternatives to the Russian gas, Spain kept on sourcing its supplies from Russia.

The Russian dovish Spain has enough energy reserves to smoothly survive this winter and the smart country has even started prepping up for other winters to come. While the western countries are paying the price of their deeds, Spain is reaping the benefits.