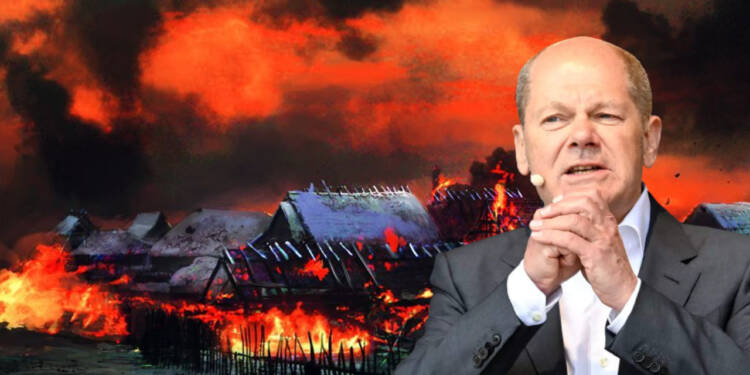 Germany dreams of relying 80% on renewable energy and getting rid of non-renewable sources of energy. But, in reality, Germans today are not even able to warm their homes entirely based on their energy resources. Thanks to Berlin’s own nonsensical attempt to impose sanctions on Russia, Germans are suffering.

Today, Russia has effectively turned the conflict in Ukraine into an energy war, with Germans as the most unfortunate victims. Sadly, even the German government is not ready to accompany them. Instead, the government is dragging them out of their homes and razing their homes just to search for coal.

Germany of 2023 is turning mad for coal. Over the last eight months, German hard coal-fired power stations have re-started operations, which were being phased out because of the hugely detrimental climate impact on a world already ravaged by global warming. Goal of Germany had been to phase out all coal-generated electricity by 2038.

However, the administration is currently taking the painful medicine of reintroducing coal-fired electricity to the system. It is intended that this would take the place of the 10% of gas-fired electricity that currently fuels Germany. For this, Germany is not hesitating to harass and coerce common Germans.

Villages in Western Germany have to be razed to allow the expansion of a coal mine, a plan that is drawing resistance from climate activists. Reportedly, the hamlet is to be demolished to expand the Garzweiler lignite mine, despite protests from environmentalists who fear millions more tons of heat-trapping carbon dioxide will be released into the atmosphere.

The Heinsberg county administration has issued an order barring people from Luetzerath stressing that, if they fail to leave, police will start to clear the village from January 10 onward. As a result, Germans residing in violence started rioting.

Immediately after the issuing of the order, scuffles broke out outside the village in western Germany which is to be razed to allow the expansion of a coal mine. Protestors threw fireworks, bottles and stones at police outside the village of Luetzerath before the situation calmed down and officers pulled back. This is not the first time that there have been riots. Germans in the east have been particularly hard-hit by the cost-of-living crisis since they earn less, have smaller pensions, and have less long-term capital accumulation. Even last month, riots and unrest occurred in Germany against the chancellor Olaf Scholz. The protests were warmly appreciated by Germans across the country.

The protesters have demanded that the government must lift its sanctions against Russia in order to reduce the cost of living crisis. They have also called for the removal of rent restrictions and coronavirus restrictions, as well as “an end to all the insanity,” after the Ukraine war.

Germany: The push for coal is insane

One needs to understand that at this point in time, the only elixir to survive amidst the harsh winters is coal, which Germany wanted to end its reliance on by 2038. But now, Germany is poised to be one of the few nations in the European Union to increase coal imports this year.

At this point in time, the Deutsch officials are not even hesitant to restart the old closed coal mines to restart production. And sadly, one such coal mine is beneath the village of Luetzerath. The villagers are not ready to vacate their houses and hence, the situation is at a complete deadlock.

The residents of Luetzerath used all of their savings to construct their homes, but they had no idea that a dictator would arrive with his army to drag them out of their homes. And you think there’s only one village in the plans to be erased?

No, in East Germany, there are thousands of them. Their security, wealth, and lives are in jeopardy right now.