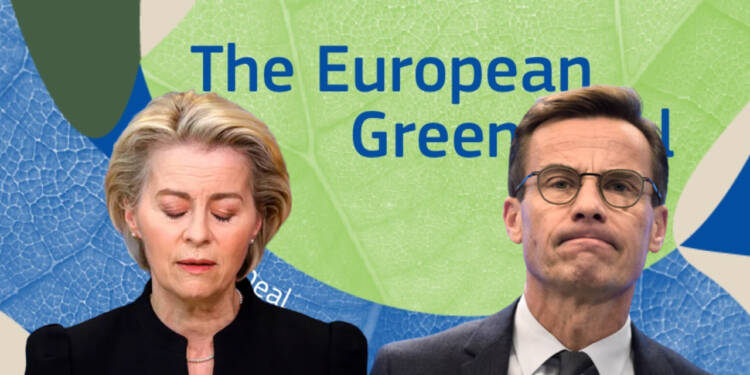 Sweden takes over EU presidency: As the new year begins, the EU is in sorrow. And the reason is Sweden. While prosperity bells are ringing in the rest of the world, Sweden has rung EU’s death knell. The European Union is heading towards a difficult summer because one of its longstanding and staunch foes has taken on the presidency with a befitting reply to the EU’s green madness.

Brussels already had nightmares of Sweden bogging down its diktats once it took on the baton and guess what? Brussel’s fears have already started to materialise.

Sweden recently took the EU presidency from the Czech Republic on January 1 which has given sleepless nights to the bloc. The European Union was worried about Sweden’s mandate laid by PM Kristersson recently. The mandate did not talk about the EU’s much-touted climate goals.

You see, except when urged to cut down fewer trees, Sweden is an outspoken supporter of the EU’s environmental goals. 70 percent of the country of Sweden is covered with forests making it one of the bloc’s largest carbon sinks. But, Swedish MEPs insist that their country’s national treasure shouldn’t be treated as a giant airbag to make up for other countries’ insufficient emissions cuts.

Sweden, along with other heavily forested nations like Finland and Austria, has been pitted against the rest of the EU on the grounds that the European Commission shouldn’t interfere with national forest management policies. This argument has been at the centre of discussions about the European Green Deal in Brussels.

Sweden will have to advance important policy files that will have an impact on forestry during its six-month EU Council presidency, including a new regulation intended to boost nature restoration, a proposal for certifying carbon removals, and an EU Forest Monitoring Framework — and be expected to quiet its critics. However, environmentalists are concerned that it won’t, and the Swedish forestry industry, which accounts for more than 10% of the national economy, is urging Sweden to utilise its presidency to voice its worries in Brussels.

“Sweden can be progressive on climate policy just because we have a sustainable forestry sector, which aids our climate work while benefiting our economy enormously,” said Jessica Polfjärd, an MEP with the center-right European People’s Party and member of the Swedish Moderate Party — which is part of the country’s coalition government. “And I don’t think it’s proper that our forestry sector should be regulated by people with little or no understanding of this.”

Even Green MEP Pär Holmgren agreed that “it is important that we don’t regard the forest in Sweden as the big solution for all of Europe” and urged each nation and sector to contribute to the reduction of emissions.

The EU’s institutional architecture gives Sweden with the rotating six-month presidency of the Council of the EU a central role in setting and progressing the bloc’s policy agenda. And, Sweden is very clear on its priorities. The bloc’s opposition parties have raised concerns over the country’s stature which does not talk about climate. The liberal caucus of the bloc is going all out against Kristersson’s proposed mandate.

You see, Sweden is one of those countries which has always been at tussle with the EU when it came to either its policies or its stance over the Russo-Ukraine conflict. It has outrightly denied following the EU’s irrational climate policies as earning bread is more necessary for the country rather than bickering about first-world issues.