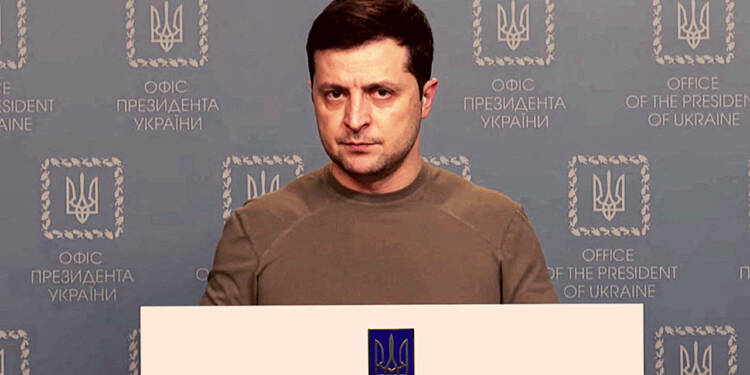 Zelensky controversial law: The Russo-Ukraine conflict has turned the latter into an authoritarian regime. Zelensky is the new dictator-in-making of Europe. His nation has been torn by the war. His actions have hit a jolt to his popularity on the political stage. Zelensky’s own countrymen along with the nations abroad have criticised his actions so far, which is sounding the death knell of his political career. And hence, the comedian is now in no mood to play the farce and get serious with the onset of the new year. He has now thought of playing smart and curtailing the anti-Zelensky voices in the nation.

It’s a well-known fact that if any politician starts to feel his demise is nearing, all he wants to gain control of is the media. You make the media of your country your puppet and play with the magic bullet theory of the media. We are aware that every message in the media is a shot fired directly from the “media gun” into the viewer’s mind. So, what if you go for controlling the media?

You’ve already won the game. Well, this is how governments like that in Canada are continuing to stay in power. But, this won’t go well for the Ukrainians. The country is already war-ravaged and the countrymen are full of aggression against Zelensky’s regime. They have already lost the right to live peacefully owing to his mindless exacerbation of the war and now he is trying to do a course-correction, well not by altering his actions but by controlling the media.

Ukraine has been in the bid of becoming a part of the EU. The country eyes its future in the bloc to safeguard it from facing any further military aggressions. But, owing to this, one must not forget that the dictator does not want to hurt his political career and wants to enjoy staying in power. As elections are approaching in Ukraine, Zelensky is prepping up to pour cold water on all his wrongs and portray himself in a good light. He wants to muzzle the voice of independent media in the country that go against his diktats by signing a new controversial law.

Although lawmakers are saying the bill passed will help the country in securing its seat in the European Union but the devil lies in the details. Journalists have denounced it as a move toward censorship. A bill that broadens the government’s regulatory authority over the news media was signed into law by Ukrainian President Volodymyr Zelensky on Thursday. Journalistic organisations have warned that this policy could weaken press freedoms in the nation.

While some of the law’s more stringent provisions were relaxed in response to criticism, serious concerns about the independence of the regulatory body remained, domestic and international news media groups said on Friday, noting that they were still reviewing details of the final 279-page legislation.

The controversial law broadens the scope of the official broadcasting regulator in Ukraine to include both print and internet news outlets. According to the Ukrainian news media, earlier drafts of the law gave the regulator the authority to fine news media outlets, revoke their licences, temporarily block specific online outlets without a court order, and ask social media platforms and search giants like Google to remove content that contravenes the law.

A law tightening media regulation was requested to be written in 2019 by Mr. Zelensky, whose administration has been accused of weakening press freedom in recent years.

This month, the Ukrainian Parliament approved the proposal along with a number of other bills that, according to legislators, were meant to assist their nation in meeting the requirements set forth by the European Union in order to become a member.

Well, this is what Mr. Zelensky wants us to believe but his underlying intentions are way clearer than he thinks. In the name of securing membership in the bloc, he is tricking his people and his country’s media. He has realised that he has already lost the war against Moscow very
dismally and now he is in a bid to at least secure his presidential chair.