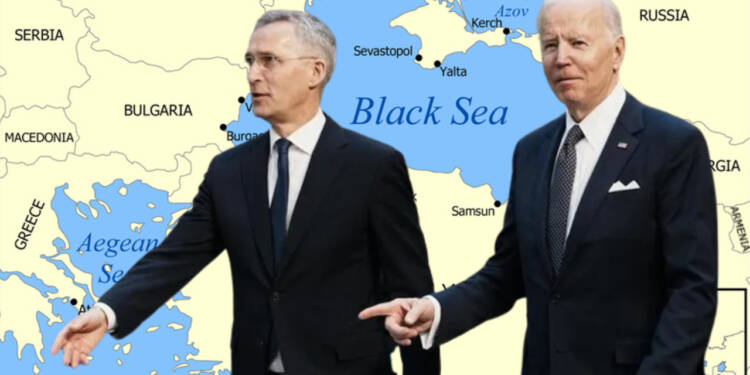 The Black Sea, located at the crossroads of Europe and Asia, has for centuries been a strategic maritime zone for many nations. Its strategic location and abundance of resources, both natural and human, have made it an important area for global powers.

However, in recent years, the Black Sea has become increasingly neglected by both NATO and the European Union (EU), leading to a dearth of security and economic opportunities for the region. Had NATO not left the region, the Ukraine war could have been easily prevented.

The Black Sea has been subject to a number of conflicts in the past, including the Crimean War between Russia and the Ottoman Empire, and the Russo-Turkish War, both of which ended in victory for Russia. This strategic importance has continued to this day, as the Black Sea is a key maritime corridor for Russia and other countries in the region. However, despite its importance, NATO and the EU have largely ignored the region in recent years, as evidenced by their reluctance to invest in regional security or promote regional economic development.

The lack of attention from NATO and the EU has resulted in a number of security and economic issues for the region. It has given Russia the upper hand in the area and regional politics.

When the Soviet Union collapsed in 1991, a false impression of long-term stability developed. It seemed that geopolitical equilibrium would be the new reality of the region.

The NATO’s Exercise Sea Breeze and the Black Sea Economic Cooperation have failed to fulfil their purpose. The Black Sea region’s importance to Russia and its stated and demonstrated resolve to maintain it as a Western buffer zone has gone unnoticed and unappreciated. A Black Sea strategy has not been discussed by NATO or the EU due to differences in member states’ interests and assessments of the threat.

In addition, on the security front, there has been an increase in illegal activities such as smuggling and human trafficking. This has been exacerbated by the lack of a unified security presence in the region, as the countries in the region often operate independently of one another. This has allowed criminal networks to take advantage of the lack of oversight and to operate relatively unhindered in the region.

Further, EU’s ignorance of the Balkan States of Bulgaria and Romania has amplified Russia’s boldness in the region. Russia has stoked wars (Transnistria, Nagorno-Karabakh, Abkhazia, and South Ossetia) over the past three decades by using the entire Black Sea region as a barrier to the West.

The war in Ukraine is a painful reminder of the region’s strategic significance and the necessity of a regional strategy provided by the conflict.

The extent to which Ukraine’s actions can affect the problems and have economic repercussions was made clear by this year’s grain crisis. Despite efforts to modernise, the military fleets of Romania and Bulgaria are subpar, and significant improvement will take years.

Despite the current political challenges, the notion of a Romanian-Bulgarian-Turkish flotilla, which was proposed in 2016 never materialised. Security in the region still depends heavily on cooperation with Turkey, which controls access to the Black Sea via the Bosporus and Dardanelles straits and has a robust and modern fleet. But Turkey has sided with Russia in most of the situations or opted to be neutral despite being a part of NATO.

On the economic front, the lack of investment from NATO and the EU has also had a negative impact. The region is home to a number of resources, including oil, gas, and fisheries, but the lack of investment has meant that these resources are not being properly exploited. The Black Sea could help Europe in finding alternatives to Russian gas. According to rough calculations, the Ukrainian shelf might hold more than two trillion cubic metres of gas. This has resulted in a decrease in economic activity, which has had a knock-on effect on the region’s overall economic health.

Overall, NATO and the EU’s neglect of the Black Sea has had a negative impact on the region. It has resulted in increased security and economic issues, as well as a decrease in regional stability. If they had focused on the Black Sea, the Ukraine war could have been very well prevented.