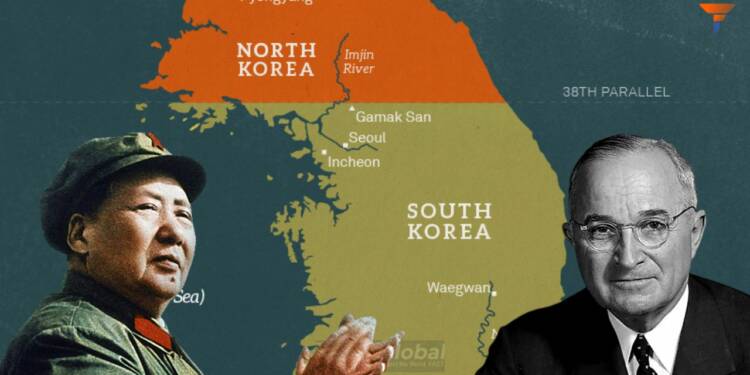 The time period of 1930-1950 witnessed one of the most bloodshed moments in the history of Korea. The armed forces of each side fought a series of bloody battles along the border from 1948 until the start of the civil war on June 25, 1950. The Korean War began in 1950 when North Korean forces invaded South Korea, which led to a dramatic rise in hostilities. In order to defend the South, the UN sent a force commanded by the US.

North and South Korea agreed not to invade one another after the war, and POWs were given their freedom. However, a number of American POWs at that time opted to go to China rather than the USA. This is so because during the Korean War, China was able to persuade American soldiers to boycott their country, and this moment was recorded as one of the US’s most incredible tragedies.

Although the Geneva Conventions were in place during the 1950 Korean War, it has been noted repeatedly that the convention’s provisions have frequently been mocked here and there.The POWs are frequently beaten for specific reasons.

To reveal military strategies and secrets, and occasionally to concede defeat, POWs have been the most victimized group in human history.

During the 1950 Korean war, the United States came to the aid of South Korea, heading the United Nations force composed of more than a dozen countries.

As a repercussion, Communist China joined North Korea in the war in November 1950, unleashing a massive Chinese ground attack against American forces. The Soviet Union also covertly supported North Korea. In the end, some 1,780,000 Americans served in the war, with 36,574 killed, 103,284 wounded, and 4,714 taken as prisoners of war.

While the Korean army was fond of thrashing American POWs, the Chinese military was able to persuade American POWs to accept US’ wrongdoing, that too without a single slap.

At the end of the Korean War, thousands of prisoners from both sides had to choose whether to return home or stay with their captors. The method was so effective that several American soldiers chose to travel to China instead of the USA. In Chinese camps, the vast majority of American soldiers betrayed their allegiances. What led to this? Why did American soldiers rebel against their country and brothers?

American POWs in North Korean prison camps faced harsh punishment, but prisoners ending up in Chinese-run camps often faced a very different situation. We base that statement on   “The Interrogation Rooms of the Korean War,” a book by Monica Kim, an assistant professor of history at New York University.

As per Kim, China utilized a “lenient policy” with subtle psychological attacks so successfully that psychologists studied it in depth after the war.

China literally brainwashed hundreds of American soldiers to go against their own capitalist nation and embrace communism.

Small commitments can result in significant behavioral changes. You cannot evade or hide from written declarations of your commitment because they offer tangible proof of it. Chinese guards changed POWs’ perceptions of themselves by making them write instead of speaking verbally.

Using a really soft tone with American POWs, the Chinese initially persuaded prisoners to write seemingly mild and relatively true statements like “The United States is not perfect” and “Communist countries provide employment for all.”

Over time, they pushed POWs to make ever more substantive statements like providing lists of U.S. imperfections and then signing their name to them by befriending them with bribes like drinks and cigarettes.

POWs opted for China over the USA

Thousands of prisoners from both sides had to decide whether to go home or stay with their captors at the end of the Korean War. One of the few American soldiers who decided to go to China was David Hawkins.

When David Hawkins was wounded in battle and taken prisoner, he was only 17 years old. After spending more than three years as a prisoner of war, he made the decision not to go back home.

According to Mr. Hawkins, who is now 78 and resides in California, the Chinese military embraced this socialism so he now wanted to see what it looks like.

Another such case was American soldier William White, who was taken prisoner during the Korean war and stayed in China for 11 years, studying law in Beijing and marrying a local. He eventually moved to the US with his family via Hong Kong in 1965.

Even though he gave the same excuse, he also wanted to see what life was like in China and learn the Chinese language.

More than 21 U.S. POWs  announced that they had chosen to not repatriate to the United States and would instead stay in China at the close of the fighting on the battlefields.

But, you cannot term them traitors, they were brainwashed and coerced. And China has a long history of doing such debauching.

Several Indian men were brainwashed by Chinese nurses to marry them and embrace China rather than India even during the 1962 Indo-China War. Narratives and mind games are used to wage war in minds as well as on the battlefield.