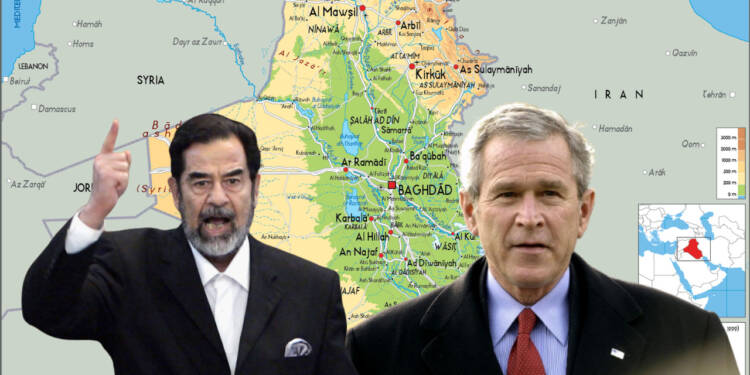 US Invasion of Iraq: ‘The world was told that Iraq is in possession of weapons of mass destruction and thus they need to be destroyed for the sake of mankind.’ What followed is not hidden from the world, the horrors of Iraq invasion are still fresh in the minds of not only millions of Iraqis but also of the troops and their families.

But has one ever given a thought to the point that why only Iraq? Even neighbouring Iran, or for that matter of fact even North Korea is in possession of such weapons but the USA has refrained to invade them. Now let me tell you the truth- Nuclear weapons are in themselves one of the biggest deterrents for any sort of invasion. The USA was well aware that Iraq had no such weapons and that is why it went forward and invaded it.

Then what is the reason behind the invasion of Iraq that left generations of people scarred for life?  Truth be told, every action that is taken by any country especially those like USA, and UK etc, have a hidden agenda and that is to control strategic locations to safeguard one’s own geopolitical interests.

Thinkers like Morgenthau have always said that the world system is one marred by anarchy, where every country is concerned with its national interest and takes every action to uphold the same.

The invasion of Iraq is one such episode, where actions were taken by the US to secure its geo-political and geo-strategic interests and gain leverage over its contemporaries.

The location of Iraq is very important strategically. The Persian Gulf is to its south east, the Mediterranean is to its west with just Jordan and Syria in between, and it shares a long border with Iran to its east and Turkey to its north which again opens into the Black Sea. We at TFI-Global have already spoken about the relevance of the Black Sea and how the present Ukraine war is all about controlling it. The Strait of Hormuz which links the Persian Gulf to the Gulf of Oman is one, through which about 40% of the world’s crude oil is transported. So, it would be not wrong to say, that he who controls the strait controls 40 percent of the global crude oil. Was it this that attracted the USA, well maybe we can just guess.

Given its sour relations with nuclear-capable Iran, it becomes very important for the USA to have a hovering presence in its neighbourhood to not only keep an eye on it but also to take swift action if the need be. It would be very easy to counter the above-mentioned claim that the USA already had made its incursions in Kuwait, but one must not forget that Kuwait is territorially a very small country and at the end of the day, every country would want to be in control of a territorially large area.

The importance of warm water ports for Russia is not a hidden fact. The USA wants to curb Russia’s accessibility to such ports in order to deny its Navy as well as trade the growth they deserve. What better opportunity to have a hovering presence to watch over the Black Sea, Mediterranean Sea, and Caspian Sea all at once than having a significant military base in Iraq with either an installed puppet government or by turning Iraq into a vassal state.

By having Iraq under its control, it becomes easier for America to have a profound presence in the entire MENA region along with close proximity to Africa via Egypt.

The Ulterior Motive of Plunder

Iraq has been the site of one of the oldest river valley civilisations in the world, that is the Mesopotamian Civilisation and the Sumerian Civilisation. Their invaluable heritage in form of rare artefacts and treasures was stored in Iraqi museums, which were plundered by the American troops. These American troops looted and plunder the treasures of initial mankind for their masters in Washington. Who knows what did they do with the treasure, did they decorate their own museums with it or did they sell it in the international black market for antiquities are a few questions that still remain to be answered.

Also Read: US springs back into the middle east with setting Iraq on fire

A ripe ground for the weapons industry

In the aftermath of the 9/11 attacks, the USA attacked Afghanistan. It was a war theatre wherein America got a ready market for its weapons as well as its mercenaries in addition to its troops. However, the ongoing conflict in Afghanistan and the stagnant market for weapons made access to other markets—or at least the hunt for new markets—absolutely necessary for the US. What better opportunity the US could have found other than Iraq? The groundwork for creating a market in Iraq can be said to have started way back in 1998 with ‘Operation Desert Fox’ under which then president Bill Clinton had ordered the bombing of Baghdad.

With just one target fulfilling all ulterior motives, why would one let go off it? This is exactly what has been the thought process of Americans who simply believe in satiating their own interests at the cost of others.