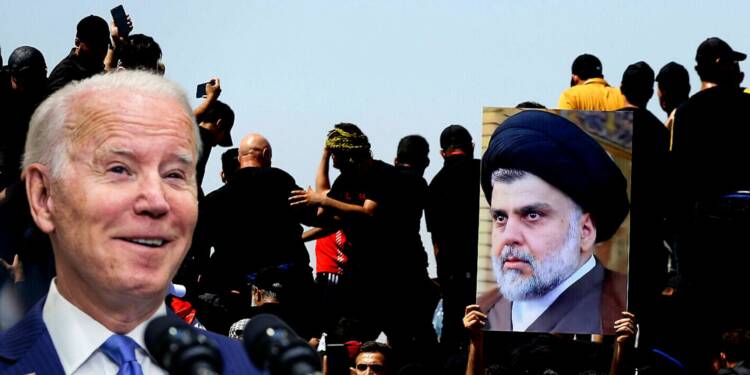 This sudden demonstration came days after protesters stormed the legislative body and suspended a session to nominate a new prime minister. Prime Minister Mustafa al-Kadhimi had issued a statement calling on security officers to guarantee the safety of state institutions.

This all cannot be considered a sign of stability, how exactly has Iraq re-entered such political turmoil again? Well, this could be happening on the behest of the United States as it wants to re-establish its dominance within the Middle East while thwarting Iran. At least the recently leaked recordings prove so.

To make the ongoing political crisis worse, former Iraqi PM, Al-Maliki’s audio recordings have got leaked. These recordings are being titled as the “Maliki Wikileaks,”. The former prime minister, who served between 2006 and 2014 is heard denouncing his political rivals and talking about an imminent civil war.

The audio also includes a scathing attack on Muqtada al-Sadr, the controversial cleric and spiritual leader to millions of Iraqi Shiites, who was accused of treachery, conspiracy and corruption.

He described Sadr as grumpy and ignorant; and accused him and his followers of cowardice. And he didn’t stop there he also accused of Sadr being an anti-Iran human and stated his nomination at the office could be the end of the nation.

Al-Sadr, whose opponents have also accused him of corruption, continues to hold significant state influence because his movement is still actively involved in governing the nation. His adherents hold influential positions within Iraqi ministries and governmental institutions, and now that this recording has gone viral, supporters of Al-Sadr are in an absolute frenzy.

Through these recordings, one thing is very certain, the protests are likely to continue hindering the process of government formation in the months to come. But, we can’t forget, that the leaked recordings have come up at a time when Iraq is legitmate fuming. And this all is probably happening at the behest of the United States.

Al-Sadr could be US’ Man at work

In one of the leaked recordings, Al Maliki has claimed that Al-Sadr is “working within a direct British project,” and honestly, he can’t be entirely wrong. Al-Sadr might not be on a British project, but he’s indeed on a US Project.

For the United States, Al-Sadr could present an opportunity to sustainably stabilize a country it has been mired in for nearly two decades. His ambition to contain Iran overlaps with the United States and its allies in the region.

Sadr had even suggested he may accept the presence of U.S. troops in Iraq in an advisory role, thus handing the Biden administration a face-saving way to remove the majority of its troops from the country. But for this, he needs to be in power and that’s not the case yet.

Furthermore, the US has a deep-rooted history of meddling in Iraqi politics. In 2003, Tens of thousands of U.S. troops deployed to Iraq for the battle to oust the country’s leader, Saddam Hussein.

Since then the US had tremendous influence inside Iraq, both politically and militarily. However, after the ISIS episode, US’ influence has decreased immensely and this is why Iran has grown its circle within Iraq. Iran was the first to back the Iraqi government, but the US withheld additional aid for two months until a new administration more in line with Washington’s preferences was constituted.

Now, with the mass resignation of the Sadrists, the prospects of a Pro-Irani majority government in Iraq is now totally devastated. Furthermore, the protests have also made the situation pretty vulnerable within Baghdad. These protest along with abusive slogans against Iran is a full-proof indication, that Al-Sadr is indeed working on US directives.