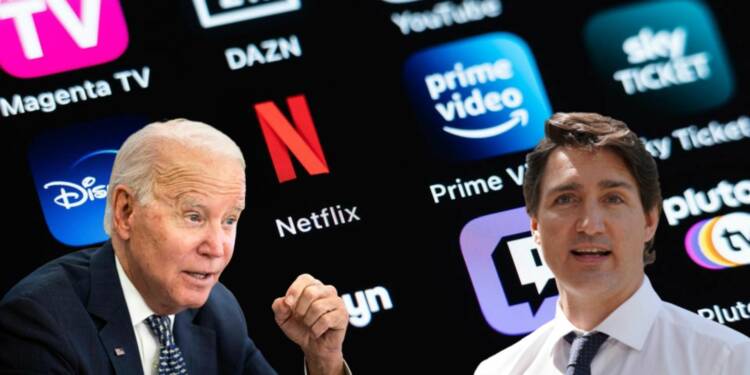 Bill C-11: Even though Canada under Justin Trudeau has frequently been referred to as a US lackey, sometimes unbelievable things do happen.

Justin Trudeau has been a supporter of the Biden administration, despite the fact that the USA has taken advantage of Canada and profited from the country’s energy misadventure while he was in office. However, Canada this time has perturbed the USA.

Because even the most impossible things can happen, Justin Trudeau has literally attacked the largest internet companies of the United States with his Bill C-11.

In a really unpredictable manner, the USA has raised an alarm about Trudeau’s Bill C-11. But, not in solidarity for Canadians, but because Trudeau appears to have attacked American giants like Netflix, YouTube and Amazon Prime.

According to a media report by global news, The US Embassy in Ottawa has alarmed that it is worried about the potential for discrimination in the controversial online streaming law being proposed by the federal Liberals.

U.S. officials are consulting with businesses about how Bill C-11 might affect their operations, according to a spokeswoman for the embassy who gave a statement to The Canadian Press.

The US spokesperson Molly Sanchez Crowe in a statement on the following development has stressed, “We have … concerns it could impact digital streaming services and discriminate against U.S. businesses,”

The concern of US

If the bill passes, platforms like YouTube, Spotify, and Netflix would be required to contribute to the creation of Canadian content and make it accessible to users only in Canada or face steep penalties.

Google-owned YouTube has stated that it is unconcerned about additional regulation. However, it has remained steadfast in its position that the bill would artificially promote some content and give the government control over what users see.

Well, the bill’s supposed intent is to have large surveillance on Canada’s internet. But now, the Trudeau government intends to bring large streaming services into the Canadian broadcasting system. It is also fuelled by the government’s claim that the bill could generate a billion dollars per year.

In order to support Canadian content funding, Trudeau wants US-based OTT giants to be required to contribute 30% of their Canadian revenues. He also wants them to be subject to discoverability rules that require 30% of the content that is recommended or surfaces in searches to be Canadian.

To be clear, no country in the world has anything close to these regulatory requirements. In Europe, most countries have no or very limited financial contribution requirements for Internet streaming services. Then why Canada has all of a sudden imposed a ‘30% rule’ on USA’s internet streaming giants? The answer could be USA’s nefarious stratagem on Canada’s energy infrastructure.

An attack on the USA

The US$8 billion Keystone XL oil pipeline, which was planned to run from Alberta to Nebraska, was officially abandoned by America. The Canadian economy was greatly impacted by this. Canada has oil, but there aren’t many ways to export it.

Additionally, Canada’s recent refusal to share LNG with Germany provided the US with a golden opportunity, which Biden didn’t waste, to render loss for Canada that too in billions. You see, Biden keeps on denting the Canadian economy in one or the other way.

Also Read: The pathetic treatment of Jordan B Peterson proves that Trudeau’s fear is real

So, this time, it’s Canada that has literally attempted to hit the market of US’ streaming giants which make billions of revenues from Canada. U.S. tech giants until now have operated unregulated in Canada, unlike local broadcasters and cable players that contribute a share of their revenues to subsidize local TV production. But does the US has any chance to challenge this move?

Of course, it has. Under the USMCA, or United States-Canada-Mexico free-trade agreement, a nation may contest a law if it believes it is discriminatory. However, if this happens, it would mark the first time in 25 years that Canada and the USA would be officially at odds with one another in the Americas.

Canada has either given the United States a severe shock for the first time in years or it has chosen a course where even its older brother will part ways from even bothering about Canada. Now is the time to wait and see how the US reacts to Canada’s attack on streaming giants.