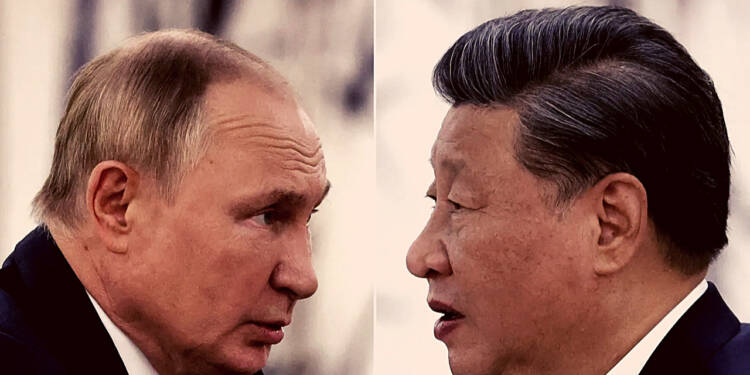 China Russia Allies – The partnership between China and Russia is marked with uncertain historical events. It is true that both have come to the defense of one another in light of West’s atrocities. However, simultaneously, the tendency to throw Moscow under the bus exhibited by Beijing is a stain on the reliability of such a relationship.

China’s rise started following its accession into the World Trade Organisation in 2003. Between the period of 2003-2014, the partnership between Russia and China operated in a way in which China acted as a big brother to Russia.

However, in the wake of Crimea’s invasion in 2014, as Moscow experienced an unprecedented level of ostracisation stemming from West’s sanctions, China started to look after its interests like a big brother in its relationship with Russia. But, Russia was not content with such a relationship.

When it comes to their allies and foes, Russia and China are the exact opposite. For instance, Russia is the main arms exporter of India which is fighting China on its border.

Read More: North Korea is finally diversifying its economy away from China with Russia’s help

India and China are involved in a territorial dispute, in fact, the confrontation between their militaries culminated in a clash near the Galwan valley which led to the death of 20 Indian soldiers and more than 40 Chinese troops. Despite a range of diplomatic and military talks, the conflict remained unresolved.

In addition to India, China is also a major buyer of Russian arms. However, lately, China’s endeavours to become a major arms supplier in the world have led to cracks in their partnerships. Beijing has time and again stolen Russian technology and know-how, which has led to friction between Xi Jinping and Vladimir Putin.

In the international geopolitical arena, Russia has always been the chief adversary of the US and Europe. China too has a tumultuous relationship with the West, marked by rivalry and diplomatic tension. But Beijing is not necessarily an enemy of the US and its allies. In fact, in several Western nations, China was looked at as a healthy partner before the Covid19 pandemic.

In 2008, China and the West were involved in a process of coming closer politically, economically and diplomatically. The ties were guided by Beijing’s national policy of reform and West’s anticipations that China would liberalise in the long run.

Apart from that, Russia and China also have a territorial dispute. During the 1960s and 1970s, clashes over the islands of Yinlong and Heixiazi took place between Beijing and Moscow.

China is also trying to populate Russia’s far east with Han-Chinese people. In fact, a Russian official, tasked with controlling the Russia-China border, told ABC News that more than a million Chinese people have illegally entered Russia’s territory in the last eighteen months.

During the vote on the UN resolution regarding the Ukraine-Russia conflict, introduced by the US and Europe to condemn Moscow’s military operation against Ukraine, China abstained from voting. Also, China’s ambassador stated that the “sovereignity and territorial integrity of all countries must be safeguarded” with regard to Ukraine.

Several US officials too said that China has stopped supporting Russia and that too when Vladimir Putin visited Beijing and both sides agreed on a stronger relationship.

Hence, the partnership between Russia and China has always been marked with unpredictability and tensions. It is true that when Moscow was struggling with tremendous isolation in the wake of its call to annex Crimea, it was China which came to its rescue. However, Beijing’s actions were motivated by larger diplomatic and geopolitical vested interests.

Jinping’s action during the Ukraine controversy in the UN is a testament to this fact. If China is under the belief that Russia will look after its interests, then it is making a blunder. Thus it would be wrong to call China Russia allies.

State some 10 economic benefits of rivers and lakes

Difference between Rabi and Kharif crops and Definition