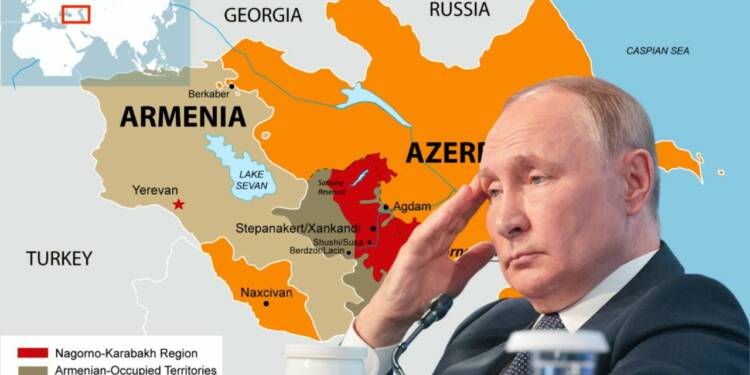 Dark clouds are gathering on Armenia for some time now. A tragedy is about to happen in Eurasia’s South Caucasus region. Armenia which looked at Russia when Azerbaijan attacked its honour and pride has felt neglected. Therefore, Armenia is now slipping away from Russia’s centre of influence.

And losing Armenia will be the biggest mistake Russian President Vladimir Putin can make.

On January 10th, Nikol Pashinyan, the prime minister of Armenia, declared that his country would not be hosting Russian-led military drills this year, directly contradicting a statement made by Moscow a week earlier. At the same time, Pashinyan launched a remarkable attack on the Russian military presence in Armenia, claiming that it was more of a “threat” than a defence for his nation.

The Collective Security Treaty Organization (CSTO), a Russian-led alliance declared on January 1 that the 2023 edition of its yearly flagship exercises, Unbreakable Brotherhood, would take place in Armenia.

This wasn’t the first disagreement between Russia and Armenia. The joint CSTO declaration did not contain a “clear political assessment” denouncing Azerbaijan’s incursions into Armenian territory in May, November, and September of this year, thus Nikol Pashinyan, the prime minister of Armenia, declined to sign it.

The population of Armenia is also turning its back on Russia. Recent polls indicate that the majority of Armenians do not believe their future lies in a partnership with Russia. When asked if they thought the former Soviet republic should leave the CSTO, 27.1% stated “definitely yes,” 16.2% said “rather yes,” 19.6% said “absolutely not,” and 19.7% said, “rather not.”

Further, in November, hundreds of Armenians protested Putin’s visit to their nation in two different rallies in Yerevan before the summit because they disapproved of his visit. More importantly, some opposition figures in Armenia have been openly accusing Russia of betraying the three million-person Caucasus republic.

Read More: Why the West’s appeasement of Armenia will fail and end up antagonizing Turkey and Azerbaijan

Clearly, the Armenian PM’s Pashniyan statement is a reality check for Russia.  Additionally, Armenia’s leadership had requested that French President Emmanuel Macron presides over peace talks with Baku in an effort to reduce Yerevan’s reliance on the Kremlin politically and strengthen Yerevan’s positions ahead of negotiations with Azerbaijan. This action suggests that Yerevan no longer views Moscow as the sole arbiter in the South Caucasus.

Also, the US is exploiting the trust issues of Armenia regarding Russia. According to the U.S. State Department, Armenian Prime Minister Nikol Pashinyan and U.S. Secretary of State Antony Blinken spoke on the phone on January 18 and discussed how to resume bilateral negotiations with Azerbaijan.

Armenia was wounded by the conflict with its neighbour in 2020, when Baku, which has Turkish support, seized territory from Yerevan and vehemently asserted its claim to Nagorno-Karabakh.

Turkey and Azerbaijan have been cultural allies spanning the Ottoman Empire. These were the very groups that wanted to dechristianize the region and that is exactly what was behind Ottoman Empire’s motive to initiate the Armenian genocide.

Lately, the Lachin Corridor, the only route linking Nagorno-Karabakh/Artsakh to Armenia, was blocked on December 12 by “Azerbaijani activists” supported by the Ilham Aliyev regime of Azerbaijan.

The transportation of supplies for the 120,000 Armenians who live in Nagorno-Karabakh/Artsakh depends on this road. No supplies of food, medicine, or gasoline have reached Artsakh in more than a month.

In order to starve and freeze the Armenian population of the region to death, Azerbaijan has been maintaining a siege on the Armenians of Artsakh while breaking international law.

Local Armenians in Artsakh say, “We feel that a genocide is unfolding in front of us once more, just as it did in 1915.”

Through the blockade, Azerbaijan has shown its goal to win back Nagorno-Karabakh by hook or crook. It regularly violates the ceasefire. Russia needs to step in and stop being a passive negotiator in the whole conflict.

Putin only needs to call Aliyev and demand that he stop the illegal blockade. As soon as Azerbaijan removes its embargo, Russia must assist Artsakh by organising an airlift to the airport at Stepanakert and securing emergency relief supplies in Armenia for prompt delivery.

European Union, and the United States, are actively exploiting and trying to gain from Russia’s ambiguous stance on Armenia. The statement by Armenia’s leader shows that Yerevan can dissolve its nominal alliance with Moscow and entirely alter its geopolitical trajectory over time.

Putin needs to act now. Otherwise, Armenia would slip away.