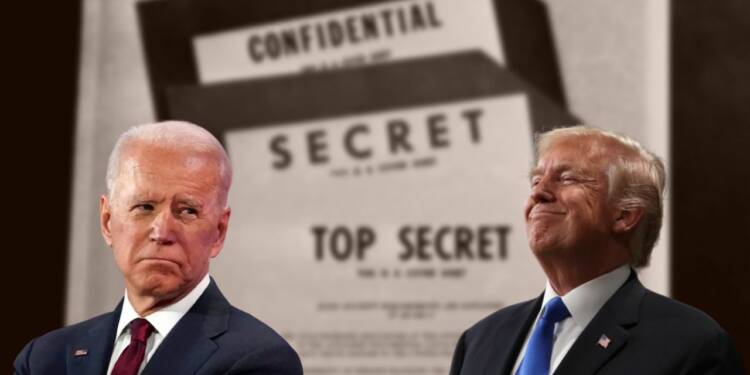 Donald Trump was attacked from all quarters in the wake of the FBI’s raid at his Florida residence last year. The discovery of classified documents from the time when Trump was President further escalated the propaganda against the Republican leader.

However, now the tables have turned. As the very person who dispatched the FBI to intimidate the former US president is now facing the same situation. Whether Joe Biden will be prosecuted or not, is not certain. But one thing is crystal clear, this is an unprecedented blow to his political career.

Last year, the FBI raided the Donald Trump’s residence at the Mar-a-Lago club in Florida. The media reported that the search uncovered several classified documents which Trump brought with him after he left the White House. The agenda driven media organizations in the US, including CNN, which are prejudiced against the Republican Party, stated that by citing “multiple sources”, the FBI’s investigation is part of a wider strategy to malign Trump.

The media and Democratic Party blatantly circulated the misinformation that Trump was in deep legal trouble. While the Justice Department claimed that keeping classified documents at Mar-a-Lago is a violation of certain laws such as the Epsionage Act, many legal experts and scholars even claimed that the US Department of State must be building a criminal case against Trump.

However, the same media and the Democrats are now silent following the uncovering of classified documents from residence of Joe Biden.

During a 13 hour search of Biden’s Delaware home, the Department of Justice officials discovered many classified and classified documents . Some documents even date back to the time when he served as a senator and later as vice president under the Obama administration.

The most shocking aspect of Biden’s case is that in addition to his home, classified documents were also retrieved from the Penn Biden Center; which is a think-tank he established in Washington DC. While a second set of secret records were recovered from his garage, another batch was found in the storage space.

It must be noted that unlike Trump, Biden willingly provided access to the DoJ officials to carry out the search. This was not a raid.

Difference in both leaders’ cases and what happens next

From a rational perspective, the media should have cornered both the Biden and Trump. However, only the latter was vilified. As to the former, the American media very conveniently abandoned the obligations which are generally expected from the fourth pillar of democracy.

Biden knew that sooner or later, the Department of Justice is going to retrieve the classified documents from his premises. Therefore, he concocted a cunning strategy. Biden asked the DoJ official to conduct a search of his properties in order to portray that he respects the rule of law and hide his guilt.

The US president knows that a majority of news outlets in the country such as ABC News, CNN and MSNBC exhibit a high level of partiality for Biden regime, so even if the discovery of classified documents from his premises makes news, they will help in doing damage control.

Unfortunately, for now Biden will not be charged and prosecuted as the entire administration is under his authority. However, there is hope that if the Republican Party wins the upcoming presidential elections of 2024, which seems likely given this development, then justice may get served. Although, nothing is official as of now.

It is yet to be seen how the current events unfold for Biden in the near future. But one thing is for certain, the discovery of classified documents, will surely hit Democrats in the upcoming elections.