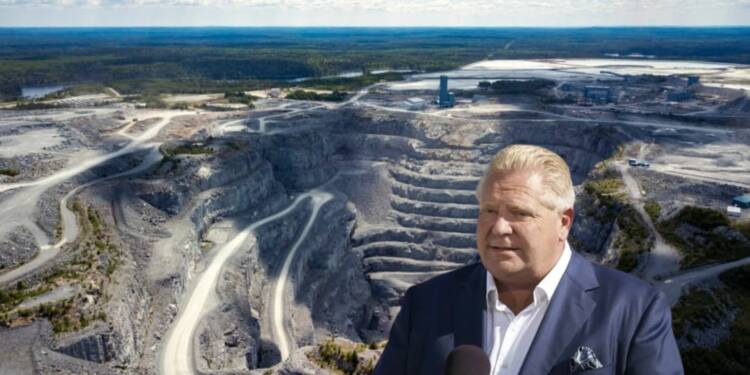 The province of Ontario has an unprecedented potential. Luckily the premier of Ontario has realised it. Ontario is home to the Ring of Fire rich in metals like cobalt, nickel, chromite and copper. The critical minerals found in the region are the future cornerstones of the province’s economy only until a sane mind recognises their true potential.

The premiers of the provinces in Canada have now come to this realisation that PM Justin Trudeau is taking the Canadian economy to infinite doom. This lays the responsibility upon them to free their provinces from the feds and work toward benefitting their provinces. Prairies in the country have already detached themselves from the federal liberal government and now other provinces seem to follow suit.

Ontario has the minerals the whole world wants. But the premier of Ontario has a condition. “You can have our lithium, as long as you’re manufacturing the batteries here,” is what the premier claims.

“Everyone’s here wanting to get the minerals,” Doug Ford said. “I have one condition. I’m sure each and every one of you agree we should never ever ship our critical minerals, no matter if it’s a lithium or cobalt or graphite or nickel, over to other countries so they can produce batteries in their country, and ship [batteries] over to Ontario. It doesn’t work that way.”

Doug Ford stated that businesses would be obliged to also produce batteries in Ontario as part of the provincial critical mineral plan.

“You can have our lithium, as long as you’re manufacturing the batteries here,” he said. “We’re going to build the cars of the future right here in Ontario.”

The Ring of Fire, a significant mineral deposit in Ontario, is situated in the James Bay lowlands, roughly 500 kilometres north of Thunder Bay. For construction of EV components, it contains chromite, cobalt, nickel, copper, and platinum.

The Ontario key minerals plan was introduced by Doug Ford last year, and he referred to it on Monday as a five-year blueprint to better connect the industries, resources, and workers in the province’s north to the manufacturers in the south.

He even pledged a $5 billion electric vehicle battery plant in Windsor, Ontario, and Stellantis and LG have committed to building a $1 billion access road to the Ring of Fire region.

The conversion of Honda’s plant in Alliston, Ontario to the production of hybrid automobiles has also been announced. The project is estimated to take six years to complete and to cost $1.4 billion; $131 million will be contributed by both the provincial and federal governments.

Doug Ford’s plan is going to cater to the province’s demands. Moreover, it will generate employment in factories and manufacturing companies. Unlike the country’s PM who is exacerbating the worries of Canadians by taking steps in order to hurt employment just to feed his political appetite, premiers of provinces are now taking the baton.

Recently, the PM introduced a plan to fund innovative businesses in Alberta which is bound to hurt the employment in traditional businesses of oil and mining industries. It’s high time now. The provinces are detaching their strings and won’t follow the diktats of the federal government anymore.

The prairies are the granaries of the world and oil and gas hub of Canada but the government in Canada have always tried to hurt both the sectors of these provinces. Similarly, the province of Ontario is rich in minerals but is getting its resources exploited at the hands of foreign companies. The steps of securing the interests of Canada that the leader of the country must be taking are now being undertaken by the provinces.

Foreign companies have been exploiting the resources of Ontario for this long but the government has been ignorant. Anyway, Doug Ford now comes as a ray of hope.