ITAXIT after BREXIT? Why Italy might leave the European Union? 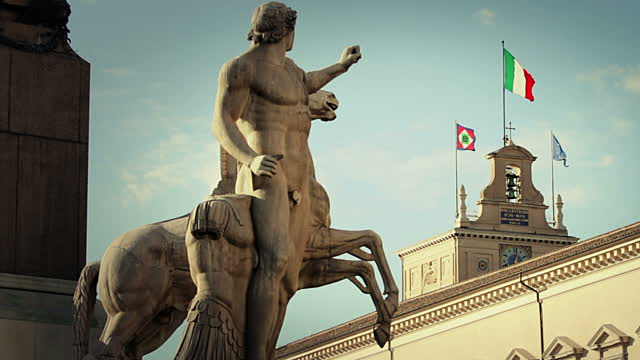 In the aftermath of Brexit and Trump’s victory, the future of the European Union looks increasingly shaky each day. With popular anger rising among Europeans owing to continuing economic slowdown and the refugee crisis, it is very likely that we might soon see the sceptre of the Union itself falling to pieces within this year.

The country that would benefit the most from such a collapse is Italy, the long-suffering ‘junior’ partner of Western European States.

Italy has traditionally not been a ‘great’ European power; its strength and independence only being what they are because of the support of fellow European Powers. As of now, Italian exports are uncompetitive in the global market owing to high manufacturing and labour costs. The Italian economy suffers from a high Current Account Deficit which brings about a need for near-constant foreign capital inflow in order to pay debts. This is in addition to the expected increases that Italy would entail for Defence costs once Donald Trump’s plan to ‘make Europe pay its share’ for NATO military expenditure reaches fruition.

When one looks at the Italian scenario objectively, this is not surprising.

A common refrain supporters of liberal parties often point to these days is the sceptre of the falling value of the Rupee in comparison to the Dollar. Such statements only betray a gross ignorance of how World currencies work. The falling value of a currency essentially makes the country’s goods cheaper for the World market. This increases demand for the Country’s goods- and thus jobs, infrastructure, production etc get a boost. By juggling the value of the Currency- called the ‘Monetary Policy’ and the Rates of Interest laid down by banks- called the ‘Fiscal Policy’, a Country maintains control of its Economy.

This is stymied in case of the European Union.

Since countries cannot control the value of the Currency, they are left at the mercy of the major economic powers in the Union- in this case, Germany. In exchange for easier loans, they surrender their decision-making ability to the Germans. Since the wealthy Germans back Italian loans, there is a tendency among Italians to inflate the value of the Italian Lira in respect to the Euro- so that they would enjoy a high standard of living both inside the Country as well as outside.

This is, quite literally, ‘Easy money’.

The problem with ‘Easy money’ is simple. When Italians signed away their freedoms, they also signed away political control. Money is Politics- and increasingly the Italians have been paying dearly for Merkel’s pro-Islamist policies. ‘Easy Money’ and lack of State control on economic policy has also devastated the Italian economy. In 2016, Italy’s GDP growth barely 1%. The Debt to GDP ratio is an extremely high 132 per cent- and readers should remember that Italian manufacturing is hardly a match for India, let alone China. Overall unemployment is 12 per cent, while unemployment among youth is 36 per cent. ‘Easy money’- based on artificially inflated currencies and easy loans- have led to a scenario where Italians look down on the dignity of labour and refuse to take ‘poor’ and ‘degrading’ jobs such as agriculture and plumbing. Farm subsidies, rampant welfare, and other unnecessary expenditures have played havoc with the Italian budget requiring more and more loans- which only lead to yet more loans.

It is no wonder that according to Mr Clemens Fuest, head of Germany’s IFO economic institute, Italian Standard of Living hasn’t risen since 2000. Even the IMF admits that Italy’s economy is not expected to get back to pre-Lehman crisis level of 2008 until 2025.

Contrast this with the fact that India’s per capita income has crossed INR 1 lakh this year. In fact- if the current pace of growth continues along similar infrastructure development until at least 2030, India’s economy might equal that of modern-day Japan’s.

In addition to their economic woes, Italians also face the grim sceptre of what can, very accurately, be only described as a ‘refugee invasion’. As of October 2016, more than 150000 refugees had arrived from Pakistan, Afghanistan, and North Africa. Entire communities- especially in the islands of Sardinia and Corsica- have been swamped with vast numbers of refugees purportedly feeling the war in Syria- even though there are few real Syrians in the number. While Italy has so far remained safe from the terrorist attacks plaguing Europe in these days- primarily owing to a robust security apparatus that deports Muslims at the first sign of Radicalization, it is only a matter of time before an Islamist attack does happen. As such, support for right-wing parties in Italy has been long expected. In case of Italy, the perfect example of this has been rising support for the Five Star Movement, headed by Beppe Grillo- an influential media personality. With the liberal former Prime Minister Matteo Renzi resigning last month after a failed referendum regarding relations between Italy and the EU, it looks more likely than ever that Italy would say goodbye to the Union, the same way the British did.

Will Italy be harmed by such an action? It’s possible- but looking less likely every day.

Merely escaping from the sceptre of Islamic terrorists running amok within the country- the way they have done in France and Germany- would be gift enough. Further, the knowledge that the doom-and-gloom predictions over Brexit are being proved false would also embolden ITAXIT enthusiasts. But the trouble isn’t political, but economic. Italian banks have over 360 billion euros in non-performing loans; if they leave the European Union, not only would they have to devalue their Currency but they would have no more recourse to cheap loans backed by German money. If Italians continue to disrespect the value of labour- the way they have been led to do so in a Subsidy-file economy, it might spell disaster for the Country. In addition, economic turmoil- especially when the Chinese economy is looking shaky and at the end of the traditional eight-year business cycle, marked at one end by the 2008 recession- would lead to decreased investor confidence as well as fall in value of Italian bonds. A manufacturing Nation like India or China or Russia could take the hit, not Italy.

While an ITAXIT would benefit Italians, it will not leave them without a few scars.

The Italian experience is especially important to Indians. Increasingly, we have been led to treasure the idea of ‘easy money’. The vast majority of young urban entrepreneurs do not make Start-ups to grow as individuals or to give back to Society, but to get it offloaded to the nearest MNC for a profit at first chance. We demand Subsidy after Subsidy and denounce the idea of private enterprise. Lakhs of Indians eschew hard work and good governance for free alcohol and a few notes. In one sentence- the very idea of Fiscal discipline is lacking.

Not only that- India is on the cusp of a refugee crisis of its own. Rohingyas are flooding into the Country from Myanmar where what began as a botched Islamist-takeover of the Arakan has been turned into a Buddhist strike-back. In addition, the Chinese have been cracking down upon the Uighur Islamists in its Xinjiang province after unverified reports- though readers must remember that all reports from China are unverified- of Islamist scheming and conspiracy. And all this while- not a word has been spoken by the great Liberal and Secular personalities all across the Muslim World and India. On the other hand, Hindus are persecuted openly in Bengal- and these august Liberals are only too eager to deny such atrocities.

But while we might dismiss West Bengal as a lost cause- given the apathy of the Bengali bhadralok, drowned in their Rabindra Sangeet and Marxist wet dreams, we can’t ignore the danger of refugee ghettoes spouting in India, the way they have in Italy and other European States.

Already, there are reports of Uighurs and Rohingyas settling in Kashmir and Western UP. Mark this- Kashmir, where Hindus are persona-non-grata, is seeing Rohingya-Kashmiri marriages and settlement. Where Indians can’t buy an inch of land and Pandits have been slaughtered and driven out like dogs, Rohingyas without identification and possible links to the many Islamists terrorist groups in Myanmar and Bangladesh can settle and buy land in peace. Uighurs- any of whom are known to have served in the unending Shia-Sunni wars in the Middle East- are flooding into India, and being mollycoddled by Liberals and Human Rights workers. All this while Kairana and other regions of Western UP are falling to ruin with Hindus escaping from them in fear of their very lives. If BJP loses in UP, it is likely that the process will only quicken.

No amount of good governance and economic development can change the fact that Liberal love for ‘Easy money’ and ‘Subsidies’ and the sceptre of refugee ghettoes popping up like boils across North and East India would put us on the same path that the European Union is on.

Is India prepared for this?

Will 2017 bring a change in the world’s attitude towards Islamic Terrorism?