Whenever Chinese Media brings up 1962, Ask them about Doklam! 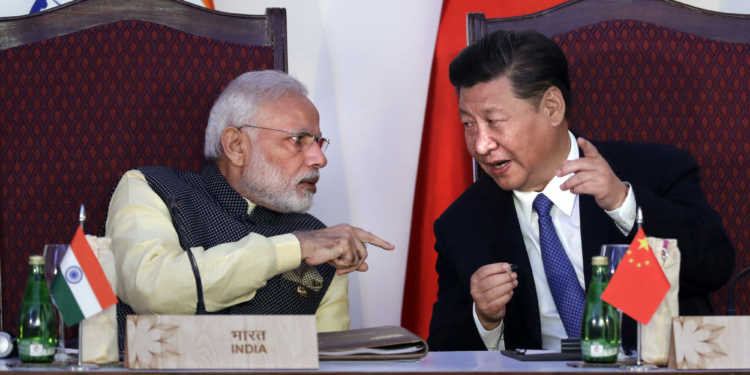 As the dust settled on the infamous Doklam standoff between India and China which saw a military standoff between the countries at Doklam for 70 days. While not many entertained the notion of a full-scale military conflict between two of the world’s most populous nations, the state-run Chinese media had immersed itself into rampant warmongering in an attempt to bully India into submission drawing parallels to the 1962 war and the subsequent humiliation that India faced. Perhaps the Chinese media forgot one important detail. Narendra Modi is no Jawaharlal Nehru or Manmohan Singh that he would submit to empty threats and warmongering and PM Modi made sure that he gave the Chinese a taste of their own medicine with some deft diplomacy.

The Doklam standoff started when the Indian Army spotted road construction by China on the disputed land in a bid to cut India off its northeast region and provide a geographical edge over India in case of a conflict. The standoff created tremendous pressure on both the heads of the countries and the need to avoid a full-scale military conflict. Back home, Modi couldn’t afford a war on the backdrop of demonetization and the introduction of GST, a conflict of any scale would have been the death knell for the Indian economy which is expected to grow over 8% in the coming quarters. On the other side of the border, Xi Jinping, already presiding over a slowing economy couldn’t afford any more blots in his resume in the light of the then upcoming 19th National Congress of the Communist Party of China where he would be re-elected for a second term with the chance of an unprecedented third term. But both leaders in their respective countries have an image of being fearless and ruthless. Thus none of them could afford to blink first and withdraw the troops. Thus leading to a standoff.

But PM Modi had the perfect ploy to beat China in its own game. The timing of the crisis being resolved is particularly interesting.The BRICS summit consisting of Brazil, Russia, India, China and South Africa was to be held in the coastal city of Xiamen, China in the month of September. Last year the summit was held in Goa and was deemed as highly successful. BRICS perhaps after the G-20 Summit is the only multilateral engagement which has brought some considerable change on the ground.The New Development Bank (NDB) of BRICS, headed by an Indian and headquartered in China, has been making rapid strides. It issued its first tranche of loans for seven projects worth $1.5 billion with a focus on solar, wind and hydroelectric power generation. The second cluster of projects amounting to $1.4 billion has just been approved by the NDB in areas such as flood control and rural water management.
( https://economictimes.indiatimes.com/…/article…/60342569.cms)

More importantly, BRICS also acts as a gateway for China’s ambitions to become the global leader. China’s membership in BRICS has concretely promoted its interests in multiple ways. The BRICS push to reform international financial institutions has led to greater accommodation of China in the International Monetary Fund, for example. BRICS, if not for India who has close relations with the USA and its preference for status quo would be nothing but an anti-Western coalition let by Russian muscle and Chinese muscle. The inclusion of India in the summit allows the western countries to breathe easy amid fears that China might use the summit to establish an ill-liberal world order. The inclusion of India would keep China’s powers in check.

As the standoff raged on precariously close to the summit, questions started arising whether PM Modi would visit China and meet Xi Jinping at a time when both the country’s troops are locked in an intense staring contest with the threat of war breaking out anytime. The Indian government was aware of this situation and played its cards perfectly. With the threat of a boycott looming large, China started getting jittery. If PM Modi had indeed boycotted the event, it would have meant the end of BRICS and that too at a time when China was urging to expand the BRICS and induct countries like Mexico under the ambit of BRICS Plus and try to integrate it with China’s ambitious Belt and Road initiative. India’s boycott would have killed the proposal instantly.This subsequently would have led to incessant ridicule of the Chinese President and a terrible press at a time he is trying to position himself as the darling of globalization. Add to that, the all-important congress of the Communist Party scheduled just after the summit had left Xi Jinping (
with no place to hide.
(http://www.livemint.com/…/Indias-clever-use-of-the-BRICS-ca…)

The result? The standoff was resolved just one week before BRICS and Narendra Modi agreed to participate. In what can be equated with China being brought down on its knees, the BRICS declaration named Lashkar-e-Taiba and Jaish-e-Mohammad along with the East Turkestan Islamic Movement and the Islamic Movement of Uzbekistan. The agreement was not merely an acknowledgment that BRICS member states face common threats in the form of terrorism, but also a tribute to India’s consistently strong stand on this issue. The BRICS summit 2016 held in Goa, India had similarly put forward its request to name LeT and JeM in the declaration but China being the perfect ally to Pakistan steadfastly refused and instead praised Pakistan for the(imaginary) sacrifices it has made for fighting against terrorism.It is often said that revenge is a dish best served cold and Modi did serve the dish to Xi Jinping in his own backyard. Pakistan was understandably irked by the declaration implicating its son of the soil and part-time terrorist ,part-time politician, full-time coward Hafiz Saeed, on whom the country invests a lot of resources to keep him safe and abate his anti-India activities.
( https://scroll.in/…/brics-compelled-chinaandindia-to-end-…)

Narendra Modi made a mockery of China and its media, who warned him not to bring up bilateral terrorism issues at the BRICS summit but PM Modi ensured that the declaration named Pakistan based terror outfits for the first time ever thus rendering Pakistan defenceless against the global pressure on terror as its closest ally China was a part of the declaration and has often used China as shield to cover itself from the pressure to crack down on terror. Talk about acquiring two targets with one bow.

So what made China consider India’s boycott threat seriously? Credibility. China had a front row seat when the SAARC summit collapsed when India refused to participate in the annual summit last year in Islamabad. China’s ambitious One Belt One Road initiative was met with stern resistance from New Delhi as it threatened India’s sovereignty. USA too had raised objections about the project and was unwilling to get on board. Many countries were averse to China’s project. But India was the only major country to not participate in the mega forum. A sulking USA too had sent its representatives but India stood firm on its stand and thus managed to take the sheen away from the mega forum.

China thought that by the end of Doklam standoff, it would be able to re-assert its authority in the region and ultimately become more powerful. But it didn’t expect India’s swift and stern response. India successfully tamed the bully in its own backyard. India has exposed chinks in the armor of China who prior to the standoff was considered invincible. China’s power in the region is already being undermined in the backdrop of Nepal scrapping a $2.5 billion Hydro Power plant project with a Chinese company.

India just showed the world the blueprint of taming China. China too on its part learned an important lesson. You just don’t mess with India.

Now whenever, the Chinese media would try to humiliate India by bringing up 1962, feel free to ask about 2017. The chances are bleak that its media would now mention 1962 ever again.

Will Trump be Re-elected in 2020? Americans have answered this question