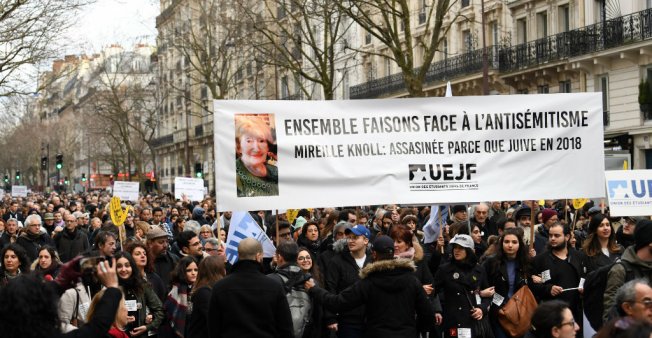 In what is suggestive of a rise in extremist Islam in France, a French manifesto has become the victim of brazen refusal to delete texts relating to anti-Semitism. The manifesto signed by the former president Nicolas Sarkozy and former prime minister Manuel Valls among others, has demanded that the violent excerpts of the Quran which openly advocate killing of Jews, Christians and non-believers, be deleted. An open letter in the French media has also brought to light an ‘Islamic radicalisation’ for a ‘quiet ethnic purging’ in the Paris region, with abuse forcing Jewish families to move out.

The manifesto has been signed by a total of 300 politicians and intellectuals, due to a rise in anti-Semitic crimes in France. The sharp rise in crimes against Jews is, what many believe, a consequence of increase in fundamentalist Islam in France. One of such incidents which had shocked the European nation was the murder of Mireille Knoll, an octogenarian Holocaust survivor who was stabbed to death in her apartment. Authorities had pointed out that it was an anti-Semitic crime. A year ago, Islamic extremism and hatred against Jews had claimed another innocent life. Sarah Halimi, a 67 year old woman, was attacked and beaten badly in her apartment and then thrown out of the window. Her attacker yelled “Allahu Akbar” after murdering her in an open manifestation of how Islamic fundamentalism can lead to a Jew death.

France is home to the largest Jew community in Europe. Since the early 2000s, however, French Jews have witnessed a rise in anti-Semitism. Though last year saw a reduction in the total number of crimes, the crimes that were committed were a lot more violent and inhumane in nature. The manifesto has exposed the government and media’s casual attitude in this matter. It has pointed out how this unrecognised “Muslim anti-Semitism” has forced French Jews  to migrate from their homes, change neighbourhoods and leave suburbs. In some cases, Jews have been forced to even take their children out from public schools.

In an ideal world, the clerics should have come out accepting this welcome move. However, they have tried to put the entire blame on the signatories of the manifesto. After the release of the manifesto, 30 imams have signed a counter letter showing that they are not going to exterminate extremism within Islam. In fact, Tareq Oubrou, prominent French imam has called the manifesto “blasphemous”. Similarly, the Observatory for Islamophobia, an organisation affiliated to the Egyptian government has instead of accepting the fault lines, attacked the manifesto, labelling it as “hateful racism”.

It is time that we get over the narrative that a believer cannot commit a crime after referring to sacred texts of a religion. If the text is offensive or abetting in nature, it can definitely lead to rise in communal hatred. Crime against French Jews are only an example of what such provocative texts can lead to. If the religious texts of a particular religion promote killing those belonging to another religion, there should be no hesitation in pinpointing them. One cannot allow racism, fundamentalism, violence and communalism to be nurtured in the garb of religious freedom. Its time a line is drawn between what amounts to religious freedom and what amounts to religious violence. This manifesto will go a long way in bridging this gap.