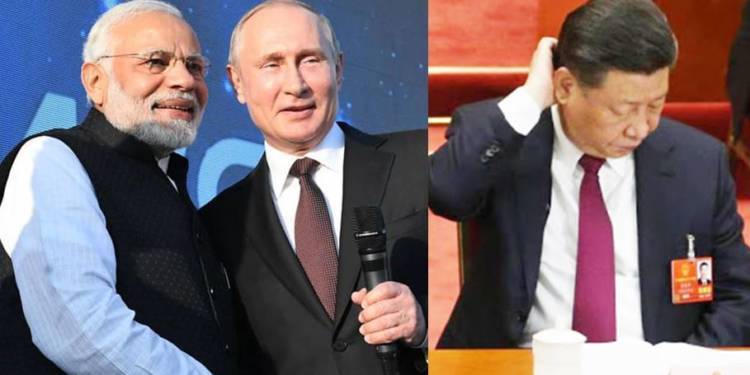 China is suddenly turning pacifist in the face of deepening Indo-Russian ties. After a long round of threats, undiplomatic remarks and bullish behaviour, China is holding out an olive branch in the run-up to a likely Russia-India-China (RIC) Defence Ministers meeting at Moscow in September.

The Chinese Foreign Ministry spokesperson, Zhao Lijian, has stated that maintaining peace along the Sino-India border and deepening strategic trust with India is one of Beijing’s diplomatic priorities. Lijian also said that China would try to deepen mutual trust and expand “shared interests” with its neighbours and the developing world. He made these remarks while replying to a question put by the Chinese State media outlet, Xinhua news agency.

Not just border tranquility, but China is also speaking about forging deep diplomatic ties with India. When asked about China’s future diplomatic priorities in the fast-changing international landscape, the Chinese Foreign Ministry spokesperson underscored Beijing’s plans to boost bilateral relations with the US, Russia, the European Union (EU), Japan and India.

Zhao also said, “For the China-India relationship, the two sides should jointly safeguard peace and security in the border areas and maintain steady and sound development of bilateral ties.” The top Chinese Foreign Ministry official, however, refrained from making any remarks about the ongoing military standoff at the Line of Actual Control (LAC) in Eastern Ladakh.

China is being extraordinarily cautious here. It is avoiding any reference to Eastern Ladakh to ensure that it doesn’t end up creating a major controversy which could end up in a diplomatic battle of sorts. This sense of Chinese goodwill is, of course, eyewash. The fact remains that nothing has changed on the ground and the de-escalation process in Eastern Ladakh hasn’t worked out.

The sudden shift in China’s approach towards India ought to be seen in the light of likely RIC meetings soon. Russia wants to host a meeting of the RIC Defence Ministers in Moscow next month. Moreover, according to The Print, Russia has also proposed a RIC meeting at the sidelines of the G-20 Summit at Riyadh, Saudi Arabia in November.

Russia is taking a deep interest in the soaring Sino-India military tensions, but it is not playing mediator, but, is strengthening India’s hand against China. Russia considers India its true friend which overrides the strategic “axis of convenience” that it shares with China.

As such, Putin understands how China is trying to eat into the Russian sphere of influence in Central Asia and the entire Eurasian region. The Russian President wants Prime Minister Modi to help in containing the growing Chinese influence in the former Soviet Republics.

PM Modi has also not disappointed Putin. According to ET, India favours Russia when it comes to greater Eurasian stability amidst growing Chinese presence in Central Asia. India is also in talks for a Free Trade Agreement (FTA) with the Moscow-led-Eurasian Economic Union.

The thing about goodwill in international relations is that it never goes wasted. India has earned Russia’s goodwill. And today, Moscow considers India an even bigger ally than what it already was. When China, India and Russia sit together on the diplomatic table, Moscow would tilt towards India as a quid pro quo for New Delhi’s help in Eurasia. Moreover, Russia has a lot more to achieve out of India including to convince the US and the rest of the Western world to ease sanctions on Russia.

China, on the other hand, has read the ominous signals and knows that when it sits at the diplomatic table with Russia and India, it will be facing two friends desperate to corner and marginalise Beijing. Thus, China knows that it is shaping up for a major diplomatic assault at the hands of India and Russia. The Chinese Foreign Ministry is, therefore, doing its best not to irk New Delhi or Moscow in the run-up to some tough RIC meetings.

Bigger than Huawei or TikTok ban, Trump’s ban on WeChat could start a whole anti-CCP revolution in China

‘Don’t shoot at the Americans no matter what,’ China instructs its plump soldiers after Galwan thrashing