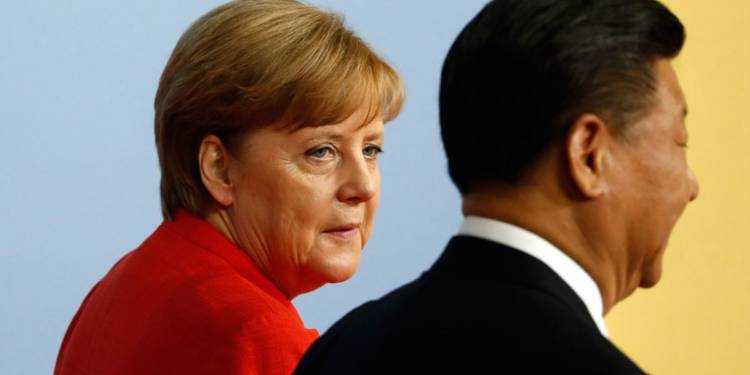 Angela Merkel, who until now was being seen as a pro-China EU Chairperson, has to the surprise of many, taken a rather boldly aggressive stand against Chinese excesses within the mainland and has directed her disgust regarding China’s treatment of ethnic minorities directly to the CCP General Secretary Xi Jinping during the EU-China virtual summit on Monday. The German Chancellor was China’s only hope from the European Union, which has individual countries increasingly standing up to the middle kingdom, but the inter-governmental bloc of whose, under the leadership of German Chancellor Angela Merkel, was taking a peculiarly pro-China stance.

Asked if China would take any notice of the EU’s human-rights concerns, Angela Merkel said: “We will see what comes out of it” and that Xi had offered to the EU the option of its ambassadors visiting Xinjiang province and that there would be an ongoing human-rights dialogue.“That does not mean that there was agreement about these issues,” she added. Issues of Hong Kong’s National Security Law, misbehaviour of Chinese state-owned companies, repression of ethnic minorities in China, among others were taken up with Xi Jinping. Interestingly, Merkel was a participant of Jinping’s inquisition and did not try to coverup on his behalf.

This shows a tectonic shift from the German Chancellor’s China policy from only weeks ago. Xi Jinping had been relying on Merkel to ensure that a trade deal with China and the EU is achieved before the end of this year. However, the EU representatives are said to have conveyed to the Chinese Premier in no uncertain terms that a trade deal will only be reached if the red-rogue country ceded to all of EU’s demands, including those of an investment treaty granting European players a level playing field in mainland China, respect for intellectual property, ending of obligations to transfer technology and a significant reduction in subsidies for Chinese public enterprises in Europe.

As a matter of fact, effectuating a trade deal between EU and China was a legacy issue for Merkel, who was looking at the fulfilment of the same for her to be remembered as an EU Chairperson who brought the EU closer to China while distancing the bloc from the United States. For the same, Merkel sacrificed a lot and earned the ire of many European countries too. However, with time, the outgoing German Chancellor seems to have realised that her goals of turning EU into a pro-China bloc are not feasible and that as soon as her term of EU Chairperson ends in January next year, China will be dumped in the bin by the Union.

As such, the German Chancellor does not want to be seen on the wrong side of history and is undoing all her efforts to bring the two powers closer than ever before. She is now working towards ensuring that her name goes down in the annals of history as one which stood up to China, and as a brave German who went down fighting the Chinese devious plans. Merkel’s tenure as the EU Chair comes to an end in January next year, and her term as the German Chancellor too is set to be over in 2021. With no legroom remaining for her to impose around the EU member states, and realising that it is just Germany under her leadership, which wants to have anything to do with the red-rogue state, Merkel is now tectonically shifting her stance.

Even if the Chancellor would have continued on her path of desperately working to make the European Union an ‘ally’ of China’s, the same would have turned out to be a futile endeavour. The German Chancellor’s term expires next year, and all of the prospective successors to the top post in Germany are declared China hawks, with none of them having a pro-China tilt. Merkel has three potential successors from within her party, Christian Democratic Union (CDU) – Norbert Röttgen, Armin Laschet and Friedrich Merz. And except Laschet, the potential successors aren’t very fond of Merkel’s soft China policy that eschews all conflicts and threats in favour of a few German business interests.

Even from within her coalition government, the Chancellor’s colleague – Foreign Minister Heiko Maas is in no way fond of China and had even gone as far as publicly rebuking the Chinese Foreign Minister Wang Yi during a press conference with him recently. The German Foreign Ministry, under Maas, has even released an India-centric and anti-China ‘Indo-Pacific Strategy’.

Having been rendered helpless, Merkel is now expected to stall the trade deal with China until it finally walks out of the negotiations for the same. Putting up huge demands before China is also being seen as a tactic being employed by her to make any sort of deal between the two sides impossible. The biggest indicator of her changed stance, however, remains the intense grilling of Xi Jinping during the virtual “video-call” on Monday. Evidently, Jinping has lost a loyal friend in Angela Merkel.