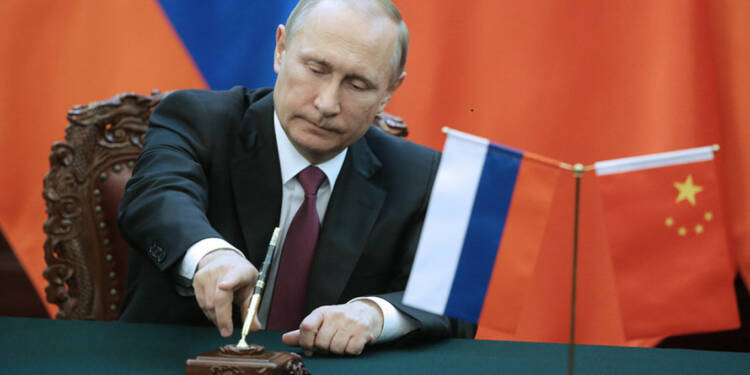 China’s hopes for striking a deeper military partnership with Russia looks to have been left in the doldrums. In the face of a militarized Quad, China was hoping to build its own military alliance to balance the tilted power struggle in the Indo-pacific region, but it seems that Putin does not trust Chinese ambitions.

Putin’s claims come at a time when China feels threatened in its own backyard with the rapid development and consolidation of a militarized Quad. Australia’s inclusion into the Malabar exercise has strengthened quad in the region and at the same time rattled Chinese policymakers.  China is in an immediate need of a strong military alliance to counter the QUAD, but Russia’s refusal to forge a military alliance is devastating for Chinese ambitions.

Vladimir Putin has reiterated his claim that Russia is not looking forward to a military alliance with its “strategic partner” China. Putin’s reiteration of his claims from back in 2019 is another signal that all is not well with the strategic partnership and going forward it’d want to maintain the status quo and not upset the current world order.

Putin rejected any talk about the possibility of an alliance and said that they don’t need it. On being asked about the growing co-operation between the two states he stated, “Without any doubt, our cooperation with China is bolstering the defence capability of China’s army”.

Putin’s claims come at a time when the paper dragon is feeling threatened in its own backyard with the rapid development and consolidation of QUAD. China is in an immediate need of a strong military alliance to counter QUAD but Russia’s refusal to forge a military alliance is devastating for Chinese ambitions.

Analysts of the current relationship between Moscow and Beijing have described it as a marriage of convenience and have also stated that it is unlikely they would fight one another’s battles.

China faces imminent possible military confrontation on four fronts in Taiwan, The Himalayas, the South China Sea and the East China sea. Moreover, roadblocks at every possible BRI destination from Europe to Africa and Central Asia have cornered the paper dragon. A strong robust military alliance beyond the structural confines of a strategic partnership is needed to rebalance the growing parity in power in the region, but Russia’s NO has China in waddling the troubled waters on its own.

The latest snub has so far been in line with Russia’s recent approach in regards to Chinese ambitions.

Putin’s latest statements have made it more obvious that Russia does not look favourably to Chinese interference in Central Asia. Moreover, Russian’s existing conflicts with China far outweigh the transactional relationship that the two states share. Territorial conflicts, including the issue of Vladivostok and even a possible confrontation in Alaska, just deepen the problems in regards to any military alliance between the two states.

Russia’s fragile economy amid sanctions from the West has certainly pushed it towards China. Though, Russia’s unwillingness to step up the relationship is a clear indication of its unfavourable view of the relationship in the long run.

Putin understands that a Russian alliance, although fruitful to achieve short term goals, would jeopardize Russian ambitions in the long run. A military alliance with china will be hugely outweighed by costs of another arms race with the United States that the Russian economy cannot sustain. In addition, freedom of manoeuvrability, economic and financial will be heavily restricted with more sanctions from the United States and its allies.

In 70 years of diplomatic relations, Russia and China share a long history of mutual suspicion that has incubated since the US-China rapprochement in the cold war after the Sino-Soviet split. China’s actions in the cold war swung the tide in the US’s favour and effectively ended the cold war much before the Soviet downfall in 1989.

At the time China took full advantage of the Russian downfall and used the situation to further its economic ambitions at Russia’s cost. In 2014, Russia signed various economic deals with China to keep its economy afloat. The deals incurred heavy losses to the Russian economy in general but were needed to sustain pressure from the west and the US sanctions.

Therefore, Russia’s current stand to not help its “strategic partner” is warranted. Putin wants to put Russia back to being a first-tier nation and has used the partnership to good use to accumulate economic advantages while at the same time has kept China at bay.

Russian military build-up in the far east at Chinese borders are a testament to Russia’s lack of trust of its partner and if the current political scenario pans out favourably for Russia then who’s to stop a “fifth” front of possible Chinese military confrontation in Russian far east.

Also read: What Stalin did to Mao is what Putin will do to Jinping – a lot of humiliation and none of the festivities

A Chinese coverup: In June, 4% of China’s gold reserves were declared fake. Then the news magically disappeared