Turkey tried to save its economy by instigating Saudis against France, but it boomeranged gloriously 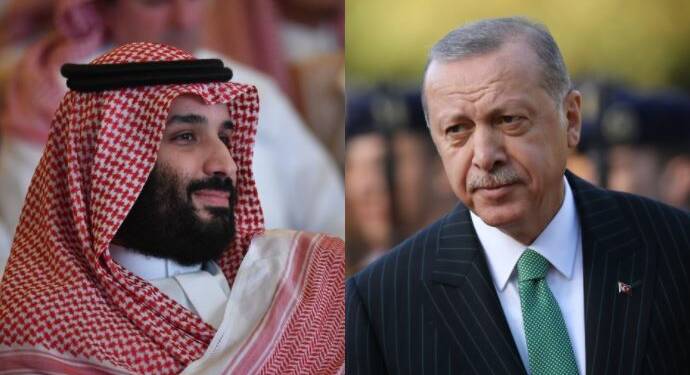 Erdogan is going berserk and his neo-Ottoman nationalism is feeding off Islamists and fundamentalist terrorists. As Ankara is going around picking a fight with everyone, it is taking a toll on its economy. With every passing day, Turkish currency Lira is crashing and as soon as Erdogan called for a boycott of French goods, the share market and the currency both plummeted. It may seem unplanned, but Ankara wanted to save its economy by dividing Riyadh regarding the situation in France.

The Saudis and other Arab countries are angry for Turkey continuously trying to snatch the leadership of Muslim Ummah from Saudi Arabia by always undermining the Arab interests be it in Libya, Syria among others. This is why Turkey has been under an unofficial boycott from the Arab world, and because of losing such a big market, Ankara’s economy has been bleeding.

After the beheading of Samuel Paty and the stringent French response against it, Erdogan by attacking France and pandering to the Islamists throughout the world wanted to gain recognition and leadership among the Muslim world. Thus, by calling for the boycott of French goods, among other things he tried to create a divide within Saudi Arabia and wanted to use this divide to further garner support for himself and in the long run delegitimize the house of Saud.

If Erdogan wants to lead the Muslim world, he needs to replace the recognition that the House of Saud enjoys. However, this action was also supposed to have a short term impact, that is, by creating a divide within Saudi Arabia and the Arab world at large, the wannabe Caliph wanted to dissuade Riyad from continuing the unofficial boycott of the Turkish goods and services.

He knew very well that the unofficial boycott can work so long the people are with the regime to boycott the Turkish products by their own free will. And by pandering to the terrorists and Islamists as well as legitimizing the terror attacks by Islamist fundamentalists, he wanted to gain a soft spot within the hearts of Saudi Arabian citizens. Thus, making the unofficial boycott redundant.

It was a high risk, high reward plan for Ankara. If successful, it would help regain some pace in the Turkish economy, and as part of the bigger picture, it will be able to come out as the legitimate heir of the Ottoman legacy. However, if unsuccessful, it will spiral the economy into a hell-hole of no return which seems to have already started happening as the currency is at a record low, with $1 equalling to 8.35 Turkish Lira and the investors are packing their bags for good. It will have also solidified the position of the House of Saud as the pre-eminent leaders of the Islamic world.

If the failed policies and abysmal foreign policy of Erdogan is any proof, it looks like the masterplan of Ankara has been unsuccessful as the Saudis have very efficiently managed the anger of its citizen and the call for a boycott against France. Now, the anger of Saudi citizen on the Turks is much greater, and it is evident from the fact that store owners are removing Made in Turkey goods from their shelves and replacing them with Made in Egypt. At other places, traders have hung Greek flags outside their stores to show the availability of Greek Products. And many supermarket chains have replaced Turkish goods with Greek goods.

The two countries are at loggerheads on a host of issues from the Libyan conflict to Qatar, Syria, among others. The effect of the Saudi boycott is much higher and will cripple the Turkish economy. Take, for example, the Spanish clothing brand Mango which has 55 outlets in Saudi Arabia, had to look for alternative manufacturing centres away from Turkey where they have been manufacturing for a long time.

Since the head of the Saudi Chamber of Commerce Ajlan al-Ajlan called for a boycott of everything Turkish, the impact was huge. Even Morocco restricted manufacturing and the Turkish food chains while hiking the taxes on imported Turkish goods to 90%. All this started a downward spiral for the Turkish economy. The banking sector and the Forex reserves were already reeling with the burden of financing proxy wars and bullying neighbours, the boycott by Saudi Arabia much more than anything Turkey could handle.

This is why, Erdogan thought by supporting hardline Islamists he will be able to garner support for Turkey and himself and by calling for a boycott of French goods he could deflect the anger of the Arab world towards Europe, thus saving his economy.

However, all these efforts have failed. The Saudis have managed the manufactured hate very efficiently and have kept their house in order. They have also managed to save their people from getting influenced by Turkish propaganda and have continued the boycott of Turkish goods throughout the Arab world.