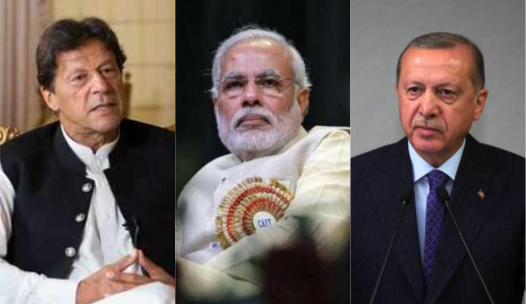 The unholy duo of Pakistan and Turkey has become a menace for the entire continent of Europe and while French President Emmanuel Macron mounts an offensive against the radical Islamic extremists bred and fed by Turkey, the sworn enemy of Ankara—Greece is now looking towards India to disintegrate the nexus of Turkey and Pakistan and free Europe from the clutches of Islamic terrorism.

As Turkey rakes up one hostile front after another, relationships among countries that disagree with Turkey are blossoming. One of them is India-Greece bilateral relations as the Foreign Ministers of two nations held a virtual meeting just a week after Greek Defence Minister Nikos Panagiotopoulos visited the Indian Embassy and emphasised the need for stepping up increased military ties

According to media reports, Greece Foreign Minister Nikos Dendias on Thursday briefed Indian Foreign Minister S Jaishankar on Greece’s commitment to resolving tensions in the Eastern Mediterranean in the context of international law.

A very warm virtual meeting with FM @NikosDendias of Greece. Discussed building on our historical friendship through enhanced cooperation in commerce, technology and culture. The agenda covered our respective regional situations. Will work closely in the multilateral domain. pic.twitter.com/v1C0GROI7N

Diplomatic sources pointed out that strengthening ties with India is important for Greece, given that India’s neighboring country of Pakistan is now conducting joint naval drills with Turkey.

The meeting, they said, is part of Greece’s relations-building effort with rising powers in the world such as India, which has been voted a non-permanent member of the UN Security Council.

Turkey and Pakistan—colluding together to send Islamic extremists to Europe

The Middle East and its surrounding region have witnessed several conflicts over the past year, including the ongoing Nagorno-Karabakh conflict in South Caucasus, the Yemen Civil War, the Syrian Civil War, the Libyan war and last but not least, the fight for resources in the Eastern Mediterranean. As a result, the refugees, in large swathes, taking advantage of Europe’s open-door policy entered the region and settled there. However, the refugees have been partly responsible for the extremist Islamic ideology that has festered in the region with incidents like the France beheadings and the Sweden riots becoming a common occurrence.

The aforementioned wars, many of them ignited by Turkey’s Islamist President Recep Tayyip Erdoğan, have changed the rules of engagement. These wars have reinvigorated the medieval mercenary culture of putting soldiers on sale at an industrial level.

Notorious terror-funding countries like Pakistan and Turkey have been putting soldiers and jihadists on sale in expeditionary wars far away from their country.

Pakistan, especially, all whilst struggling on the home front is sending its troops in hordes to help out Turkey in foreign lands and foreign wars, solely motivated by the Kashmir lollipop that Erdogan has given to Imran Khan Niazi. Turkish President Erdogan is continuing to fleece the terrorist state of Pakistan by selling it rosy yet unattainable dreams that together the two radical Islamist countries will take back Kashmir from India.

Ankara has been assisting Islamabad in the Kashmir discourse (Read: Erdogan’s speech in UNGA 2019, 2020), much to India’s chagrin and an indebted Pakistan is returning the favour by pledging its support to Turkey in its misadventures in West Asia, including providing military support in Syria and other neighboring states.

Read: Turkey sold dreams of Kashmir to Pakistan and took away everything from it

Pakistan’s contribution to increasing extremism in Europe can be gauged from the fact that it is also sending illegal immigrants to the continent and when confronted about it, Islamabad is refusing to cooperate.

Reported earlier by TFI, the breakaway country of Bosnia & Herzegovina on the Balkans in South-eastern Europe is being used by Pakistan as the main entry point for illegal immigrants and terrorists to Europe. This has created fears of Pakistan-sponsored terror attacks in the European continent.

In fact, Pakistan and Bosnia have been at loggerheads with each other. As per the Bosnian Security Ministry, there are currently more than 3,000 Pakistani illegals in the Muslim-majority country of Bosnia. According to Bosnia, Pakistan is not cooperating in identifying these Pakistani illegals who ought to be deported.

Greece and entire Europe is now pinning its hopes on India to pull it out of the mess created by Pakistan and Turkey together. While not being entirely successful, New Delhi still has the experience of countering the radical Islamic extremists, and the Narendra Modi government has already hinted at a significant change in its foreign policy by officially coming out in support of France and President Emmanuel Macron.

It is unprecedented because, earlier, New Delhi used to make diplomatically non-partisan and non-substantial comments about maintaining peace. However, this time around, New Delhi has chosen its side in the dark war to come ahead.

Greece has sensed the opportunity to bring India to the table and take Turkey head-on. The majority of EU nations have a cordial relation with India and they wouldn’t mind the PM Modi government trying to weed out the influence of a wannabe Khalifa from the continent. The war against radical Islamist ideology in Europe just got more interesting with India coming to the forefront.