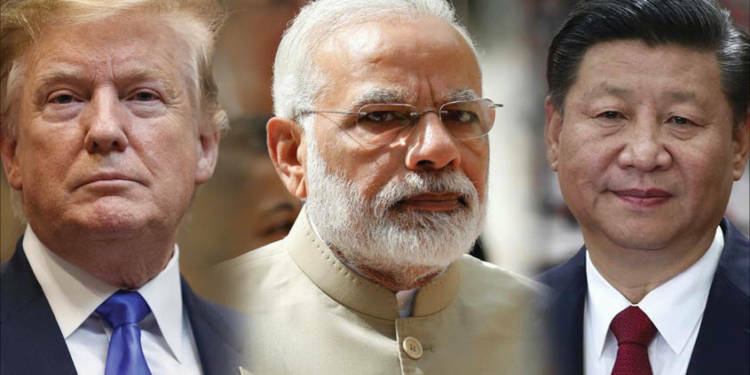 At the time of writing the article, Trump’s lead has been cut short as he now trails Joe Biden. Even though the lead is marginal and trump has the opportunity to cover lost ground, Trump’s loss might present India with an opportunity to thrust itself as the leader of the anti-China nexus.

The US started the war against the Chinese malpractices in trade, interference, coercion, and various illegal activities. President Trump, who shares a great bonhomie with Prime Minister Narendra Modi, sought to end China’s increasing influence in the region and limit its rise. The policies were a resounding success. But with an uncertain election, India should seize the opportunity if push comes to shove.

The United States, since the pandemic, has played its role with enthusiasm, rounding up the world against China. It did so successfully. The United States cornered Beijing in the South China Sea and the Pacific. It turned the EU around on China, took back Tunisia and Morocco, isolated China and Iran in the Middle East, and is playing its part in the South Asian and Southeast Asian regions. US Secretary of State Pompeo travelled through Asian Belt, through India to the Maldives. His message was simple. Unite against China.

But the US elections have thrown a spanner in the works. While Trump is still relentlessly pushing in his bid for the second term, the Chances of a more moderate President with an even more moderate outlook towards China has certainly increased.

India has been at the forefront of taking the fight against China. India broke myths and bones when the two armies collided at the Galwan valley. It certainly showed the world that China’s status as a military superpower is false.

India’s push in the region gave the United States the power to act upon its decisions and it provided India with a diplomatic and economic deterrence to China. India acted upon this freedom against Beijing and banned 224 mobile applications. While at the same time India increased bureaucratic red tape on Chinese investments in the country.

This all reflects New Delhi’s compounded problems with Beijing since the pandemic and even before.

India invited Australia to the Malabar exercise and incidentally formalized a militarized QUAD while Germany launched its own India‘centered’ “Indo-Pacific” policy. India’s further diplomatic triumphs are in the Maldives, Nepal, Morocco, the European Union, Bangladesh, and even China’s so-called close ally Russia.

India’s influence in Central Asia has also increased. India has worked closely with Russia in creating a place for itself in Russia’s sphere of influence. Moreover, India’s diplomatic reach within the Kremlin showed when Russia suspended China’s S-400 missile system. Moreover, at a time when China was at its most vulnerable, Russia refused to offer any support.

India didn’t even stop there. It even attacked China’s One China policy as the Indian media celebrated Taiwan day and even broadcasted an interview with the Foreign Minister of Taiwan, Joseph Wu, just before the Taiwan national day. China tried to coerce the media but forgot that unlike Chinese media, India’s press is independent of state control.

India attacked China left-right and centre ranging from its BRI to its One China policy. India’s flamboyant diplomacy helped India countering Chinese belligerent practices and exposing them. Though on paper India played second fiddle to the US’ anti-China policy but in reality both the states matched their steps to march against Beijing.

The Chinese virus-induced pandemic sent shockwaves around the globe. Supply chains were hit hard as Beijing went offline. The World, except for China, suffered tragically. While WHO’s handling of the pandemic has been criticized, it is China’s stocks that have lowered in value.

Thus at a time when there is even a fraction of chance in a change of Washington’s policy towards Beijing, India should not down tools. Instead, it should become the face of the neo-anti-china policy. India has the support of the world and now it is time for India to take a more important position in the anti-china spectrum.

India has proved that it can rise to Chinese threats and deliver, that it won’t back down from the paper dragon’s useless threats. Thus, if Trump, through means of illicit voter fraud, does lose the elections, New Delhi should stand ready and welcome the new role with open arms.