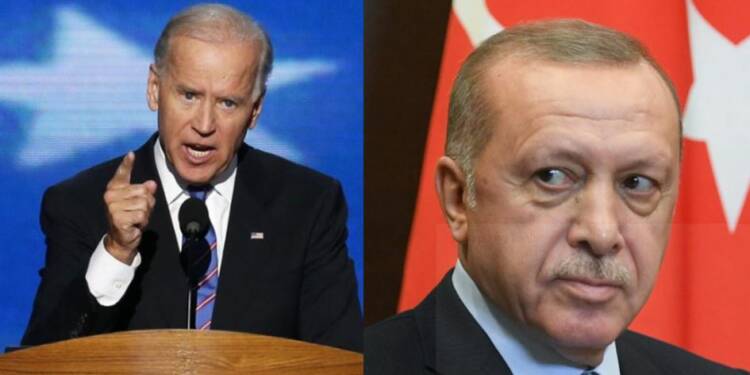 Change in any country’s political leadership reflects in its foreign policy and, when it comes to the transition of political leadership in the USA, the most powerful country in the world, it is significant for the countries world over. This time around, with Joe Biden coming to White House, Turkey is really scared.

Turkey has tried to leverage Erdogan’s friendship with the current US President Donald Trump and has gotten away with a lot of irresponsible actions. Trump had warned of actions against Ankara, but he was not heavy-handed against Erdogan. However, Joe Biden is more likely to take more punitive actions against Erdogan and Turkey.

Joe Biden has been the Vice President during the Obama administration and has spearheaded increased military presence of the USA on foreign soil. The regime-change war in Syria and supporting the Syrian Kurds were Obama led operation. This makes it even more important for Biden to take on the task of reversing Trump’s decision of getting out of Syria and teach Erdogan a lesson for launching offensives against the people who were the US allies.

Trump was a non-establishment President, and he had gotten to the office with the promise of bringing the troops back from wars on foreign soil. He has started working on the same by thinning out troops from Afghanistan and then moved ahead with bringing troops back from Syria. While the US troops were on their way back, Erdogan ordered an invasion of Northern Syrian territories and invaded the Kurds, the exact group which fought side by side with Americans. It was seen as a betrayal on the part of Washington and the worse part was, the USA did not take any serious action against Ankara. At the same time, Joe Biden, on his presidential race, stated, “Unlike President Trump, I know what it takes to negotiate with Erdoğan. And if I were president, I would make him pay a heavy price for what he has done.”

Unlike President Trump, I know what it takes to negotiate with Erdoğan. And if I were president, I would make him pay a heavy price for what he has done. pic.twitter.com/vv4P1q7B5S

Turkey has woken up to the Biden victory and to its dismay, all the investment Ankara made in keeping its relations cordial with Donald Trump has gone to waste. Now all its efforts to get hold of a strategic and tactical foothold in the Eastern Mediterranean will be challenged. Smelling the coffee, Turkish Foreign Minister Mevlüt Çavuşoğlu said, “Regardless of which candidate takes office in the U.S., we will pursue a sincere approach to improve our relations,” added “People have an impact, positive or negative. The sincere friendship between our president and Mr Trump has continued through the most difficult times”.

Turkish journalist Aslı Aydıntaşbaş said, “Ankara hopes to enter into negotiations from a strong position, using as a lever their S-400 and Turkey’s relations with Russia. But the expectation is that things will get worse before they get better. Without Trump’s shield, Ankara is worried that an angry US Congress will have a free ‘hand’ to impose sanctions on Turkey.”

With Joe Biden at the realm, Ankara will be further cornered, and it will hurt more, given the economic strain it is facing. A more punitive action from Washington would be devastating for Turkey, but, it is coming. Biden is all set to take some flashy steps to exclaim his coming as the president, and with all the reasons Turkey is providing, Erdogan could be the first in the list.

It does not take a soothsayer to tell what the future holds for the US-Turkey relations. Turkey should expect some rough roads ahead with respect to the bold adventures that it has undertaken in the Mediterranean. It is sure to unfold in the coming future that the new regime is not going to just pass a fleeting eye to all the actions happening in and through Turkey. Only time will tell what the severity of these punitive measures would be.