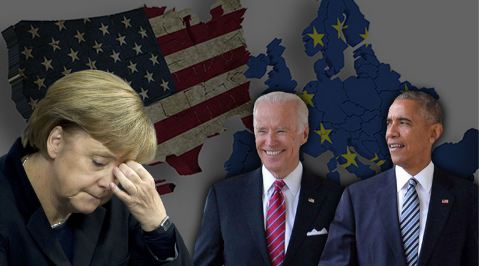 The liberal European world is celebrating Joe Biden’s victory in the US Presidential polls. For four years, the European Union leadership almost had a bitter fallout with Donald Trump who was quite clearly undermining the Transatlantic ties between the US and the EU. But will Biden’s rise to power suddenly make the EU and NATO relevant? We dug a little into the past and found that even Biden can do little to salvage the US-EU relationship.

The EU expects Biden, a Democrat, to help restore the US-EU alliance, given the strong ideological bond between the Democrats and the EU. But in 2013, Barack Obama, a Democrat President, had a bit of a fallout with German Chancellor Angela Merkel herself. There were reports that Obama had got Merkel’s phone bugged. Merkel was believed to be “livid” but did not make a huge issue out of the entire incident.

Obama bugging Merkel’s phone was quite an incident. Both Obama and Merkel were leaders of the liberal world, and the two certainly enjoyed a good diplomatic relationship. But as the President of the US, Barack Obama could not trust Merkel, the German Chancellor and the de facto EU leader.

Despite the ideological bonding between the EU and the US, Obama couldn’t have ignored the fact that the Transatlantic relationship is becoming irrelevant, and that the EU’s own significance is declining with China’s meteoric rise and Russia’s declining strength. Such geostrategic changes in the world are causing cracks in the US-EU relationship that started becoming visible during Obama’s Presidential term itself.

Now, if Biden comes to power, he will have to live with the same realities. This is not to say that Biden doesn’t share a close ideological bond towards the liberal European leaders. He definitely does. But as the US President, he cannot afford to gloss over the rising Chinese threat in the Indo-Pacific and the need to shift American focus from the Atlantic to the Indo-Pacific.

As for Trump, he never had an ideological bias towards the EU. So, he could easily cut the number of American troops in Germany, a key NATO member, by 25 per cent. The Trump administration could as well question Germany about the Nord Stream 2 pipeline, an ambitious project to supply natural gas from Russia to Germany. Trump could argue why Germany and the EU were making Russia rich while also getting the US to provide protection to the EU from Moscow.

Moreover, Merkel was refusing to accept Trump’s leadership of the democratic world against China. This was again causing a rift in the US-EU relationship, as much of Trump’s fury got directed at Berlin and Brussels.

Biden isn’t going to be as harsh on the EU as Donald Trump. Throughout his election campaign, the EU was rooting for him and Biden won’t go out of his way to publicly banish the EU or NATO. But any US President, including Biden, will not be able to reverse or undo the damage that Trump inflicted upon the Transatlantic relationship for some very natural reasons.

So, if Trump pulled out 25 per cent of American troops from Germany, Biden will not redeploy them because even he knows that the EU and NATO are irrelevant bodies.

We won’t be surprised however if Biden’s rise to power translates into optics and soft power display of the ideological bonding between Democrats and the liberal EU led by the German Chancellor Merkel or her successors. But even such soft power display won’t really herald a golden era in US-EU ties, as the Brussels-based intergovernmental bloc will remain anachronistic and irrelevant in the Indo-Pacific dominated world order.