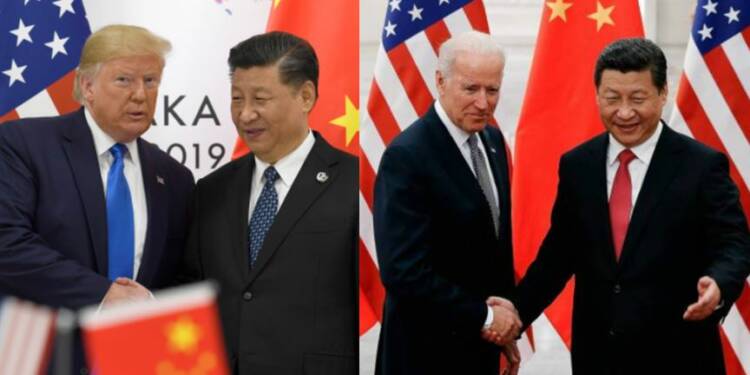 Joe Biden has once again showcased how he will flat-out refuse to punish China, rather in his moderate, he plans to force the ‘Paper Dragon’ to play by the rules. In another showcase of Biden’s China-love, his plans to overcome the Chinese threat displayed a moderate approach which will certainly be unable to pan out in a hostile international structure. While he may become the next US president, his affection for China and Xi-Jinping will surely earn him the title of the President who surrendered the US leadership.

While Joe Biden has always been adamant on how he wishes and plans to punish China for its misdeeds, at the end of the day, he goes on and plays right into Chinese hands. While Trump went all out to showcase the malaise which infects the International organizations, Biden is obsessed with undoing all of it. His spite for Trump and love for China will unequivocally put US interest’s in danger and put China in-charge.

Read More: Henry Kissinger, the old fool, is back and he is making his love for China very obvious again

Hence, Biden’s love for China was on display again when he was asked about how is he planning to punish China, with more sanctions, or tariffs. He replied: “It’s not so much about punishing China, it’s about making sure China understands they’ve got to play by the rules. It’s a simple proposition.”

While in a ‘utopian’ world where China was not infecting the world with a virus, was not corrupting international organizations, was not aggressively debt-trapping and destroying the sovereignty and sanctity of other states, where China was not an expansionist power, maybe then Biden’s remarks would have had a plausible impact.

But in a world where all of this is a reality and already underway, Biden’s plans to deal with the Chinese apathy to international rules, is a case of missing the forest for the trees.

Moreover, While Trump’s policies aimed at highlighting the erosion caused by the corruptive and disruptive Chinese forces in the international organizations, Biden’s intention to re-join the WHO highlights the utopian dystopia in presidential candidate resides and plans his policies.

He said: “We’re going to re-join on day one as well and it needs reform, acknowledge, and re-join the Paris Climate Accord. And we have to make sure that the rest of the world and we get together and make sure there are certain right lines the Chinese understand.”

There are ‘fifteen’ separate bodies under the United Nations which ‘help’ in giving the anarchist world a structure, four of them are headed by a Chinese. Moreover, as was evident with WHO’s response to the Wuhan Virus the influence of the Yuan has seeped through the structures which uphold a decorum in the international arrangement.

Trump’s policies created massive pressure and highlighted the corruption in international organizations which consequentially created a massive demand for reforms. Joe Biden’s spite for Trump and his policies shows that he is unwilling to take a hard stand, he is unwilling to showcase leadership, a trait prevalent in the previous US presidents, and is willing to bow down to Chinese forces when shove comes to push.

Highlighting the urgency with which Biden wishes to rejoin the WHO is a sign that instead of willing to push forth US’s interests in the world, Biden is trying to keep the Chinese happy. A leader of a superpower who is uncertain about the capabilities of his country is a shame on all the principles for which the US stands for.

While the EU, Britain, India, Japan and Australia have identified China as the immediate threat to free trade and democratic principles around the globe, Biden’s stand is unfaithful to previous US Presidents. While he may advocate for a peaceful democratic channel to restore normalcy, his refusal to admit the Chinese threat is a danger for the US’s interests and its allies that have upheld the principles which the US now refuses to stick to.

In a changed international scenario, where the United States does not enjoy the political and clout in the international domain, a moderate policy will be ineffective in seizing back the control. Moreover, Biden would only become an enabler to Chinese policies and from the looks of it has already accepted the US’s position as a second-grade power.