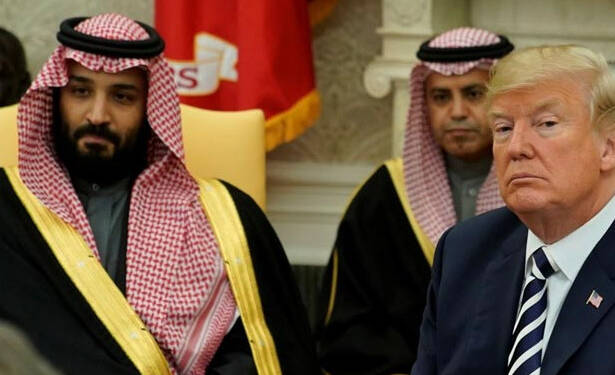 Saudi Arabia has been a long-standing ally of the USA and a highly strategic one too. However, since the past few years, there has been a divergence of interests between the USA and Saudi Arabia. However, due to the volatility in the Middle East, the differences were buried for a while. They have come to fore again with the Saudi Arabian state-controlled oil company Saudi Aramco considering the idea of floating Yuan-denominated bonds in an industry which has traditionally been dominated by US Dollars.

The Saudis for a long time had enjoyed an unhinged US support and attention as they were the most important pivot for Washington in the Middle East. However, since the USA has become a net exporter of crude oil, the economic importance of Saudi Arabia has decreased. In addition to this, the USA has also removed its security umbrella from Saudi Arabia partially. The Saudis are also miffed at the US because they have maintained a strategic distance from the struggle among the oil-producing countries in the region. All this, among the other reasons, is why Saudi Arabia has decided to send signals to the USA to understand that there can be consequences if there are attempts to unilaterally change the status quo.

It is the second time when Saudi Arabia has sent a subtle message to the USA. Previously, as reported by TFI, Riyadh had developed a facility to process uranium yellowcake from Uranium ore which was in line with its long-standing Nuclear energy ambitions. The most interesting bit was that the development was possible with Chinese support.

This time again, prospects issued by the world’s largest oil company – Aramco from Saudi Arabia, stated that Renminbi notes “may be issued” under its bond program. Though the company did not provide any detail about the timing and the scale of it, it laid out risks involved in floating the Yuan notes, including the currency’s limited availability and acceptability outside China.

China, too, is aggressively seeking to promote international use of Yuan and in line with this; it has started cultivating ‘petroyuan’, establishing a market for yuan-denominated crude oil futures in Shanghai. This is where the interests of Saudi Arabia and China converge, and the former is trying to leverage this convergence to send a message to the USA, that is, stop challenging Riyadh and showing it cold feet, or else it would lose a good friend in the Middle East for real.

Riyadh has made its nuclear bomb ambitions overtly clear, with the Crown Prince Mohammed bin Salman pledging that Saudi Arabia would not hold back from efforts to develop/ acquire its own nuclear bomb in case Iran did not budge way back in 2018. And the Chinese providing technological support for Saudis to develop nuclear capability brings China directly into the Middle Eastern equation.

Read more: ‘We can go sit in China’s lap anytime,’ Saudi Arabia has sent a subtle message to US.

Now again with this signalling, a move away from being part of the US dollar led the crude oil industry towards empowering Chinese Yuan in its efforts to replace the USA for the same. The messaging comes in such a time when it is becoming obvious that Biden will be taking charge of the USA. And Biden has made comments that the USA will try to bring back the nuclear deal with Iran if the latter agrees to come back to the table and agree to the terms.

With all the previously ongoing odds in the Saudi-USA relationship, Trump was harsh on Iran and the anti-Saudi forces in the region, which was highly welcomed by Riyadh. At the same time, the US was also supportive and proactively strengthening Riyadh’s allies in the region – be it Bahrain or the UAE. However, if Biden comes to power, he may try to resurrect the dead Iran Nuclear Deal and in the process may compromise the allies in the region. It may very well be a major concern among the ruling elite of the Kingdom of Saudi Arabia. This is the reason why it has again tried to signal Washington that if its position in the Middle East is compromised any further, then there may be consequences.

The USA is already grappling from the socio-economic churn, and at a time like this, Saudi Arabia is sending signals to Washington, not to ignore its all-weather ally in the Middle East. To give teeth to its words, Saudi has suggested floating a Yuan bond for cured oil in the future. One cannot ignore the signalling, and if Biden is smart enough he will smell the coffee and take necessary actions to satisfy its ally in the Desert.