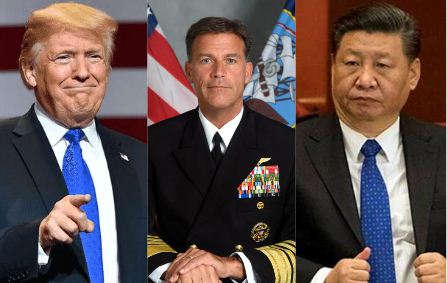 There is no certainty about the direction in which the White House would go, following the disputed US Presidential poll results last month. But one thing is for sure- the Chinese People’s Liberation Army Navy (PLAN) will have to face a tough and aggressive US Navy regardless of the man at the helm of affairs in the White House.

In a new nightmare for China, the Trump administration has appointed a new chief for the Pentagon’s all-important Indo-Pacific Command (INDOPACOM). Admiral John Aquilino, a naval aviator and veteran of famous US military operations- Enduring Freedom and Iraqi Freedom, will head the Pearl Harbor-based military command. The appointment of an experienced naval commander is a statement of intent from Donald Trump, and also reflects how Washington will keep deflating China’s plans to assert dominance in the Western Pacific region.

The INDOPACOM is the most lively symbol of American military firepower. Boasting of as many as 380,000 servicemen, INDOPACOM cooperates with 36 countries spread across 14 time zones, extending from the Western America coast to East Africa. This also happens to be the region where the Middle Kingdom wants to assert power. But with the appointment of a tough naval commander, the US is debilitating the paper dragon.

Admiral Aquilino will replace outgoing Admiral Philip Davidson, who has himself played a big role in taking on a belligerent China in the Indo-Pacific region. During Admiral Davidson’s tenure, there was an unprecedented increase in US Navy’s Freedom of Navigation Operations (FONOPs) in the hotly contested South China Sea.

It was also during Admiral Philip Davidson’s tenure that the US started encouraging joint exercises with like-minded powers, such as the Malabar Exercise with the QUAD comprising India, the US, Japan and Australia. The US also promoted military ties with regional powers like Taiwan and Southeast Asian nations like Vietnam and the Philippines.

But with Admiral Aquilino, things are expected to escalate even further as the White House will look to put China in its place. The new Pentagon commander is expected to oversee a number of reforms, the most important of them being the creation of a dedicated “expeditionary” fleet focussed entirely on China.

The all-important appointment has come at a crucial time- shortly before a possible transition in the White House depending upon how the US Presidential poll results unfold. But truth be told, China should expect the nightmare of dealing with a tough US Navy commander as the INDOPACOM chief even if a Biden administration comes to power.

Biden’s team has already suggested that it will adopt Trump’s “Free and Open Indo-Pacific” doctrine, which saw the Pentagon mobilising resources around the Western Pacific and the hotly contested South China Sea, in particular. Moreover, Michele Flournoy, Biden’s presumptive US Secretary of Defence nominee is believed to be a China hawk and is expected to favour a harsh stand against the Chinese PLA Navy.

The latest INDOPACOM chief appointment suggests that the Pentagon will unleash hell upon the Chinese Navy, a trend that may as well be taken further by a Biden administration.

How Macron has totally changed the game in the Indo-Pacific with talks, trade and military ties with important countries