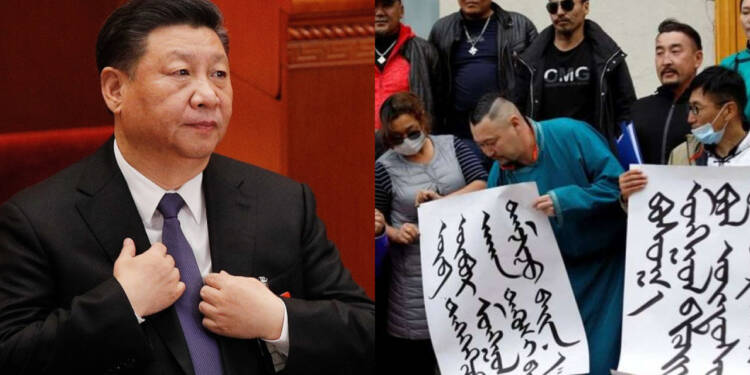 The residents of China’s Inner Mongolia region have been protesting against reforms replacing Mongolian with Mandarin as the language of instruction in schools for core classes. Critics of Beijing’s language policy in Inner Mongolia, home to an estimated 4.5 million ethnic Mongolians, say the Chinese policies mirrors efforts to assimilate local minorities into the dominant Han culture in other border areas such as Xinjiang and Tibet.

China’s policies to assimilate other ethnic regional minorities into the Han have been criticized all around the world – from using coercive physical measures in Xinjiang, to enforcing policies, to destroying the ethnic identity by systematically replacing the culture starting with language.

Read More: China’s breakup is not far away as Inner Mongolia stands up boldly against Chinese occupation

Eight decades ago, when it was governed by a Soviet-dominated dictatorship, Mongolia’s government adopted the Cyrillic script, but now it also supports the revival of the ancient script that had been left as the preserve of the elderly or language specialists.

Hudum also has a fresh wave of popularity that offers activists the chance to make use of computers and social media easier, helping bind ethnic Mongolians across Russia, China and Mongolia. Mongolian tech developers are working to incorporate the vertical script into new apps, language translators, and social media platforms.

Moreover, more than 100 demonstrators wearing traditional Mongolian tunics gathered at the main square of Ulaanbaatar on the arrival of Chinese foreign minister Wang Yi on a visit in September.

The President of Mongolia and the former sambo wrestling champion, Battulga Khaltmaa has also begun his Hudum courses on television, which inspire the public to incline towards conventional literature. The state broadcaster now contains the subtitles in the two scripts, and the government said that all official announcements will be made in both Cyrillic and Hudum by 2025.

But difficulties lie ahead because much of the script employs ancient vocabulary not known to contemporary Mongolians, and the use of the Cyrillic alphabets have also brought about many changes in the grammar.

Currently, school students have only to learn the Mongolian script for one year, but that is likely to change as under the new proposed government education norms textbooks of History and literature will be converted into the Traditional script.

The rise of Chinese policies to assimilate Mongolians into the Han culture has already provided a fresh impetus to Mongolians to stand up for their language. In a classroom in the capital, students pass the Cyrillic alphabet of the Soviet period. They are learning the standard Mongolian vertical script dating back to the Khan empire.

Professor Batbileg Lkhagvabaatar leads the course, tracing the flowing lines, drawing characters on a whiteboard, and describing the laws of grammar to the youthful men and women and the children gathered.

They have been increasingly motivated to study the ancient texts, as a language of instruction for classroom classes, following protests of their families in China’s Inner Mongolia, against reforms replacing Mandarin with Mongolian.

Language is the most beautiful, clearest, and most logical feature of culture. China aims to breakdown the Mongolian culture systematically but the Mongolians have realized that their language is the key to their freedom and the basis of their ethnicity from the dominant Han culture.

As Alphonse Daudet wrote in “The Last Lesson”, ‘Language is the clearest and the most logical; that we must guard it among us and never forget it, because when a people are enslaved, as long as they hold fast to their language it is as if they had the key to their prison,’ China must understand why its crackdown on Mongolia won’t be fruitful.

A war that no one talks about: Yemen is a huge geopolitical playing field that needs to be rescued immediately