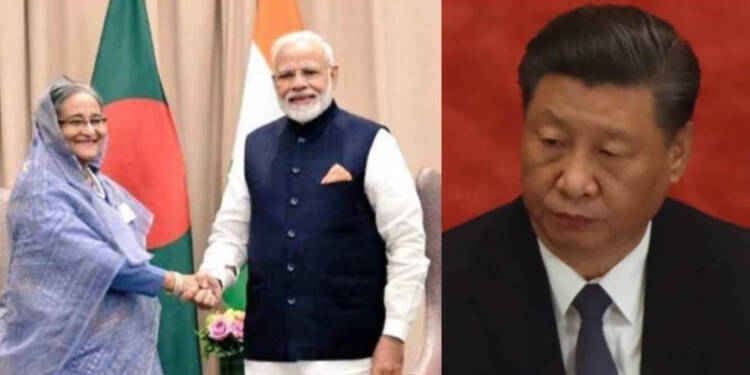 China has been pushing its BRI all over the continent, Central Asia, South Asia, South East Asia, and East Asia. Using its aggressive wolf warrior diplomacy and debt trap policies, it has been coercing states to bend to its BRI and give rise to the ‘China Dream’ of Xi Jinping, but it seems not all of the states are ready to bow down to a belligerent China. Bangladesh’s confession to join the massive India-Myanmar-Thailand Highway Project is a direct provocation to the Chinese as it looks to join India in its plan balance and contain the Chinese rise in the region.

Sheikh Hasina “expressed keen interest in the ongoing India-Myanmar-Thailand trilateral highway project and sought support of India for Bangladesh to connect with this project with a view to enhance connectivity between the regions of South and South East Asia,” said a joint statement issued post-summit.”In the same spirit, the Indian side requested Bangladesh to allow connectivity from West Bengal (Hilli) to Meghalaya (Mahendraganj) via Bangladesh,” the statement added.

Hasina and Modi took stock of the continued bilateral connectivity steps and welcomed the latest initiatives such as the completion of the second enhancement to the Protocol for Inland Water Transit and Trade (PIWTT), the processing of the transfer of Indian products through the Sonamura-Daudkandi protocol route to Agartala under the PIWTT scheme.

Moreover, Both the leaders agreed to expeditiously operationalize trans-shipment of Indian goods through Chattogram and Mongla Ports.

Also, the two PMs agreed to the early operationalization of the Motor Vehicle Agreement for Bangladesh, India, and Nepal, through the early signing of a Memorandum of Understanding (MOU), to start moving goods and passengers, with a provision for Bhutan to join at a later date for better connectivity and simpler traffic between passengers and goods.

Among increasing connectivity, the two countries signed seven agreements in areas of hydrocarbon, the supply of equipment, and agriculture.

In early December, in what was a clear signal to China of Bangladesh’s resistance to Chinese relations, when Bangladesh declined a visit of Chinese Defense Minister Wei Fenghe. After being humiliated in Nepal by getting to refused to meet PM Oli, the Chinese Defense Minister sought to salvage the trip by setting his sight on Bangladesh. But, Bangladesh went a step ahead and outrightly rejected the notion of even receiving Fenghe.

Moreover, earlier in October Bangladesh extended an invitation to the Indian Prime Minister Narendra Modi to jointly celebrate the Independence Day of Bangladesh which India accepted. At the time, Bangladesh’s Foreign Minister Dr AK Abdul Momen said: “Our victory is India’s victory. We should celebrate together.”

Besides, the coronavirus has impacted Bangladesh’s relations with China. In early October Bangladesh seemingly prioritizing India’s interests over China, scuppered the Sonadia Deep-Sea Port which was supposed to be jointly developed with China.

While China was keen on developing and financing the project as it would’ve boosted its BRI project, Bangladesh will now develop a deep-sea port at Matarbari, 25 km away from Sonadia with the help of Japan, with the port expected to be functional by 2025. It is pertinent to note that Japan and India share close relations and India will have no qualms about Japanese involvement in Bangladesh.

Bangladesh’s actions in aiding India’s ambitions and consequentially limiting China has been structurally achieved. With the last development of Bangladesh getting increasingly keen on joining the trilateral roadway project will severely limit the achievements of the BRI. India helped liberate Bangladesh from a genocidal Pakistani regime and those sentiments have not been forgotten as Bangladesh has reiterated its commitments to jointly develop and grow with India rather than be a second-tier investment strategy of the Paper Dragon.