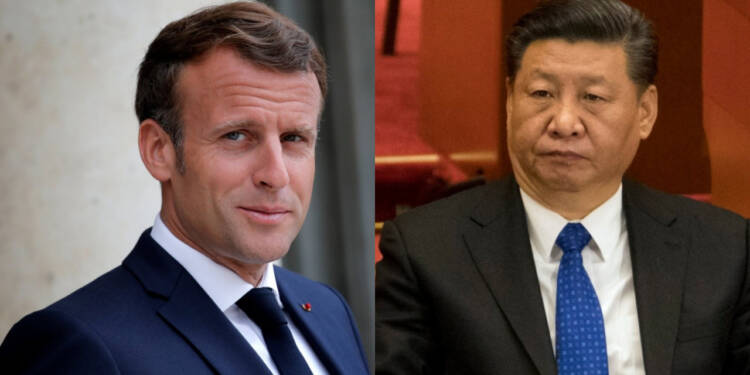 France’s grand entry into the Indo-Pacific region facilitated by India and other Quad members has dispatched Jinping into depression and his crime syndicate political party CCP can do nothing but lick its wounds.

After France was admitted into the Indian Ocean Rim Association last week, there was no statement from the Chinese side, the usual barking, which has become China’s hobby was also missing this time. This is probably because China is left with no cards to show. It has realized that the blatant and unnecessary aggression that it has been trying to project does not work on big countries.

China has come to its senses that its tool of intimidating other countries has become blunt and the bigger countries are here to give China a stern lesson. The Quad, in association with other democratic countries, has ensured that China’s dream of neo-colonization will have a painful death and the CCP’s ‘wolf-warriors’ shall remember it throughout their life. France’s confident entry into the Indo-Pacific arena where China is desperately trying to bully smaller countries has made China bleat like a baby lamb.

Xi Jinping’s fear of the maritime power of France and her allies has made him reconsider his foolish strategy. He is now pleading at Macron’s feet to come to his side and save his rear end. He seems to have forgotten that China has now become the single biggest evil for world peace.

With world supply chains diversifying, China is now like the unnecessary and ugly weed that grows in a beautiful rice field. This weed strictly needs to be uprooted urgently and the existing crop needs to be immunized for any future pandemic. The removal of unwanted weeds will make the rest of the field healthy and dead remains of the weed shall become manure for the soil too.

Adding to China’s misery, it is widely speculated that France shall be brought into the Quad structure, and will soon join the joint maritime forces of Quad+1, patrolling the Indo-Pacific waters to prevent any malicious Chinese incursions and interferences into international waters.

A hopeless China still hopes that France will be a little bit lenient on it unlike India and the US, thus it is wagging its tail and doing tricks to butter-up Paris like the patronizing piece in the state propaganda Global Times.

In the article, the newspaper recounts how Chinese President Xi Jinping after feeling the heat under him called French President Emmanuel Macron and requested him to go easy on China. President Xi tried to bait Macron with the China-EU investments agreement and projected the thought that he sees Macron as the undisputed leader of the European Union. He also hoped that patronizing Macron will give him a respite in China’s ongoing dispute with the US under the Trump administration.

Jinping is also optimistic about the upcoming Biden administration in the US in the hope of continuing China’s spying and interfering activities in the US and elsewhere in the world. But it appears that Chinese officials read a lot of fairy tales where everything (in China) becomes pleasurable and everyone (in China) lives happily thereafter, but everyone else experiences hardships and pain.

In a realistic scenario, the ‘Disney princess‘ like the dream of China isn’t meant to last long. China’s overconfidence in its jingling purse and bad-boy behaviour is taking the Chinese dream straight to the gutter that falls into the Yellow River.

China’s aggressive and evil diplomatic fraternity that had been bouncing on its rear end since the start of the Coronavirus pandemic is currently sitting back and pondering over the foolish decisions it made in its hollow dream of world domination. Almost every country in the world is now unhappy with the behaviour and practices that the Chinese officials have assumed.

From the all-out uncouth and uncivilized Twitter spats with esteemed experts and journalists and the massive cover-up strategy after the city of Wuhan ‘gifted’ Coronavirus pandemic to the whole world- the 21st century which China hoped will belong to it, is going to bury the CCP dream six feet under the ground, well before the centenary celebrations of establishing the ‘Not-People’s Republic of China’ take place.

Russia officially asks India to mediate between it and QUAD nations