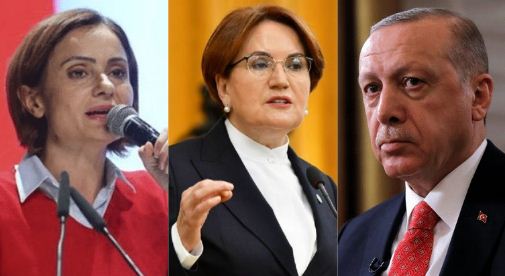 Turkish President Recep Tayyip Erdoğan has been living dangerously. Erdoğan is infamous for foreign policy adventurism that has even led to sanctions getting imposed on the Turkish economy. But even at a very domestic level also, Erdoğan’s behaviour has triggered instability. As such, Erdoğan’s efforts to centralise power has led to speculations of discontent within the Turkish military leadership, giving rise to predictions about yet another military coup in the West Asian country.

However, now it seems that even the Turkish Army might not have to carry out a coup on the belligerent leader. In all probability, one of Erdoğan’s two high-profile political challengers may overthrow his brutal regime. We are talking about two Turkish female politicians- Meral Aksener, head of centre-right Iyi Party and Canan Kaftancioglu, Istanbul head of centre-left CHP.

Aksener and Kaftancioglu reflect two different ends of the political spectrum and ideology. Yet both of them are becoming a potential threat to Erdoğan. Aksener is a nationalist leader and a part of Turkey’s political elite, having previously served as the country’s Interior Minister. She is described as “Asena” on the lines of a mythical Turkish she-wolf.

On the other hand, Kaftancioglu is a more liberal leader. Representing Turkey’s main opposition party, CHP that has a centre-left ideology, Kaftancioglu is comfortable with her image as a “motorcycle-riding, leftist feminist.”

Anyhow, both these women politicians are challenging Erdoğan in their own unique ways. Aksener’s ambitions of replacing the Turkish President aren’t any secret. She had even run against him in 2018. Today, she is taking her party in a direction different from the one taken by Erdoğan.

Erdoğan has stitched an alliance with the far-right MHP. Erdoğan’s AKP is itself turning more right-wing. On the other hand, Aksener is moving her party towards the centre and has even broken away from MHP. Nonetheless, she remains a formidable leader with nationalist credentials. Erdoğan wants her to join the ruling coalition, but Aksener keeps snubbing him and has turned down calls to join the ruling alliance, saying, “not even if they put a gun to my head”.

As for Kaftancioglu, she is rising in stature especially after having orchestrated AKP’s humiliating defeat in Istanbul last year. The 48-year old woman politician remains on Erdoğan’s target. Pro-AKP media has been running a smear campaign against her, and the Erdoğan administration has filed a number of criminal cases against her including charges like insulting the President, inciting hatred, promoting terrorism and covering up allegations of sexual assault against her party colleagues.

Kaftancioglu’s supporters, however, feel that she is a real challenger to Erdoğan’s regime, which is why the present dispensation is going after her. Also, her increasing popularity in Istanbul, where nearly a fifth of Turks live makes her a real threat for the sitting Turkish President.

Both Iyi Party and the CHP realise that they have a real shot at defeating Erdoğan in 2023. The AKP leader had won the 2018 polls with a humongous mandate, but a lot has changed over the last two years. Erdoğan’s reckless decision to throw Turkey into conflicts in the Eastern Mediterranean, Nagorno-Karabakh and Libya hasn’t inspired much confidence within or outside Turkey.

Erdoğan is passing through the most difficult phase of his political life. And this is an opportunity that Aksener and Kaftancioglu- Turkey’s two flamboyant female politicians cannot miss.