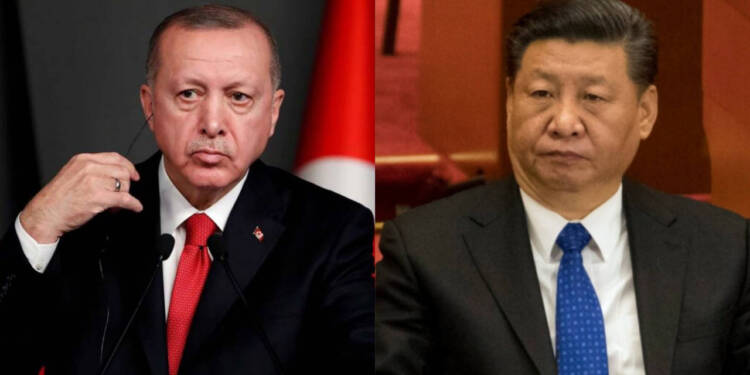 Turkey’s President Erdogan is in a nightmarish situation for his political future right at the beginning of 2021. When his country is struggling with the plummeting economy and currency, Erdogan cannot even find support from the religious fanatics that he, himself had created. Though Recep Tayyip Erdogan, toeing the line of Pakistan, had called the removal of Article 370 a black day for Kashmiri Muslims, he now stands surrounded as a bigot in his own country. The people of Turkey are opposing the agreement to extradite Uyghur Muslims to China. The common people are now raising their opinions and saying that the Turkish parliament should not approve this agreement or it will lead to increased atrocities on the Uyghurs in China.

Turkey had signed an agreement with China in 2017 named Sino-Turkish Extradition Agreement. The Parliament of China accepted this agreement last week though it has not been approved by the Turkish Parliament yet. Under this agreement, many refugees living in Turkey and Uyghur Muslims can be extradited to China on charges of involvement in terrorist activities, which somewhat similar to the treaty signed between Switzerland and China. This is the very agreement with China which is increasing anger among the Turkish people, as the hypocrisy of Erdogan is in full display.

As per news reports, Foreign Minister of Turkey, Mevlut Kavusoglu, while trying to quell the anger of the people, said that even if the agreement is approved in the Parliament, it will not mean that the government will agree to deport all the Uyghur Muslims. He said that the government has included many such articles in this agreement, based on which it can reject the demand for extradition.

In China’s Xinjiang province there is a population of about 20 million Uyghur Muslim. Their language is Turkish and thus they feel closer to Turkey than to the Han people of China, culturally. China has put around 10 lakh people in detention centres in the name of educating them. Initially, Turkish President Erdogan also used to openly voice his support for Uyghur Muslims, but after getting into all the mess and befriending China, he has kept strategic silence on this issue. This situation seems laughable for the fact that it is the same Erdogan, who not long ago was trying to become the caliph in the 21st century.

Foreign Minister of Turkey, Mevlut Kavusoglu, in an attempt to save the government from further humiliation has said, “We are worried about the Uyghur Turks. We have told China that we want to send a delegation to Xinjiang, which will investigate the situation of the Uyghur Muslim.”

Meanwhile, the exiled leaders have alleged that China is deliberately delaying sending the first consignment of the COVID vaccine to Turkey to increase pressure on the Erdogan government to approve the agreement in the Parliament. And why will it not, given the vulnerable situation the Turkish President has put his country in.

According to a report published in the Eurasian Times, Turkey is also sourcing the COVID-19 vaccine from China. Analysts fear that China may pressurise Turkey to sign the extradition agreement. Chinese human rights organisations told The Guardian that the deal would increase the risk of handing over the Uyghur Muslims to China. They can be imprisoned and tortured there.

Turkey is under pressure from human rights organisations to not approve the Sino-Turkish Extradition Agreement in the parliament with China on extradition. Human rights activists say that because of this move of Erdogan, Uyghur Muslims who flee from China and take refuge in Turkey will come under target. There is strong opposition in the Turkish parliament as well. It is increasing the support for the opposition as the country is abandoning the co-religionists at a time when Erdogan has claimed to be their champion.

In all probability, one of Erdogan’s two high-profile political challengers may overthrow his brutal regime. We are talking about two Turkish female politicians- Meral Aksener, head of centre-right Iyi Party and Canan Kaftancioglu, Istanbul head of centre-left CHP.

Read more: Not the Turkish Army but either one of Meral Aksener and Canan Kaftancioglu will overthrow Erdoğan.

Aksener and Kaftancioglu reflect two different ends of the political spectrum and ideology, yet both are becoming a potential threat to Erdogan. Aksener is a nationalist leader and a part of Turkey’s political elite, on the other hand, Kaftancioglu is a more liberal leader representing Turkey’s main opposition party, CHP that has a centre-left ideology.

All the stars are starting to align and as on the one hand, Erdogan’s love for China has backfired massively. The country is up in arms against the prospects of Erdogan kowtowing to China. And as other opposition leaders too, are gaining popularity, the deal if goes through, will be the death of Erdogan’s caliph dreams and will cost him his chair.