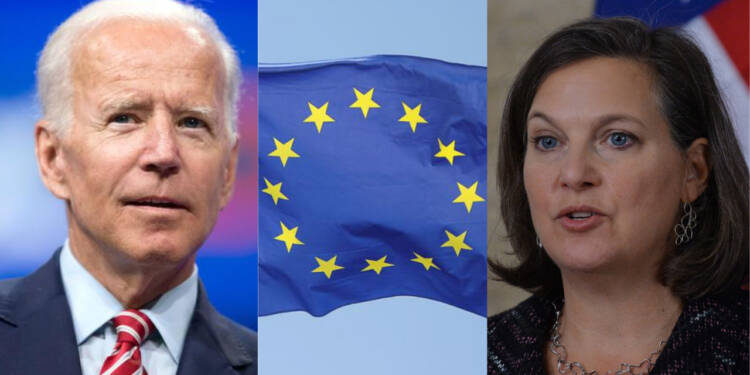 The relations between the EU and the US had soured as Trump demanded responsibility from the EU and showed tough love, but now things seem to get a lot trickier as Joe Biden plans to place Victoria Nuland as Secretary of state for Political Affairs.

Biden’s pick, Nuland is a staunch democrat, still entwined in Cold War politics of the 1950s, a proponent of aggressive NATO expansionism and proposes further encirclement of Russia which would spark a deadly arms race. Along with Trump, states like Sweden, Finland, Austria and Ireland have all denounced NATO despite rising Russian belligerence. Sweden’s top defence official had stated a few days ago that staying out of NATO was the best security option for the country even with an increasingly assertive Russia.

Moreover, as EU edges closer to China with the massive investment deal, Nuland being picked as undersecretary of state for political affairs by Biden will unnerve a few in the EU as Nuland will look to aggressively counter Russia rather than an increasingly belligerent China.

Earlier this month, Politico reported that Joe Biden’s transition team has decided on a new group of foreign policy and national security advisors. Veteran diplomat Victoria Nuland is his pick for the position of undersecretary of State for political affairs. The position is the 3rd most powerful position in the white house in regards to foreign policy and affairs.

Biden’s pick had served under Dick Cheney, former Vice President in the Bush administration, and had played a key role during US occupation in Iraq from 2003-2005, a decision which the NATO did not support.

Read More: Dark agents of the Deep state of America descend over Washington DC as Trump’s era nears the end

Moreover, Nuland’s infamous phone call with US Ambassador to Ukraine, Geoffrey Pyatt, where she was heard plotting to remove the elected Ukrainian President Victor Yanukovych and her disgust at the EU encapsulated in the famous line “F*UCK the EU” will send alarm bells ringing throughout the European Union.

The leaked phone call of Biden’s pick underlined two things, The United States’ plot to overthrow the democratically elected government which resulted in a civil war which led to the death of approximately 13,000 people and left Ukraine as the poorest country in Europe, and it also underlined Nuland’s blatant disregard and disgust for the EU.

Nuland’s actions and the resultant consequences sent US-Russia relations into a dangerous free fall, which was relatively halted by Trump; she achieved it from a relatively junior position as Assistant Secretary of State for European and Eurasian Affairs. Now with Nuland returning to the White House as the #3 of Joe Biden, she could be even more influential and turn EU into a battleground.

Obama and now Biden, institutionalised politicians working to appease the deep state agenda have appointed advisors and administrators which have exercised aggressive war politics such as in Libya and Syria. Nuland is an administrator of the same crop.

Read More: Near-complete withdrawal of US troops from Afghanistan will be Trump’s final fatal blow to the Deep State

Nuland’s husband, Robert Kagan, with her help, released an article in the New Republic titled “Superpowers don’t get to retire” and called for a more aggressive foreign policy to wage war against US’s challengers to exorcise the fears of a multipolar international arena, the US could no longer dominate.

Moreover, her muscle for the coup in Ukraine was allegedly backed by Oleh Tyahnybok’s neo-Nazi Svoboda Party. This was the same Tyahnbok who once applauded the Ukrainians for fighting Jews and other ‘scum’ during the Second World War.

Nuland’s appointment could only make matters worse for the US-EU relations. After the infamous leaked phone call, Angela Merkel, the German Chancellor, called for her resignation but to no vain, signifying the deep state agenda that has permeated the institutionalised politics in the United States.