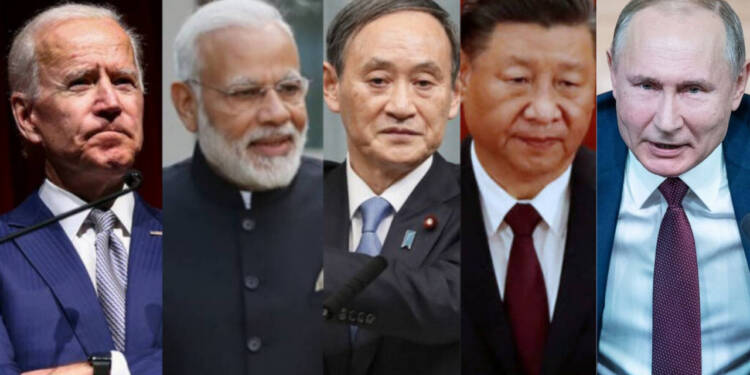 Biden has finally come to power in the United States. One of the many perceived implications of his rise to power is that it is bad news for the Russian President Vladimir Putin. When Trump was in power, the White House was too occupied in punishing China and Russia wasn’t really facing too much of American hate. But with Biden, the US is expected to go soft on the dragon and harsh on Russia.

The popular opinion is that Moscow will warm up to Beijing to set off the pain that Biden is going to give to Russia. But that might not be the case. Sounds strange? Let’s understand how it will work out.

From a strictly Russian perspective, it is simply not sustainable to remain close to China and help it rise even further. If and when Biden drops the ball against a rising China, what choice will Putin have? We say Russia will have to take matters in its own hands. And when it does so, it will have to join hands with the other two Indo-Pacific leaders, India and Japan.

Once, Russia understands that the US under Biden, has quite clearly let China off the hook, then Putin will have no one else to rely upon but the other two big Indo-Pacific leaders.

Now, why can’t Russia sustain the strategy of leveraging China against the USA? Because the dragon is a threat to Russia and a persisting concern of sorts. Take China’s new avatar as a net defence exporter, for instance. Gone are the days when China needed the Russian Defence equipment. Now, Beijing’s reverse engineering industry simply keeps stealing Russian military designs, and the shoddily copied defence products are then shipped off to other parts of the world.

To put it simply, Beijing is exploiting Russia and eating into the Russian defence industry’s global market share. And China will keep doing that unless Putin finds a way to completely decouple Russia from China. And then, the defence industry is just an example. China is also looking to eat into Russia’s geopolitical or geostrategic influence in regions like Central Asia and the Arctic.

Now, till the time, the US, India and the Quad, were busy countering China, Russia kept silent. The Kremlin stayed silent because the US-led anti-China activism helped Moscow too, and that too without directly antagonising China. But now, Russia is deeply cornered. It needs to come out in the open against China to help the Indo-Pacific countries, especially India and Japan. In turn, India and Japan can help Russia when it comes to investments in its Far East.

Without the US, it might not be possible for India and Japan to take on China decisively. So, they need external help and with the changing geopolitical equations, don’t be surprised if that help comes directly from Moscow.