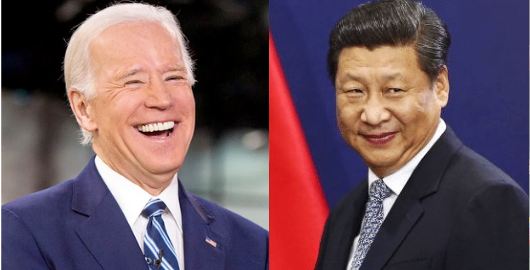 US President Joe Biden’s policy on China has had two sides. On one, he acts on and on the other, he regurgitates from the Trump era for lip service for the allies of the United States. But as already mentioned, Biden has provided US allies with nothing more than punitive lip service in their conflict with China. His actions so far have revealed that his aggression on China will not be reflected in his actionable policies.

While the members of the administration have been speaking for a continuation of Trump’s foreign policy, at least in parts, the Biden administration is going ahead with dismantling and undoing all the feats that the Trump administration had achieved. By doing so, Biden has created unnecessary punitive conflicts with its allies, while, at the same time, have put US allies under tremendous security pressure, for example, aggressively pushing for the resumption of the nuclear ties with Iran is a major security risk for other states in the region. Moreover, the same has been the case with major US allies around the globe.

According to an article in the Financial Times, Biden is trying to unite Europe and Quad countries against China. However, it is also a fact that Joe Biden is trying to undermine US alliances. Looking at the statements of the Biden administration, it can be said that they are moving ahead with Trump’s policy, but the USA’s actions under Biden suggests otherwise.

The first example could be seen in the case of Japan-US relations. As soon as Defence Minister Llyod Austin took the office under the Biden administration, it was clarified that the USA is committed to the security of the Senkaku Islands under the defence agreement of the two countries. However, a Pentagon spokesperson later made it clear to the media that the US does not accept Japan’s authority over the Senkaku Islands.

Not only that, the US has decided to reconsider its troop deployment in Indo-Pacific which would severely hamper US ties with Japan. Under the new US Indo-pacific policy, all tangible military resources such as warships and stationed troops will be deployed in other areas for a “much better safety net.” The US’s new Indo-Pacific policy will compromise the US’s commitment to Japan’s security.

Furthermore, moving onto West Asia, the Biden administration has taken a similar stand. Biden expressed his support for the Abraham accord after coming to power. “We fully support the normalisation of relations between Israel and Arab Muslim countries,” he said in a statement. However, Biden has angered Israel and Arab countries by embracing Iran to such an extent that Israel and the Arab states now appear to be in a silent diplomatic rift with the USA.

One of the first foreign policy decisions which Biden took after assuming the office was to review the US-UAE security agreement, effectively putting the sale of the F-35 fighter jets to UAE on hold indefinitely. Moreover, Biden’s aggressive push for resuming the nuclear deal with Iran has put the security structure of the region at immediate risk and the peace achieved by the Abraham Accords is withering away.

Moreover, Biden has jeopardised US relations with Saudi Arabia as well. In its recent judgement, the Biden administration made public the important confidential documents related to the assassination of Saudi-origin American journalist Jamal Khashoggi, after which the US has also announced sanctions on some Saudi officials.

According to the documents, the instructions for the murder of Jamal Khashoggi came from Mohammed bin Salman (MBS).

Besides, earlier into Joe’s reign as the President of the US, his administration announced that they will give more attention to Saudi’s King Salman than MBS for diplomatic talks with Saudi Arabia, which could further escalate tensions in the Saudi-US relations.

The Biden administration has also taken the same stand on India. “The new government will work on improving its relationship with New Delhi,” US Secretary of State Antony Blinken said in his first statement, “The US-India relationship has always been the full support of both the parties”. However, despite this, Biden made a call to the Indian Prime Minister Narendra Modi nearly 20 days after becoming president. Not only that, an American think tank has announced that India is no longer a free country under the current Indian government.

There is a clear difference between the words of the Biden administration, which implores to seek a convincing stand against China, but the actions have fractured the harmony between the USA and its allies achieved under Trump. By insinuating unneeded tensions, Biden has empowered China. Fortunately, the countries are not entirely dependent on the United States in their bid to deal with China.

Biden finally realizes that Japan and India are too strong to be bullied, starts damage control