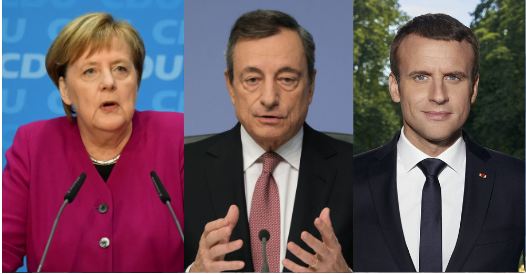 German Chancellor Angela Merkel’s retirement means that there will be a shift of power in the European Union’s leadership. Emmanuel Macron has always envisioned a strong leadership position for France in the EU, and with a strong ally in power in Italy, Macron is ready to lay claim on the EU leadership unilaterally.

French President Emmanuel Macron and German Chancellor Angela Merkel have been synonymous with the European Union leadership. Constantly sparring but leading the European Union unanimously, they have been the pillars of EU’s continuity. But with Merkel stepping down as Chancellor, Macron is eyeing a sole leadership role for France and with the appointment of the new Italian Prime Minister Mario Draghi, a close companion of Macron, France will have a strong ally in the EU and can finally fulfil its ambitions of the leadership position Macron has always envisioned.

Mario Draghi’s appointment as the Italian Premier was praised as good news for Italy and the EU with wide support by most, if not all, political parties. This is good news for French President Macron, too.

Draghi’s appointment offers the French leader a partner in Rome who is a strong and reliable supporter of closer European integration at the time Germany is preparing for a leadership transition. Draghi and Macron might become Europe’s new power pair when Angela Merkel bows as German Chancellor.

While Paris and Rome have not been the closest of allies in recent times splitting over Italy’s non-commitment to more pro-European policies. However, relations improved drastically after Rome took a more pro-European turn under Giuseppe Conte’s second government.

Speaking to Financial Times last month, Macron said that he was not looking forward to the routine, where, “Paris dances with Berlin, making Rome jealous, and when Berlin doesn’t behave nicely enough, Paris goes off and dances with Rome.” This change of heart and a hint of scepticism to dancing between the two states show that Macron is ready to have his chance at the leadership role within the EU and Italian Prime Minister Draghi can help achieve it.

In March of last year, France and Italy were among nine signatories to a letter calling for a “shared debt instrument released by a European body” to aid pandemic-affected countries. It was the cornerstone of the EU recovery fund strategy devised by Paris and Berlin and ratified by all 27 EU member states as Next Generation EU. This was Macron’s greatest European accomplishment so far and a significant move forward in European integration since the advent of the euro.

Italy became the biggest beneficiary of the EU recovery fund and a lot rides him, not just uplifting the domestic situation which has been devastated since the pandemic but also outline his more pro-European image which will make a big positive impact on European integration but more importantly it will drastically improve Macron’s leadership bid.

Enrico Letta, former Italian Prime Minister and now dean of the Paris School of International Affairs at Sciences Po had said, “Macron today has shown leadership with Next Generation EU. That was not the case with Sarkozy 10 years ago. That was to keep under the German umbrella and avoid any risk. It was good for France, but the price to pay was that Europe didn’t have any solution to the crisis.”

Marta Dassù, a former deputy foreign minister and chairman of the Aspen Italia think-tank says, “Draghi is in favour of more European integration, combining national responsibility with European solidarity.” Investing in the EU recovery fund wisely will be of utmost importance for Draghi to achieve credibility and for Macron to lay a unilateral claim over the EU’s leadership.

If it goes wrong, it will raise questions about Italy’s capacity to stay in the eurozone. Moreover, it will smear the notion of the EU pooling sovereignty in exchange for greater unity.

Macron has been pushing for an autonomous policy for the EU. He has voiced support for more integration among the EU states and less dependency on an unreliable United Sates under Joe Biden and Merkel’s favourite China.

Macron is seeking change, and thus, has been fighting Islamist terrorism, and extremism to unite the EU while at the same time, is also pushing hard against the US’s leadership syndrome. Macron wants to lead the European Union and show them a better immigration policy and wants the EU to regain lost narratives in the International structure and pursue its multinational interests as a unified bloc.

With a strong ally in Draghi, Macron can finally have the support he needs to oust Germany from the seat of power. Merkel’s successor will be facing a very different European Union where Germany would have lost its provincial leader status to France. With Macron and Draghi working hand in hand, a change in leadership after years of stagnation will be a welcome change.