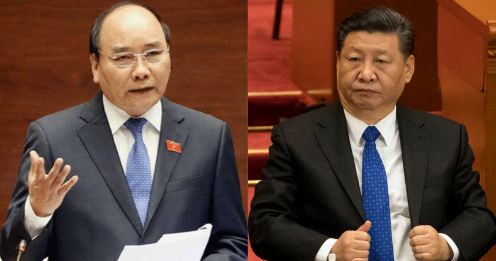 Nguyen Xuan Phuc, was formally sworn in as the President of Vietnam on Monday. After serving as the Prime Minister for the last 5 years Phuc has now been elected as the President. During his Prime Ministerial tenure, Phuc was lauded for Vietnam’s successful handling of the Coronavirus and he became a massive pain in the Chinese posterior with his anti-China policies.

Vietnam has become one of the fastest growing ASEAN economies and after Quad’s formalisation, Hanoi became the hub of Quad’s anti-China activity due to its increasing economic influence, bitter past with Beijing and most importantly, its intent to take on the paper dragon. Phuc has been leading Vietnam’s charge by meeting with various Quad states during his tenure a Prime Minister to keep Chinese belligerence in Check. Nguyen Xuan Phuc is now the President of Vietnam and is in no mood to stop his anti-China policies.

Phuc, 66, served as Prime Minister of Vietnam for the past five years, during which time the economy grew rapidly and his government’s Covid-19 response received praise both at home and abroad. He received the most votes in the nearly 500-member rubber-stamp national assembly after secret voting on Monday.

Vietnam is governed by the Communist Party, which is headed by the general secretary, president, and prime minister, with the 18-member politburo making crucial decisions. Vietnam is undergoing its twice-a-decade leadership transition, with 76-year-old Nguyen Phu Trong re-elected as party general secretary, the most strong of the three posts, in January. Trong, who had held the presidency since 2018 after the sudden death of his predecessor, stepped down, leaving Phuc as the sole nominee for president.

The National Assembly said earlier this was “the first time ever a prime minister was nominated to the position of the president”. Phuc told the nation after being sworn in that he was “lucky and honoured” to be given the role, which is now second only to Trong in the power escalator. Members of the Politburo are normally supposed to retire at the age of 65, but Vietnam has made an exception for both of them.

During his tenure as Prime Minister, Phuc played a key role in engaging with India and other Quad states to take on China. With an eye on China as their common neighbour as well as aggressor India and Vietnam had increased dialogues and engagements to increase bilateral commitments in military, trade and commerce as well as people to people contact.

With Japan, Phuc had agreed with Japanese Prime Minister Suga, to cooperate on a number of issues, including growing Chinese belligerence in the South China Sea. During the time of the meeting, Suga did not shy away in underscoring Vietnam’s role as a “cornerstone” of efforts being put in realising a free and open Indo-Pacific. The Japanese PM also said that the two countries have agreed in principle on a military agreement which would allow Tokyo to sell defence equipment and technology, including patrol planes and radar, to the Southeast Asian nation.

Moreover, last year, Vietnam and the US inked a Memorandum of Understanding (MoU) which includes support for Vietnamese fishermen against illegal “intimidation” in the disputed waters of the South China Sea. Vietnam is also slated to receive a second US Coast Guard cutter this year so that it can match the Chinese build-up in the South China Sea. Washington rewarded Hanoi because the previous administration understood the importance of Vietnam as an ally in their relentless assault against China.

China is again trying to upset the dynamics in the South China, with the Philippines currently facing the Chinese on Whitsun reef. Phuc as Vietnam’s President will go a long way in dictating its foreign relations. With the USA receding from the region, Vietnam’s emergence as a an anti China force will be important to keep China in check in the region.

China deceived Obama at Scarborough Shoal. Now, it is testing Biden with a scuffle and a smokescreen at Whitsun Reef