Biden realises Abraham Accord can not be broken, after all, makes a U-turn on his UAE and Saudi policy 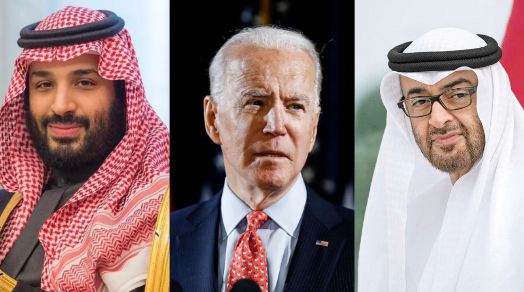 The amount of harm Joe Biden has done and intended to do to the USA’s Middle Eastern allies is catastrophic. However, even in the face of the USA abandoning the Gulf countries, Abraham accord countries and Saudi Arabia remained cohesively bonded, taking on any challenge that was put in front of them. Though it was Joe Biden who once criticised Saudi Arabia over its action in Yemen, in a reversal of the policy of sorts, the Biden administration has now deployed F-16 fighter jets and personnel to Saudi Arabia.

The Pentagon has dispatched approximately 300 US airmen and F-16 fighter jets to Saudi Arabia’s Prince Sultan Air Base for an “expeditionary force deployment.” The F-16s were sent to the Saudi base, marking the second deployment from South Carolina Air in the last 18 months, according to Air Force Magazine. The F-16s will be deployed for “several months,” according to the Saudi military, to “increase defensive capabilities against possible threats in the area.” The new powers will work with US allies in the Middle East to “deliver airpower where and when needed,” according to US military officials.

The deployment coincided with the announcement by the Biden administration that it would approve the selling of military equipment to Saudi Arabia for “defensive purposes.” On Tuesday, the US State Department reported that it would sanction $23 billion in arms sales to the United Arab Emirates, as it nears the end of a study of Trump-era weapons sales to the UAE and Saudi Arabia.

It was not even been a month in the White House for American President Joe Biden when he started on his path to destroy the legacy of his predecessor Donald Trump in the middle east region. The latest straw being the US pulling out of the Yemen war and leaving its ally Saudi Arabia in the lurch to fight the Iran-backed Houthi rebels. Furthermore, the Biden administration already has lifted sanctions on the Houthi rebels which were imposed during the Trump administration, thereby giving added cushion to Iran to pursue its geopolitical goals.

“This war has to end. And to underscore our commitment, we’re ending all American support for offensive operations in the war in Yemen, including relevant arm sales,” the US president said in a speech at the State Department. And just like this, the US had taken out its support to the Saudi Arabian regime and gave a free hand to the Houthi rebels.

Now as Joe Biden has realised the fact that the Abraham accord cannot be broken and the chain of events that Donald Trump had started have no end in sight, Biden administration is ready to make a U-turn on his Saudi Arabia and UAE policy. However, there are speculations that the US decision to authorize the arms sale to the UAE indicates Washington may be less willing to pressure its Persian Gulf allies as long as both Riyadh and Abu Dhabi pivot to less confrontational foreign and domestic policies.

“The White House could, however, revert to a more hardline position again if these governments deviate from US regional goals,” said a report published on Stratfor, an American research group. Biden realises Abraham Accord can’t be broken, after all, makes a U-turn on his UAE and Saudi policy.

Shocking but true: Biden’s Iran policy is being directed by Xi Jinping

China’s efforts to please the ASEAN chair, that is Brunei, go in vain as Brunei hobnobs with other ASEAN nations