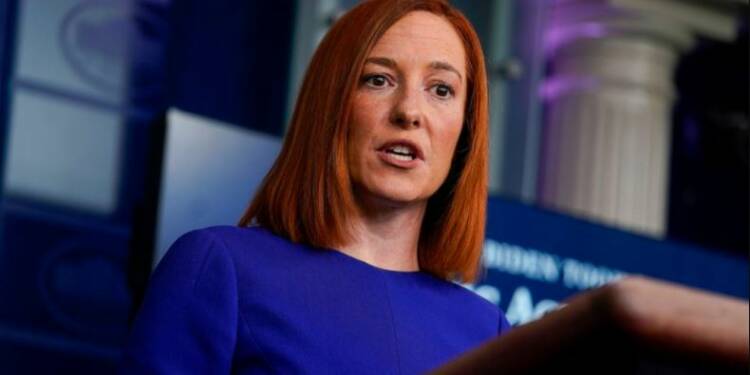 White House Press Secretary has made the most outlandish comments you would have heard in a long time time. Psaki has claimed that the Trump-brokered Abraham Accords between Israel and the Arab world were “dead on arrival”. So, the peace agreements between two of Washington’s main Middle East allies, which even the far-left Democrats could not criticise at the time of their signing are being described as useless. Facts and statistics, of course, demolish what Psaki said.

The material issue is not Psaki’s bleak understanding of international affairs and the Middle East, but that she represents Biden. What Psaki says reflects what Biden thinks. And her “dead on arrival” remark means that Biden will not go further with the Abraham Accords. So, countries like Saudi Arabia and Lebanon which were likely to sign future Abraham Accords wouldn’t be nudged to do so. Also, Biden would continue the policy of lukewarm relations with Israel.

The White House Press Secretary said, “Aside from putting forward a peace proposal that was dead on arrival, we don’t think they did anything constructive, really, to bring an end to the long-standing conflict in the Middle East.”

The context of Psaki’s remarks was not clear. But she did refer categorically to the Israel-Palestine conflict. So, it is quite convenient for the Biden administration. It couldn’t stop the ongoing Israel-Gaza conflict, so it can simply put the blame on Trump-brokered Abraham Accords.

But were the Abraham Accords really “dead on arrival”? Well, not really. Trump’s “peace agreements” between Israel and the Arab world continue to shine even though Trump is not in power and the Israel-Gaza conflict is escalating.

The UAE, for example, has warned  Hamas to stop its hostile actions against Israel, or else its planned investments in the Gaza Strip may not move forward. If the Arab world doesn’t approve of Palestine’s violent ways, it is only because of Trump’s Abraham Accords.

In fact, there has been an extremely significant change in Arab-Israel ties ever since the Abraham Accords got signed. In October last year, the UAE and Israel agreed upon 28 weekly flights between Tel Aviv and Abu Dhabi and Dubai. Unlimited charter flights also ply on the route. Biden administration has to be extremely myopic not to notice how the Abraham Accords are working.

The UAE is investing extensively in the Israeli economy, and Israel is investing in the Emirati economy. In March, Abu Dhabi announced a $10 billion fund for investments in several strategic Israeli sectors like energy manufacturing, water, space, healthcare and agri-tech. Last year, Israeli firms too had announced investments worth $500 million in key UAE sectors.

And the Abraham Accords were not merely transactional either. A country like Saudi Arabia, which did not sign a peace agreement with Israel but lent indirect support to other Arab nations, too hosted Israelis during the Dakar rally- an annual car racing event. The UAE is, in fact, tackling anti-semitism and the country is even showing tolerance for Jewish synagogues.

Similarly, Riyadh is removing anti-semitism and anti-zionism from textbooks in the country. All this is happening only because of the Abraham Accords which were brokered by Trump.

Biden administration thinks that Abraham Accords are not working, but Israel has been in talks with the UAE, Saudi Arabia and Bahrain to form a four-nation defence alliance. Trump’s Abraham Accords are literally encouraging the Arabs and Jews to gang up on Tehran.

The Abraham Accords were a bipartisan matter. Before Trump, even Democrats wanted to broker them but they failed. John Kerry, the US Secretary of State in the Obama administration, had declared that there would be “no separate peace between Israel and the Arab world” without resolving the Palestine conflict. Well, Trump made it possible.

Biden has failed in Middle East diplomacy, and therefore the White House Press Secretary is discrediting Trump-brokered Abraham Accords for controlling political damage to the Democrats. Yet, the Abraham Accords shine and continue to speak for themselves, as well as Trump’s diplomatic ability.