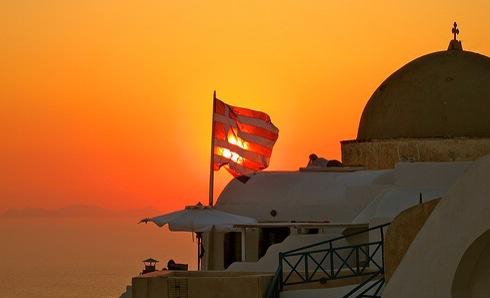 Greece was once arguably the greatest Western civilisation. The Greeks have been among the most consequential of people who have contributed so much to the world. Their Gods and heroes continue to fascinate people across the world till date. In the world of the 20th and early 21st century, however, due to a multiplicity of factors, Greece’s heft and influence dramatically decreased. Yet, what we are now witnessing is a great grand Greek revival, courtesy of the strong sense of nationalism which has come to grip the Greeks in recent times.

The main factor behind the renewed sense of Greek revivalism and growth of nationalism in the European country has been Turkey. Turkish aggression against Greece since 2016, especially in the Eastern Mediterranean is not an unknown affair. In fact, the issue most recently caught limelight in December 2020, when Turkey withdrew its seismic research ship, the Oruc Reis, from the Mediterranean Sea after the EU threatened to impose sanctions on Ankara. The European Union standing in firm support of Greece is just one among the many victories which the nation has scored against Turkey.

Greece has launched a diplomatic onslaught against Turkey. Recep Tayyip Erdogan really crossed a threshold in February 2020, when he made Turkey open its land border with Greece, actively transporting Syrian and other refugees and migrants to the Evros River, which separates Greece from Turkey, and encouraging them to cross. The Greeks were convinced after this incident that Erdogan was seeking a conflict with them.

So, Greece has been working on its alliances with European nations and also building new friendships with mutual countries that have faced the onslaught of Turkish aggression recently. Among the first consequences of Greece’s diplomatic war against Turkey was the launch of the East Mediterranean Gas Forum, which pulled together Cyprus, Egypt, France, Greece, Israel, Italy, Jordan and the Palestinian National Authority. The EU and the United States were made observers, and the UAE was given the position of a candidate member.

Turkey has been flexing its muscles in the Eastern Mediterranean as it hopes to soon stumble upon a natural gas gold mine, which would make the country independent of much of its energy imports. The launch of the forum was a stern warning to Turkey to behave itself, after which came the threat by the EU of stringent sanctions against Ankara. This year, Greece has been extensively engaging in diplomacy with like-minded countries to take the challenge head on.

According to Foreign Policy, with the return of the Greek foreign minister recently from a peace mission to Israel and Palestine and its prime minister having roved North Africa from Libya to Egypt, Greece is making a major diplomatic comeback. The foreign minister’s visit to Israel and Palestine also witnessed important stops in Jordan and Egypt. In April, meanwhile, Greece loaned missiles to Saudi Arabia while Prime Minister Kyriakos Mitsotakis flew to Tripoli to restore diplomatic relations with Libya in a landmark development for the region, and a devastating blow to Turkey.

Greece and Cyprus also have a lot of powerful countries backing them. France, for instance, agreed to supply Athens with warplanes in January and offered warships in March. Meanwhile, only this month, Greek Defense Minister Nikolaos Panagiotopoulos described relations with the United States as being at an “all-time high.”

Greece’s diplomatic might has put Turkey on the backfoot. Its allies and partners are ensuring that Greece becomes self-reliant and can ward off Turkish threats on its own in the near future. Essentially, Greece has been emboldened by the aggression of the supposed ‘Ottomans’. Greece is a formidable naval power and drives its inspiration from a glorious history of being so. Their sense of mastery in shipbuilding and their naval prowess has now come to be reflected in their diplomacy and defence outlook as well. Although. Turkey thought it could intimidate Athens, the great Greek empire seems to be rising against the Ottomans once again.