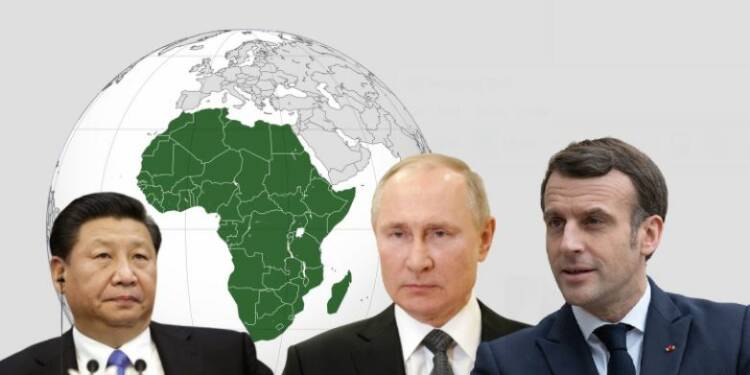 Russia and France are fighting it out in Africa. They are not physically fighting. The two powerful countries are fighting for influence in a region which many have begun calling the “continent of the future”. After practically having been declared an outcast by the United Stated-led Western world, Russia has of late been aggressively pursuing its strategic interests across the remainder of the world with renewed vigour. The African continent occupies a significant position towards that endeavour. French President Emmanuel Macron, on his part, is seeking to assume control over the European Union after German Chancellor Angela Merkel’s retirement.

Germany is the de facto EU leader. However, France is increasingly eyeing that position. To secure it, Paris’ influence must not remain contained to the European Union alone. That, coupled with the fact that Macron is trying to relieve France of its past baggage is playing a big role in it increasingly turning its eyes towards Africa. Russia is trying to economically get involved with Africa – and even in security terms, is playing a growing geostrategic role in the continent.

In the fight for influence between France and Russia – the loser has revealed itself. The one country which is taking a massive hit by heightened Russian and French interests in Africa is China. Already, China has been facing a lot of stress due to the fact that African countries are not toeing its line and not letting the paper dragon walk all over their sovereignty. What’s worse, they are not even paying up debts to China – leading to the Middle Kingdom cutting down on investments and loans to the African continent.

France is approaching Africa with repentance. French colonial past continues to haunt African countries, and Paris’ political establishment to this day. Most French leaders have always sidestepped the issue. Macron is different. He is taking the challenge head on and addressing France’s gory past in relation to the African continent. For instance, in Rwanda recently, Emmanuel Macron took a historic step towards strengthening ties with Africa.

By acknowledging France’s role in the 1994 Rwandan genocide, the French president sought to turn the page on 27 years of diplomatic tensions. 800,000 people were killed during the Rwandan genocide. Macron said, “I come to acknowledge our responsibility.” Macron is pursuing this policy of recognition on multiple fronts. During a visit to Burkina Faso in November 2017, he pledged to return African artefacts and art stolen during the colonial conquest. In 2017, during a visit to Algeria, Macron had referred to colonisation as a “crime against humanity”. Macron also acknowledged that Algerian nationalist Ali Boumendjel was tortured and killed by the French army. This acceptance marked a turning point in relations between the two countries. In 2020, France promised to return 26 artefacts to Benin as well as a historic sword to Senegal.

In the former colony of Ivory Coast, France is investing EUR68.5m, which is equivalent to US$83.05m, over the next five years to boost cotton production. France is taking proactive steps to boost the confidence of African countries, to help them trust Paris. France knows that without repenting for its past mistakes in the continent, it will not be able to make much headway in the region. Emmanuel Macron is a courageous leader who is not shying away from accepting responsibility for his country’s historical blunders, and the African countries are noticing the same.

On its part, Russia is getting heavily involved in Africa. Whether it be Mali – where Russia is said to be supporting the military junta which recently carried out a second coup in a span of one year, or in the Central African Republic (CAR) – where Russian forces are ensuring people remain safe from the vicious attacks of warlords and militia groups. Interestingly, the public in both countries seems to be supporting Russia overwhelmingly.

In Sudan, where there were reports of the government asking Russia to leave the Sudan Port after a unilateral annulment of a bilateral agreement on military-technical cooperation with Russia, it has now come to light that Russian involvement in the port will continue. That shows how Russia-African ties are stronger than believed by many in the media.

Russian exports to African countries over the past decade have shown a steady upward trend. If in 2010 exports were only US$ 5 billion (less than 1.5% of the total), then in 2019 – Russian exports to the continent stand at US$ 14 billion (3.3%). Over the past five years, Russian non-commodity export to Africa has consistently exceeded US$ 10 billion.

Earlier in May, Head of African Union Strategic Partnerships Levi Uche Madueke had remarked how the African Union places great importance on its ties with Russia and believes Moscow will play a key role in ensuring stability in the continent and facilitate the industrial development of Africa. Contrast this with Africa’s view of China, and one will realise how Beijing has lost favour with most African nations. Madeuke also informed that the second Russia-Africa summit would take place in 2022.

China, meanwhile, is losing Africa by a long shot. Yet, it is desperate to retain whatever little influence it has remaining in the continent. China is grabbing more business interests in the Ivory Coast. According to The New York Times, China financed the construction of a $30 million Museum of Black Civilizations in Senegal that will house African art that was plundered by European colonial powers and is slowly being restituted. China also opened its first overseas military base in Djibouti and has invested heavily in the nation’s infrastructure. It is no coincidence that France and Russia are also stepping up activity in countries having business interests with China, and subsequently turning such nations against Beijing. China’s plan for a fishing harbour in Sierra Leone has, meanwhile, been termed a “catastrophic human and ecological disaster” by stakeholders.

Within Africa, the anti-China sentiment has been rising for quite some time now. Not only is Chinese debt in Africa turning sour, but Chinese people too are being forced to leave the continent as locals cite fears of the paper dragon swallowing a tremendous quantum of jobs in the host countries.

China is slowly and steadily being made to realise that its African safari has no takers. What started as an ambitious expedition to colonise the African continent is turning into a bad-debt nightmare for Beijing. To make matters worse, China is now having to counter the growing influence of France and Russia in Africa, and it is losing embarrassingly in that battle.

After months of tough talks with China, the Philippines bolsters its defence capabilities majorly