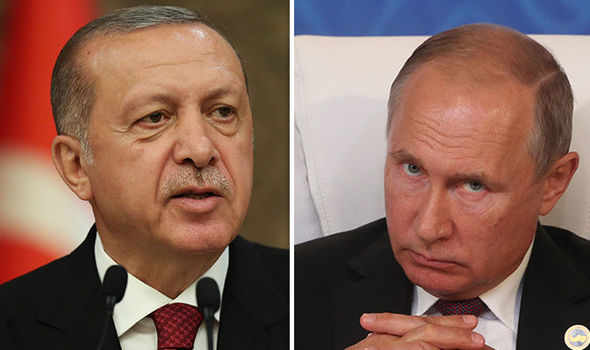 Turkey and Russia are the best of Frenemies. If there is a term which describes their relationship the best it is the term “Frenemies.” While Russian President Vladimir Putin drives his foreign policy to further the national interests of Russia, the Turkish President Recep Tayyip Erdogan drives Turkey’s foreign policy based on his cynicism. Erdogan’s foreign policy flip flops paint a picture of an arrogant little boy who acts on his whims. But there is a big difference between being an arrogant little boy and the president of a nation because when you are the President of a nation you are ultimately answerable to the people and to Erdogan’s misfortune the people have spoken and it is not good news for him.

According to a recent poll, nearly 79 per cent of Turkish residents would prefer their country to develop a relationship with Russia rather than the United States. If the alternative option is the United States, 78.9% of respondents chose Russia as Turkey’s principal partner in foreign policy and international relations, according to a poll conducted by Areda Survey between June 1st -3rd with the participation of 2,100 people.

The participants in the study also answered “yes” to the question “Do you think Turkey should work with Russia when conducting its foreign policy?” with a score of 64.1 per cent. “Do you think Turkey should collaborate with the US when pursuing its foreign policy?” the survey asked. “No,” replied 73.2 per cent of citizens. In the question “Which country would you wish Turkey to build more relations with?” you have the option of choosing between the United States and Russia. Russia received 78.9% of the vote.

Despite being on opposing sides in many regional conflicts, such as the Syrian civil war, the Karabakh dispute, and the Libyan crisis, Turkey and Russia have always managed to coordinate diplomatic efforts and find common ground for a settlement. Moreover, when US President Joe Biden referred to his Russian counterpart as a killer, Erdogan quickly jumped in with his two bits on the issue and slammed the US President saying, “Mr Biden’s comment about Putin does not suit a head of state.” He further praised Putin’s “smart” “classy” response in the whole diplomatic fiasco.

Ankara and Washington have clashed over a number of issues, significantly straining bilateral relations. These include Turkey’s acquisition of Russian S-400 air defence systems, as well as US assistance for the YPG, the PKK’s Syrian offshoot, and the US unwillingness to extradite Fetullah Gülen, the leader of the Gülenist Terror Group (FET). In the fight against Daesh, the United States has mostly worked with YPG terrorists in northern Syria. Turkey is adamantly opposed to the YPG’s presence in northern Syria, which has been a major source of friction between Ankara and Washington.

Read More: By selling attack drones to Ukraine and Poland, Turkey is dangerously provoking Russia and Putin’s reaction will be fierce

Despite its NATO ally’s security concerns, the US has sent military training and truckloads of military equipment to the YPG under the guise of battling Daesh. Turkey undertook its own counterterrorism operations, during which it was able to remove a considerable number of terrorists from the region, demonstrating that assisting one terrorist group to battle another is misguided.

Ankara, on the other hand, recently stated that Turkey’s relations with the US are not a substitute for its relationship with Russia. And the recent survey demonstrates why Russo-Turkish relations can never be replaced with that between Turkey and the US. The people of Turkey adore Putin and this has given Putin the upper hand over the cynical Erdogan.