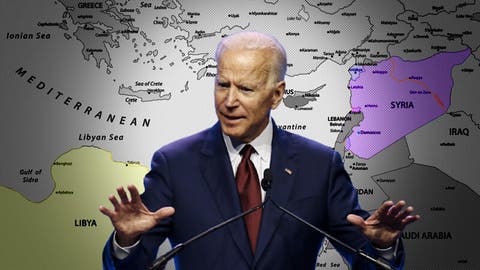 US President Joe Biden is a gaffe machine. He fumbles his words, stumbles on the stairs and even sometimes forgets which country he needs to cooperate with Russia. But he does so very confidently, just like he did during a G7 press conference on Sunday.

During a news conference at the G7 on Sunday, Joe Biden frequently mixed Syria with Libya when discussing ways to work with Russia. At the G7 conference in Cornwall, England, the 78-year-old gaffe machine spoke of working with Vladimir Putin to bring economic help to the people of Libya, causing some puzzled looks from the press corps.

‘I’m hopeful that we can find an accommodation where we can save the lives of people in — for example, in — in Libya,’ the POTUS said, mentioning the north African country for the third time instead of Syria, which is in the Middle East.

The White House later clarified that the POTUS was referring to Syria, which has been embroiled in a decade-long civil war with the United States and Russia have also been involved.

When he cited Libya, which most people would not place at the top of their list when sitting down to speak with Putin, some assumed he was confused. Although there are certain parallels between the two countries, such as civil war, Islamism, and military involvement by Washington and Moscow, these are merely superficial connections.

Lebanese geopolitical commentator Sarah Abdallah tweeted: ‘I guess when you’re bombing so many countries at once, it’s hard to keep up.’

The gaffe came only days after he referred to the Royal Air Force of the United Kingdom as the ‘RFA’ while speaking to US military members at RAF Mildenhall in Suffolk during his first-ever speech on British territory. Biden told US troops: ‘These partnerships have been hardened in the fire of war. Generations of Americans and service members fought them. Like the original Bloody Hundredth and those RFA pilots.’

As the POTUS gazed at troops positioned behind the podium at the military facility, his wife, First Lady Jill Biden, chastised him, telling him to ‘pay attention.’ The US commander-in-chief, who is the oldest person to ever hold the office of POTUS, has been questioned repeatedly about his mental capacity and suitability to be in control of the world’s largest nuclear arsenal.

During presentations or when answering questions, he is known to make blunders, mix things up, or even digress. In a spat over White House charges that Boris Johnson has ‘inflamed’ tensions in Northern Ireland in a disagreement with the EU over trade arrangements, British pro-Brexit politicians today dubbed him ‘senile.’

In March, when boarding Air Force One at Joint Base Andrews, the POTUS was witnessed stumbling three times up the stairs before finally reaching the top and saluting. Karine Jean-Pierre, the White House Deputy Press Secretary, later claimed that he had been blown over by the wind. Biden reportedly mistook his granddaughter for his late son, Beau, and referred to his vice president, Kamala Harris, as ‘President Harris.’ He also forgot the name of his Secretary of Defense, Lloyd Austin. His most recent blunder occurred on the final day of the G7 world leaders’ summit in Cornwall, southeast England.

Biden is set to discuss the Kremlin’s frayed relationship with the West, including cyberattacks on the United States, aggression against Ukraine, the jailing of dissidents and perhaps co-operation on Libya, err…. Syria.

With its foreign minister’s trip to Kenya, India has begun liberating the nation from China