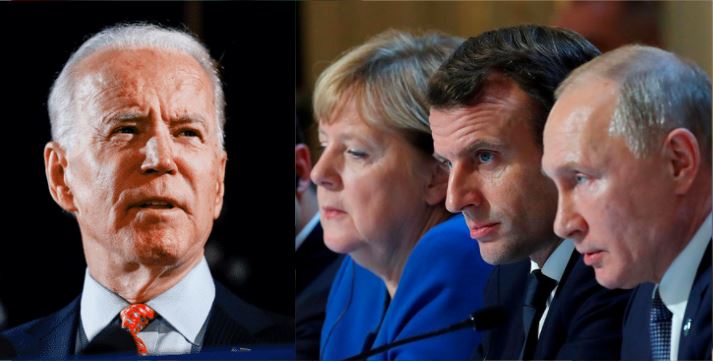 US President Joe Biden finds himself isolated over his Russia policy. In fact, the two main EU powers – Germany and France, seem to be snubbing Biden and forming their own Russia policy. As per the latest reports, Germany and France have proposed to invite Russian President Vladimir Putin to a summit with the Brussels-based intergovernmental bloc, in an attempt to reset ties with Moscow.

The timing of the latest proposal by German Chancellor Angela Merkel and French President Emmanuel Macron is crucial. Only a few days ago, Biden and Putin met in Geneva, for a bilateral summit. However, the initial enthusiasm generated by the summit in Geneva faded away soon, due to Biden’s doublespeak over his Russia policy and new sanction threats. Now, France and Germany are disowning Biden’s Russia policy, in order to formulate their own strategy.

In fact, a few days after the Putin-Biden summit, US National Security Advisor Jake Sullivan announced that the US was preparing a new package of sanctions against Russia over the controversy surrounding Kremlin critic Alexei Navalny and the Nord Stream 2 gas pipeline.

Sullivan’s remarks, of course, irked Russia and if Russia is getting even more antagonised towards the West, then Biden is to be blamed. Yet, France and Germany are signalling that they don’t want to get clubbed with the United States in its Russia policy.

In fact, Macron and Merkel are making a huge departure from the recent EU policy towards Moscow only in order to distinguish themselves from Biden. The EU hasn’t held a summit with Putin after Russia annexed Crimea in 2014. On the contrary, the EU imposed several sanctions on Moscow. Even presently, Poland and Baltic nations, as well as many EU diplomats are opposing the Franco-German proposal to hold a summit with Russian President Vladimir Putin.

Yet, Paris and Berlin understand the need to engage Putin, at a time when the US President is constantly annoying and antagonising the Kremlin. Reuters quoted a senior EU diplomat as saying, “We need to have a discussion about how to get away from this negative spiral … but we need to advance united.”

France and Germany understand that they have different interests. Biden or other anachronistic politicians in the US may not agree, but the transatlantic relations between the EU and the US have changed drastically in the post-Cold War period. Now, the interests of the US and the EU do not match, especially when it comes to Russia.

Firstly, France and Germany understand that if tensions between the West and Russia spiral out of control, then the US will not have much to worry about but the European Continent will come in direct line of fire. Both Merkel and Macron would want to avoid a situation in which the EU has to bear the consequences of Biden’s dangerous double-speak towards Russia.

Also, the US and Germany have a completely different perception of projects like the Nord Stream 2 gas pipeline, an ambitious project to supply natural gas from Russia to Germany. But the US doesn’t fancy a European Continent dependent on Russian gas resources. In fact, Biden has sanctioned ships involved in building the gas pipeline project. Clearly, Biden and Merkel are not in agreement about the key gas pipeline project.

The EU is therefore being made to take a different line from Biden’s Russia policy. Even if there is some resistance from a few stakeholders, Macron and Merkel are trying to distinguish Europe from Biden’s confrontational Russia policy. And this effectively leaves the US President isolated.

Kamala is trying to outfox Trump by racing to the southern border first. Basically more fodder for Trump’s speech