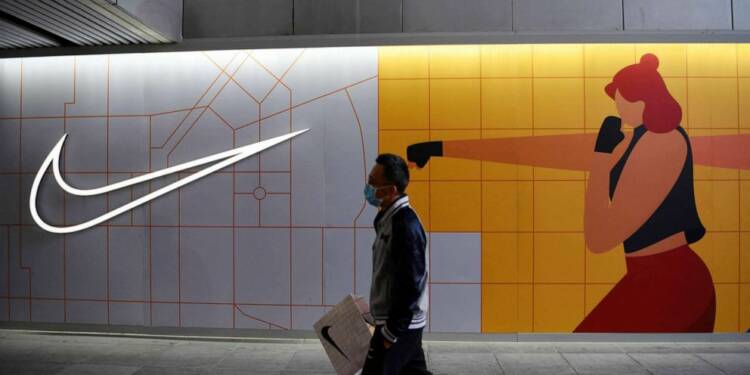 China has long realised what the most capitalist companies in the USA are loyal to, and that is money, not the country of their birth. Since China is the biggest high-end consumer market, many companies capitulate to its demands and are even ready to swear loyalty to the Chinese Communist Party. The latest example being Nike, which has made some startling comments, which go beyond the expectations to appease China and Xi Jinping. Nike CEO John Donahoe called the sportswear apparel giant a “brand of China” this week, months after the sportswear giant had been entangled in a fiasco in China over its statements expressing concerns about human rights abuses committed in Xinjiang province by the Communist government.

These comments, which are a way of kowtowing to the Chinese authoritarian and a way of showing their loyalty; will in many ways cost Nike as a company the markets of Europe, the USA and India. One needs to remember that these are the very markets that have provided the profit margin large enough to outdo the low profits in China. And as Nike, as a company, continues to kowtow to China, going ahead, it may cost them the US, European and Indian markets. China has grown increasingly important to global consumer companies, especially as its population of more than 1 billion gains upward mobility and spending power. At Nike, China generates a growing portion of global sales, while North America — still its biggest market — continues to lose prominence.

“We are the largest sports brand there, and we are a brand of China and for China,” Donahoe said. “And the biggest asset we have in China is consumer equity. Consumers feel a strong, deep connection to the NIKE, Jordan and Converse brands in China. And it’s real.” Donahoe went on to remark that the company planned to keep investing in its China operations because revenue in the fiscal fourth quarter was higher than expected. Its sales in China fell short of Wall Street forecasts.

Recently, in a promotional video for the latest Fast and Furious film, the actor and former professional wrestler, John Cena, characterised Taiwan as a country. China, which considers self-governing Taiwan to be part of its territory, reacted angrily to the interview.

John Cena apologised for referring to Taiwan as a country while promoting the next instalment of the “Fast & Furious” franchise, “F9.” On the famous Chinese social media platform Weibo, the actor and professional wrestler apologised in Mandarin on Tuesday. “I made one mistake, I must say right now, very important, I love and respect Chinese people,” Cena said, according to BBC News. “I am very sorry for my mistake. I am so sorry, I apologize.” Cena made his first remark during an interview with Taiwanese broadcaster TVBS. Taiwan will be the first “nation” to witness the ninth instalment of the “Fast and Furious” franchise, according to the 44-year-old.

In this context, the latest apologetic and borderline allegiance-esc remarks by Nike CEO John Donahoe tell us a trend of the capitalist companies and franchises of the US becoming more concerned about not offending China whatever the cost may be.

Read more: “You can see him,” China power bombed John Cena and the champion is absolutely clueless

Stifel analyst Jim Duffy reaffirmed the above-consensus sales and earnings targets for the quarter. “The business has capacity for higher sales growth and gross margin expansion (we model +12% y/y and +310bps y/y), though we expect NKE positions guidance conservatively at the outset of the fiscal year, establishing a beat-raise cadence as FY22 unfolds,” Duffy wrote in a note. “Supply chain issues and early quarter demand in Greater China pose two discrete risks, both of which we believe are short-term considerations.”

In view of all this, while Nike is putting its future in the hands of China, going all out to appease CCP and Xi Jinping for continued trade, the fact that the future may be bleak for Nike is not out of dispute. Given its no holds bar capitulation to China, it may lose the other big markets like India, Europe and the US itself.