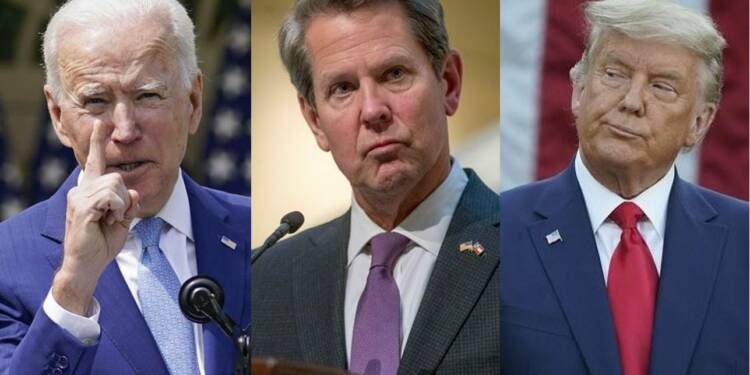 Georgia is being sued by the US Justice Department over the state’s new voting restrictions. It could help Republican Gov. Brian Kemp, who signed the amendments into law earlier this year, in his reelection campaign.

The DOJ’s efforts, according to sources close to Kemp, are a welcome step forward for the governor, who has spent months defending himself against Donald Trump and the former President’s attempt to overturn the election results in 2020. Kemp now faces a more palatable foe in the Biden administration. “Gifts come in all sorts of packages these days,” one person close to Kemp told CNN of the DOJ’s lawsuit.

Kemp signed the bill in March, which adds stricter voter identification requirements for absentee votes, gives state officials the right to take over local election boards, and restricts the use of ballot drop boxes. After Georgia turned blue in the 2020 presidential election and the Senate runoffs, the first-term Republican was under pressure from the right to tighten the state’s voting restrictions.

The “Election Integrity Act,” which was introduced as part of a Republican-led drive to modify voting laws across the country, was seen as an attempt to soothe a conservative backlash against the governor. It immediately became a rallying cry for proponents of voting rights. Activists, led by Kemp’s 2018 opponent, Democrat Stacey Abrams, have filed their own lawsuit challenging the law. The rule sparked a backlash from businesses, prompting Major League Baseball to move its All-Star Game from Atlanta to Denver this summer in protest.

But Kemp and his conservative media friends countered the liberal response by accusing corporate America and Major League Baseball of becoming “woke” and exposing more restrictive voting rules in progressive states, a move that Republicans in Georgia say helped unify the GOP troops around Kemp.

Nonetheless, state Republicans were leery of Trump, who continued to rail against Kemp, calling him a “RINO” and threatening to endorse a primary opponent in 2022. While Trump’s team has struggled to identify a challenger for Kemp, Republican operatives have expressed concern about how Trump’s rhetoric could influence Kemp’s reelection campaign, preparing for a possible visit by the former President to the state in the coming months.

The move by the Biden Justice Department, on the other hand, provides Kemp with a clear Democratic target on which to direct his rhetorical fire. According to CNN, this will make it more difficult for the former President to criticise a conservative governor who is explicitly opposing the Biden administration on the important issue of “election integrity.”

“This guy (Kemp) should go buy a lottery ticket,” said one Georgia GOP strategist. “Between this and the All-Star Game debacle, his stock with GOP primary voters is skyrocketing like a damn Reddit meme stock.”

Even Democrats in the state feel the case benefits Kemp. “Pretty good for Kemp,” said one Democratic strategist in Atlanta. “It is a badge of honour that he will take to the nomination.”

The governor appears to be making the best of the situation already. Kemp claimed the lawsuit was “born out of the lies and misinformation the Biden administration has pushed against Georgia’s Election Integrity Act from the start,” in a defiant statement Friday.

Kemp accused the administration of “weaponizing the U.S. Department of Justice to carry out their far-left agenda that undermines election integrity and empowers federal government overreach in our democracy.”

The Republican concluded by stating that as Georgia’s secretary of state, he had previously won two election-related challenges against the Obama administration’s Department of Justice. “I look forward to going three for three to ensure it’s easy to vote and hard to cheat in Georgia,” Kemp said.

Meanwhile, Trump’s reaction to the news is confused. The former President made a statement on Friday afternoon in which he attempted to condemn both the Biden administration’s lawsuit and Georgia Republicans such as Kemp.

“The PEOPLE of Georgia should SUE the State, and their elected officials, for running a CORRUPT AND RIGGED 2020 PRESIDENTIAL ELECTION—and for trying to suppress the VOTE of the AMERICAN PEOPLE in Georgia,” read Trump’s statement in part.

Some in Trump’s inner circle are concerned about the optics of his battle against Kemp, who is widely regarded as one of the country’s most conservative governors and was largely praised by Republicans for reopening the state early during the coronavirus pandemic. Most other personalities and groups loosely linked with Trump’s political operation, in particular, have tended not to share Trump’s antipathy toward Kemp.

Joe Biden was outraged by Georgia’s enactment of the “Election Integrity Act of 2021.” In response to the new Georgia election legislation, Biden indicated support for moving the MLB All-Star game out of Atlanta.

Furthermore, Biden has been consistently lying and spreading blatantly false information about the law and its intended consequences. The President had previously wrongly implied that the new Georgia law would deny people of colour the ability to vote, equating it to the Jim Crow laws, which were enacted in the 19th century to legalise racial segregation and disenfranchise Black Americans in America’s South.

Biden, on the other hand, has recently surpassed even his own remarkable talent to lie. The President’s brazen show of ineptitude was so egregious that even the Washington Post was forced to ‘fact-check’ him.

Rather than ‘healing’ and ‘uniting’ America, Biden is openly dividing the country. It’s hard to imagine sitting President echoing calls for a boycott of an American state solely because of its political decisions. Corporate America is likewise responding to the left-leaning White House’s demands because they have no choice. This is what the United States’ democratic principles and freedom have been reduced to in 2021. But with the mid-term elections approaching his actions against Georgia will have graver consequences, as Democrats might lose the slim majority they have over at the Senate and the House of Congress.

Japan may be all set to recognise Taiwan, deputy Defence Minister drops a major hint